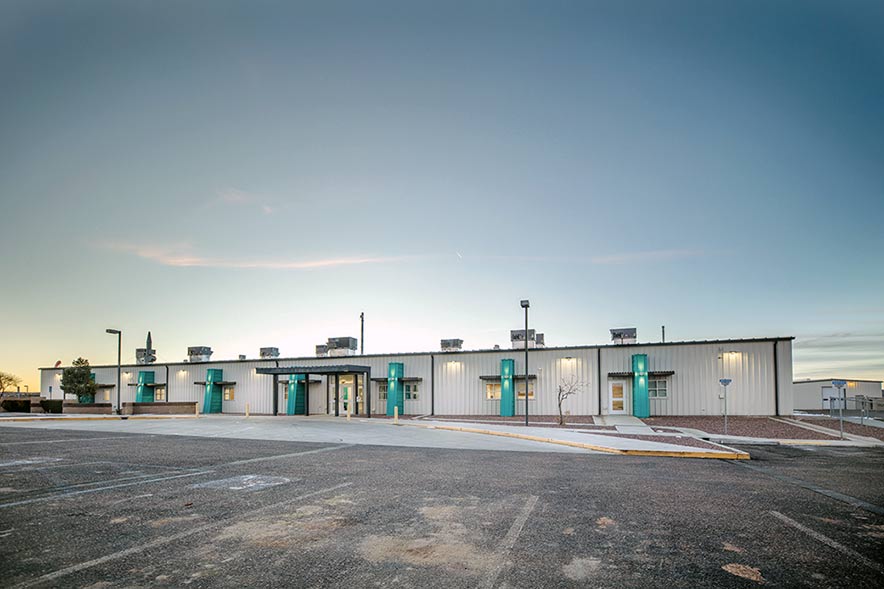 Courtesy photo | Fort Defiance Indian Hospital Board
The Nahata Dziil Health Center in Sanders, Ariz., has been closed due to the coronavirus pandemic.

The Fort Defiance Indian Hospital Board is receiving some backlash from the community — and its Council delegate — for closing the Nahata Dziil Health Center.

To slow the spread of COVID-19 and protect patients, health care workers and the community, the board temporarily closed the Nahata Dziil Health Center as well as outpatient services at Tséhootsooi Medical Center on March 20.

At TMC, essential services, including the emergency department, pharmacy refill services and obstetrics have continued, but the focus has been on handling the influx of COVID-19 patients, said FDIHB Marketing Director Dallas Ellsworth.

“Our main goal is to make sure our staff and patients are safe,” said Ellsworth. “We have an obligation of providing patient care and we’re obligated to provide as safe as an environment as we can.”

Ellsworth said that the primary reason for shutting down the Nahata Dziil Health Center in March was the shortage of personal protective equipment.

“At that point we did not have adequate supplies of PPE to ensure our providers could be protected across the board in all of our facilities,” said Ellsworth.

“People are wanting to have the clinic open,” said Delegate Raymond Smith. “They don’t want to go to Fort Defiance because they’re afraid of COVID-19.”

TMC is in fact at full capacity for treating COVID-19 patients, Ellsworth confirmed.

Smith said it’s not just Nahata Dziil but the surrounding communities that depend on the clinic.

“There’s no sense in driving all the way to Fort Defiance or Gallup for services that could be rendered here,” he said.

“They could make it a non-COVID operation,” suggested Smith.

He said as a Public Law 93-638 facility they have a responsibility to serve the community.

“Our folks down here need it, so what are we going to do about it?” he asked. “We have a lot of people who utilize the clinic saying, ‘Why is it closed? What’s going on?’ They say the clinic shouldn’t be closed because it provides essential services, and I agree.”

Ellsworth explained that at the beginning of the outbreak of the virus on Navajo, the hospital was trying to go through vendors to get supplies, but they were back ordered.

Since then, TMC has received PPE through the U.S. Indian Health Service, the Navajo Nation, and through other donors, said Ellsworth, but the PPE burn rate for medical providers is high.

They also started a “sewing task force” to make masks and gowns for their staff, he added.

As far as N95 and K95 masks, he said, those must be certified effective before they can be used.

Ellsworth said they have been trying to gain enough PPE to sustain a 90-day supply. And while they have been engaged in preliminary conversations about what reopening the center would look like, he said, they do not feel comfortable doing so yet.

In the meantime, they have chosen to centralize services in Fort Defiance because they are able to control the flow of patients and perform infection control more easily.

Ellsworth confirmed that patients who would regularly be seen at the Nahata Dziil clinic can come to Fort Defiance if they need medical attention.

Tso said the commission passed a resolution addressed to TMC, the Fort Defiance Indian Hospital Board, and the president’s office saying that the clinic has breached the agreement it has with the community.

“During this COVID-19 pandemic, patients are required to travel to the Tséhootsooi Medical Center in Fort Defiance, and enter the medical center where people that are exposed to coronavirus are being screened, treated, exposing themselves to the virus,” the resolution states.

The resolution suggests that patients should at least be able to pick up prescriptions at the Nahata Dziil clinic, even if it’s curbside.

Tso says TMC has not made an effort to work with the greater Nahata Dziil community.

“They have not reached out to leadership locally as to how we can work together and help them,” said Tso. “We’ve had no idea what they’re doing. That’s where they are failing us.”

Tso said leaders also wrote letters to the FDIHB asking for a meeting.

“Even they have not responded to us,” he said.

Ellsworth said they are gathering and evaluating re-opening plans from other Navajo Nation departments in considering reopening the center.

He said they need to look at the entire scope of things as far as PPE and amounts of testing kits available.

“We need to walk through patient flow and make sure we’re screening everybody and that we have infection control protocols in place,” he said.

Ellsworth said it’s all about finding a balance between reopening services and keeping people safe in the face of ongoing PPE and testing shortages, as well as new information related to the virus.

“It’s almost like a new challenge every day,” he said.

Meanwhile, they are also providing telemedicine appointments from TMC, which can be accessed by calling the center’s phone number, he said.

This service is available to current patients who have records in the system, but they are working to open up the telemedicine option to the broader public, he said.

Ellsworth also explained that the TMC Emergency Department is split into respiratory and non-respiratory sides to separate COVID-19 and other patients.

Intake is being done outside in tents, he said.

Ellsworth says if someone is having an urgent medical issue like a broken bone or infection, they can definitely come to the Emergency Department at TMC.

Smith said it’s hard to believe that it has been three months since the pandemic began and there are still shortages of supplies.

“There should be PPEs and all kinds of equipment by now,” he said. “What about all the donations that are coming in? Where are the records of all that?”

He suggested there should a full and transparent accounting of the PPE that has been received through the various entities on the Nation, including the command center, so that the inventory can be matched up with the remaining and ongoing needs.