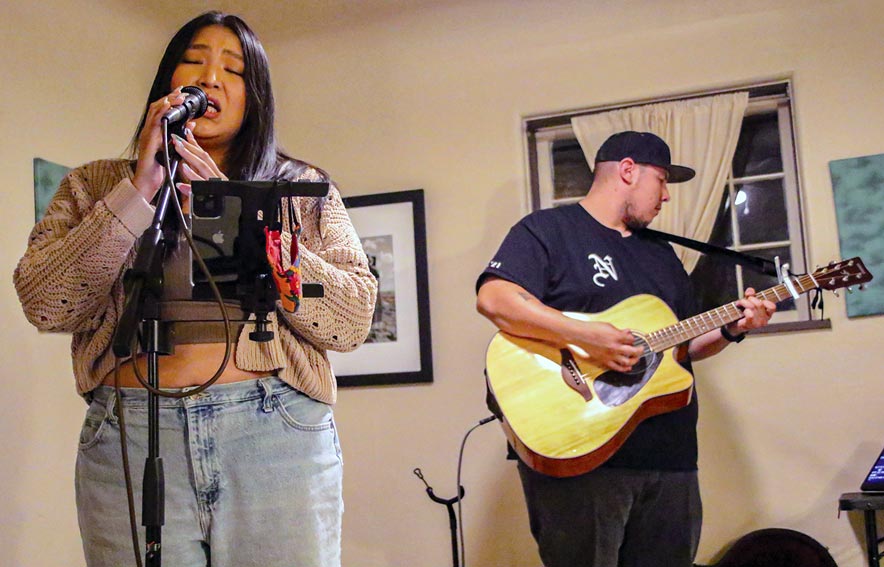 Rising Diné artist Nanibaah sang soul songs with a big voice in the newly opened Encore Cafe on the evening of June 21.

Deeanna “Nanibaah“ Talley, 23, has sung since she was toddler and grew up listening to soul, R&B, and traditional music.

She gained inspiration and encouragement from listening to her father figure and grandfather who were both singers. Which led to her singing professionally in the year of 2016.

Her father figure, George Ford, helped Nanibaah sing and take her music to another level as she was starting out.

Ford was a pastor, singer, played instruments and had his own band. The two would sing together on a daily basis.

“He (George Ford) definitely taught me everything I know, as far as taking music to another level,” she said, “It (singing) became a spiritual thing to me.”

Her grandfather, Eddie Johnson, was a traditional Navajo singer and had a major influence on her as well.

“I definitely listen to them, learn them, and sing them throughout the day,”she said. “That’s kinda my sanctuary and where I can relax and be stress free.

“I don’t have to worry about anything and there is no pressure in that line of music,” she said. “That’s why I like to keep them separate and not mix them.”

A few music artists that also had a huge impact on Nanibaah are Aretha Franklin, Etta James, Alicia Keys and Ari Lennox.

Naanibaah enjoys listening to interviews of her favorite artists, which guide her on her musical journey.

“The way they talk about their personal lives or what they went through as children, I think that’s important when you draw emotion and experience into your music,” she said.

“Watching and listening to their interviews definitely helps me understand their music more and it means more to me,” Nanibaah said. 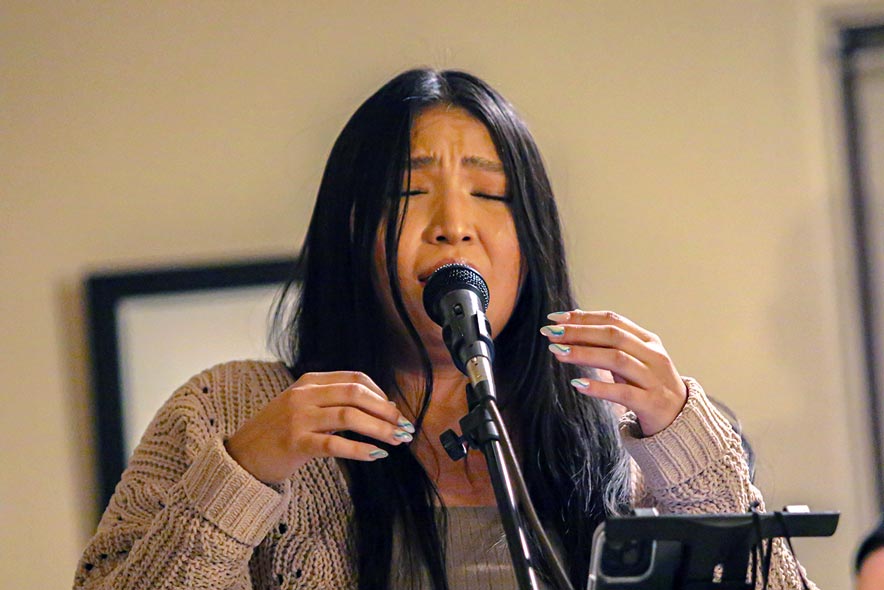 Navajo Times | Cyrus Norcross
Nanibaah sings the last song of her set on Jan/ 21 in Encore Cafe. The song she is singing is called “My Mind” by Yebba.

Nanibaah’s upbringing was not all sunshine and rainbows. She grew up without her biological father, dealt with sexual abuse, was homeless, starving, and watched her mother struggle.

Throughout her struggles in life, Nanibaah would do her best to stay motivated and maintain a positive image of the future.

“I would think, I can get out of this, maybe not right away” she said, “But I can do something where I never have to stress about these little things in life.”

Many of the negative experiences she has been through is what helps her write music. Her fans are able to connect with her on a personal level because of what she writes about and how she inspires others.

“There’s one thing I try to pass on to people,” she said, “You don’t have to be perfect, you don’t have to come from a perfect background in order to make something of yourself.”

“I just hope that everyone will be able to encourage themselves and take on a bright spirit,” she said.

Singing allows Nanibaah to heal, be creative, not worry about anything and to be free. She enjoys being able to connect with her audience through her voice, emotions and spiritually.

“Singing gives me a sense of freedom, I feel like I can fly, it’s a safe space for me, I’m not afraid of anything,” she said.

“This is something I will always be grateful for and I will always take care of it,” Nanibaah said. “I don’t see this (singing) as something that is going to make me money. It’s a blessing.”

Moving forward, Nanibaah would like to put out an album in the near future, become an independent artist, and buy her mother a house.

She will be traveling to Los Angeles to perform at Softer Sounds on Jan. 29. Nanibaah helped put together the line-up which consists of Tia Wood, Itzcalli, Emei and Niya.

Softer Sounds is hosted by the Women of Color Collective and will be located in Vitawood.