A settlement with Sunnyside Gold Corp. and its Canadian parent company, Kinross Gold Corp., over the Gold King Mine spill was agreed to recently.

Sunnyside and Kinross will pay $45 million to the U.S. and Colorado. The U.S. will dismiss its claims against both companies.

In addition, the U.S. will also contribute $45 million to the continuing cleanup at the Bonita Peak Mining District Superfund site.

The companies, under the agreement, will dismiss claims against the U.S.

A consent decree, which the U.S. District Court has not yet entered in Colorado, details the settlement.

Under the consent decree, cleanup operations will continue for contamination caused by the August 2015 spill, which dumped three million gallons of toxic metals into the Animas River.

Contractors hired by the EPA caused the spill while using heavy equipment to explore an opening at the mine site for future cleanup operations.

The orange-colored plume made its way into the San Juan River, which runs through the Navajo Nation. The plume eventually made it to Lake Powell in Page, Arizona. 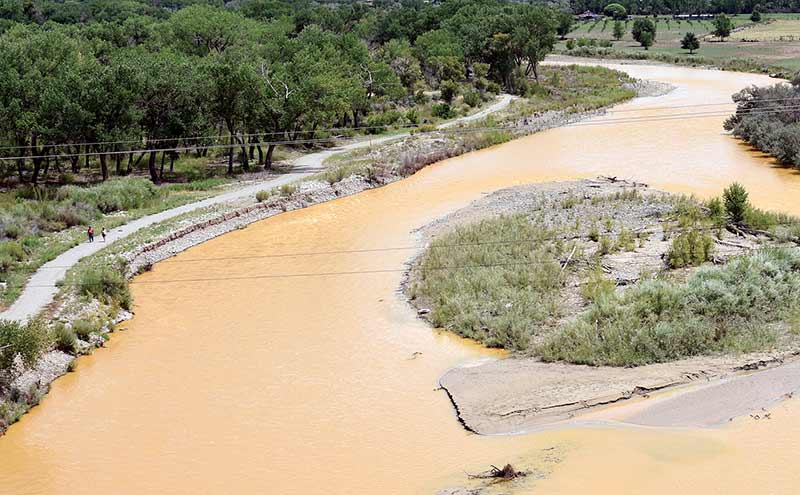 Navajo Times File Photo
A man and a woman, left, walk along the bank of the Animas River and San Juan River confluence in this Aug. 2015 file photo after a spill by the Gold King Mine.

Sunnyside doesn’t own the Gold King Mine. It never owned nor operated the Gold King, said Gina Myers, director of reclamation operations at Sunnyside. The company is not a fault for the EPA-caused spill.

Sunnyside operated the Sunnyside Mine, located next to the Gold King Mine (another site in the district), from 1986 to 1991, when the mine closed.

Todd Hennis is the owner of the Gold King. It was his mine that discharged the wastewater while the EPA was working on it.

In an EPA news release, Tommy Beaudreau, deputy secretary of Interior, said that the mining companies that put tribal communities at risk must be held accountable.

In January 2021, Sunnyside and Kinross reached a $10 million settlement with the Navajo Nation with no admission of liability or wrongdoing. The spill caused Navajo farmers along the river to stop using the water.

Then Navajo President Russell Begaye told farmers the tribe would sue the federal government. Barack Obama was U.S. president at the time.

More than 300 Navajo farmers filed lawsuits claiming they suffered when the spill forced them to stop using the river water to water their fields. In May 2021, the U.S. District Court in New Mexico dismissed their claims. Kate Ferlic of Egolf, Ferlic, Martinez, Harwood LLC said the dismissal would be appealed.

According to the EPA, ongoing cleanup at the Bonita Peak Mining District Superfund site continues, which has already spent over $75 million on cleanup work.