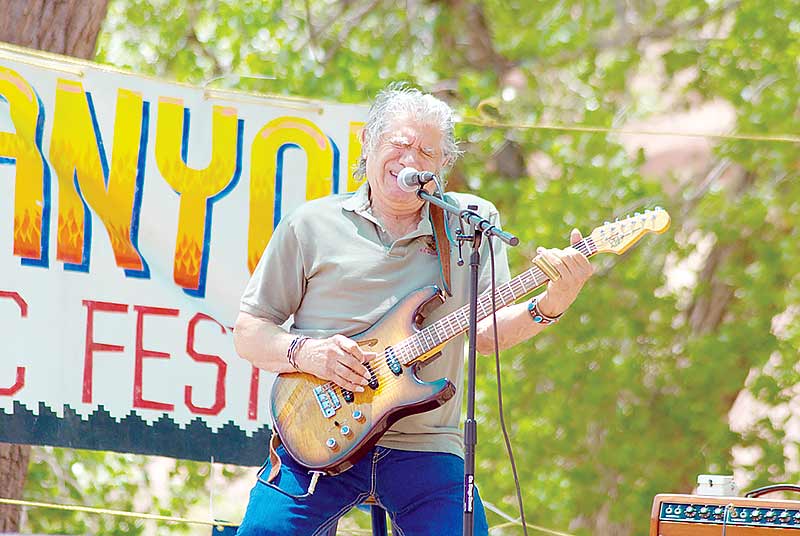 Visitors in the canyon over the weekend kicked off the summer with a day of art, design and music at the 7th annual Rock the Canyon Art & Music Festival.

The Shonto Tourism Group provided a “Rock the Community” appreciation cookout and put on the astounding, “Rez Car” Show, now in its third year.

Called “a form of art” by it’s founders, the Rez Car Show saw seven competitors vying for the prestigious, “Rezziest Rez Ride” title. And to win, each entrant had to be accompanied by a rez dog.

The winners from the past two shows were Erik “Cheeto” Laughter and his rez dog Clare.

Laughter and Clare won the inaugural event in 2013 with a rickety, 1996 Toyota Corolla he called “The Phoenix.” They won the event again last year with a 1989 Ford truck he called the “War Pony.”

Shonto Community Governance president Elizabeth Whitethorne-Benally, who is one of the festival founders, has said that even if a vehicle is pushed to the show that it would be accepted.

Using a Sharpie marker, local native Shonto Begay draws Kayenta-based band Skool Boy Kook on a white canvas during their performance at the Shootinglady Pavilion on June 6. The 7th annual Rock the Canyon Art & Music Festival brought a number of artists and musicians from throughout the region. (Times photo – Krista Allen)

“Even if it’s held together by wires, has different tires, has a loan battery, or it’s really loud; making noise or backfires, or if your lazy dog that doesn’t want to go after the sheep is sitting in the vehicle; borrowed a dog or picked one off the road,” she explained.

“It’s not a rez vehicle unless there’s a dog in it,” said entertainer James Bilagody, who was the master of ceremonies. “The ts’í’lii (little) dogs are the most valuable.”

On Saturday, the event began at the Shootinglady Pavilion with a free, hearty Rock the Canyon breakfast of pancakes and Spam – a meal provided by the Shą́ą́’tóhí veterans.

Hundreds of people attended the festivity throughout the day that featured at least a dozen Diné bands and singers from across the region.