The roster for the Page wrestling team is going to be relatively thin this year.

Due to COVID-19 the Sand Devils will suit up five wrestlers, including a pair of freshmen.

“It’s going to be a challenge,” Page interim head coach Dakota Richardson said. “In a typical year, we would start out with 40 wrestlers, but some of our kids didn’t come out.”

Richardson, a 2017 Page alumnus, cited the current pandemic as the chief reason for the low turnout. 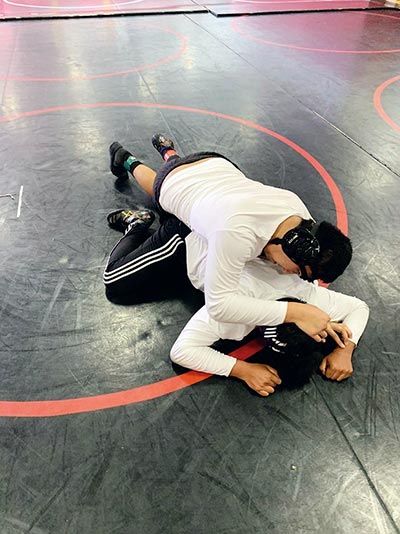 “They’re worrying about bringing COVID back to their grandparents,” he said.

In addition, he said some kids do not have the means to take part in their two-hour practices during the day, especially the ones that live at least 45 minutes away.

“We do have some kids that want to wrestle but their main concern is getting to practice,” he said. “Currently, we don’t have any buses for those kids who usually wrestle for us in places like Coppermine.”

Despite the low numbers, Richardson said he’s honored to take over the program for one season after head coach Kyran Keisling and assistant coaches Matt Penrod and Steve Smith decided not coach this season. They based their decision to not coach on concerns for the safety of the elderly and vulnerable populations.

“I’m grateful they’re giving me their blessing for me to run the program despite these tough times,” said Richardson, a two-time state reserve champion. “I’m really looking forward to it. It’s pretty exciting and we’re definitely working hard on the mat and they’re working hard with their grades.”

Page will fill five of the 14 weight classes with senior Amacio Valenzuela wrestling at 220, junior Dineh-ashkii Green at 160, sophomore Hayden Charles at 195 and freshmen Landon Farley at 120 and Tairick Tadytin at 285.

“We have a really young team,” Richardson said, noting that that Charles is the only letterman with varsity experience.

“He’s the most veteran guy we have on the team,” Richardson said.

“He’s a really tough kid,” he said of his senior wrestler. “He’s a strong kid and he’s looking good.”

Richardson is also expecting some great things from the two freshmen, Tadytin and Farley.

“They’re very talented,” he said. “I think they can go far this season.”

And while his team has been practicing, the Sand Devils will have to wait another six days before they’ll see their first competition when they travel to Mayer on Feb. 10 for a dual. Following Mayer, the team is headed to Round Valley on Feb. 12.

“It’s a little late but the kids are itching to do something,” Richardson said, while acknowledging that most programs have already had at least three matches this season. “My five boys are looking forward to the season. They’re wanting to get cut weight and get back into shape.”

With their first competition around the corner, Richardson is hopeful that his kids will be prepared.

“I’m trying to get all the techniques down for them and we’ve hit the weight room as well,” he added. “We’re trying to do all that while condensing all our training within a month.”

To help mimic what a real match looks like, Richardson said they held an inter-squad wrestling match last Saturday at practice.

“We treated it like it was a real match,” he said. “The kids wrestled and we coached them along the way. I think it went really well as far as them getting in some matches.”

In the abridged season, Richardson said they have eight duals scheduled, which will include four home matches.

Per the Arizona Interscholastic Association, all the wrestlers in Division IV will make state, which is scheduled for March 11 and 12 with a site to be determined.

In the other divisions, however, a sectional tournament will be held to determine the state qualifiers.

“Everyone in our division will be at state,” Richardson said. “I believe it’s due to the low numbers for each school. Some schools don’t have the numbers like they used too.”