The Society for Research on Nicotine and Tobacco elected Dr. Patricia Nez Henderson, from Teesto, Arizona, as incoming president starting this month. 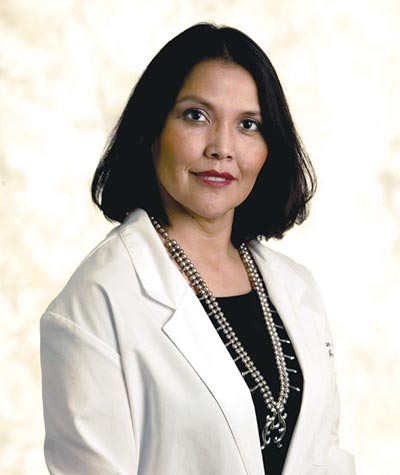 She will serve as president for one year. The organization’s rules allow the elected president to serve on the board for three years.

The society includes scientists, medical doctors and other professionals from 40 countries.

“It is my honor to have been nominated as the first Indigenous president for (the society),” Henderson said, “and yet a distinct achievement in the recognition of years of work to be elected by my peers.”

In 2021, the society awarded the John Slade award to Henderson for outstanding contributions to public health and commercial tobacco control.

Henderson received a scholarship from the society in 2006, at which time she became a member. Four years later she joined an advisory committee where she served for eight years.

She was later invited to join the society’s task force on racial equity, which reviewed internal polices for new steps for wider involvement and more ethnic representation.

After 14 years with the society, in 2020, she co-founded the Indigenous Circle to serve Indigenous scientists from around the world.

She said that social injustice and racial inequity promote the use of commercial tobacco among American Indian and Alaskan Native populations who have the highest rates of cigarette smoking in the U.S.

Henderson is a 1990 graduate of the University of Arizona with a bachelor’s degree in biochemistry. In 1994, she earned a master’s degree in public health from Yale. In 2000, she received a doctorate in medicine also from Yale.

In the year of her graduation, Yale created the Patricia Nez award, to be given every year to a Yale medical student who is committed to improving health among Native Americans.

Originally from Dził Abe’é, located in Teesto Chapter, Henderson faced hardship. Her family was devastated by forced relocation through the Navajo Hopi Settlement Act of 1974.

The family was forcefully relocated to a one-acre home site, losing their original home, grazing use area, and livestock.

“It followed me all the way to college,” Henderson said. “I would go home and see my family, especially my father and mother, in deep sadness. Their entire way of living and knowing were literally stripped from them.”

“While he was speaking to the entire audience,” she said, “he looked directly at me, and said in Navajo, ‘Don’t ever forget where you come from.’”

She was encouraged by those words and in 2000 she became the first Indigenous woman to graduate from Yale School of Medicine.

Henderson worked to change Navajo law in 2008 on smoking in public. The Navajo Nation Council passed a law that was vetoed by then-President Joe Shirley.

Henderson’s fight was aimed to protect the youth at early age, whom the tobacco industry targets.

Last year the Air is Life Act was introduced to the Navajo Nation Council and President Jonathan Nez signed the new legislation into law, which went into effect in February.

“As I prepare for the presidency (of the society), I look back over the long road,” Henderson said. “My challenge is to every young Navajo – don’t always take the pathway of least resistance.

“The hardships we have faced as Navajo makes us all stronger,” she said. “Remember, greatness is already in your DNA.”

Henderson is also vice president for the Black Hills Center for American Indian Health in Rapid City, where she resides with her husband Jeffrey, also a physician-scientist.

He is an enrolled member of the Cheyenne River Sioux Tribe. They have two children – Zahlanii is at the University of Arizona and Mato is graduating from high school in May.