Water warrior goes with the flow

Dorothy Denetclaw is usually the one people turn to for help. There’s not much that rattles this wise grandma and retired tribal employee. But this time, she didn’t know what to do.

She was relaxing at her home atop a mesa in Indian Wells, Arizona, when livestock started to gather at the windmill a hundred feet or so from her home. This is not unusual, of course – livestock always mill around the little trough fed by the windmill.

But this time, they just kept coming. Denetclaw counted 50 cattle and about half as many horses, shoving each other away from the trough and congregating in her yard.

Investigating the situation, she found the trough was completely dry and the livestock were getting agitated. They acted like they might stampede. It was kind of scary. Who ya gonna call? 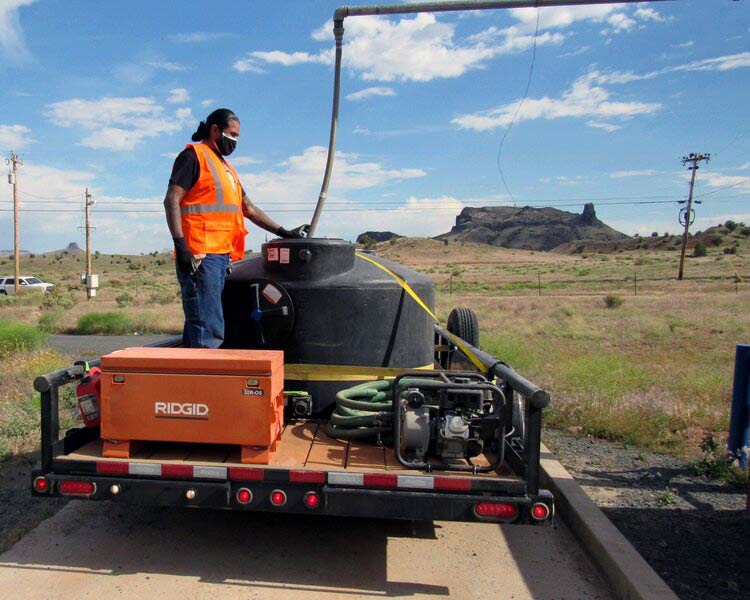 She tried everyone from her chapter on up to the president’s office. “No one’s answering!” she said in a desperate phone call to the Navajo Times. This reporter tried Water Resources, which didn’t even seem to have voicemail.

Finally Denetclaw decided to just drive around and look for help. She and her grandson ended up at the Dilkon Chapter House, where she saw two trucks parked with water tanks.

“I drove straight up to them, demanded to talk to their supervisor,” Denetclaw recounted on her Facebook page. “A Navajo guy walked up to me. Without hesitation I told him about the dry windmill, that the cows and the horses want water. He was nice, told me he was going to follow.” She had happened upon the right person.

The “Navajo guy” turned out to be Zoel Zohnnie, 42, Táchíinii born for Tl’izi Lani, the founder of Water Warriors United. Zohnnie’s mission in life, since he was laid off from his boilermaker job just as the COVID-19 pandemic hit the reservation, is to bring water wherever it’s needed. “He brought water to the dry windmill,” posted Denetclaw. “Thank you thank you thank you shiyaazh she’aweeh Zoel Zohnnie for helping us.”

If you poke around social media, you’ll find dozens of testimonials like Denetclaw’s. But like any self-respecting heroes, Zohnnie and his water warriors don’t wait around to be thanked. They’re on to the next delivery.

Tuesday marked 600 barrels of clean drinking water they’ve delivered to almost every corner of the reservation – more than 126,000 gallons. “We’re on the road from sunup to curfew,” Zohnnie said in a telephone interview between deliveries in the Tuba City area Tuesday. “If it weren’t for the weekend curfews, we’d be out there Saturday and Sunday too.”

Like many ideas, good and bad, during the pandemic, this one started out of boredom. Zohnnie’s a hardworking journeyman who likes to stay busy and quarantining for three weeks after his layoff was killing him.

Zohnnie started a PayPal account and raised enough money to buy 275 gallons of water. “I found out where the elders lived in the Shiprock area,” he said, “and just drove around making deliveries.”

Although he now lives in the Four Corners area, Zohnnie’s roots are very rural, in Coalmine Mesa and Rocky Ridge, Arizona. He’s no stranger to having to fetch water. Still, he was surprised how close to the edge some elders were living.

“Some homes didn’t even have barrels,” he said, “just five-gallon or, in some cases, one-gallon containers.” By this time the money was flowing in, more than he had ever expected, so he went to Farmington and “bought every water barrel in town.”

“A bunch of people offered to donate used barrels, but I didn’t have time to clean them and I didn’t want to be introducing bacteria to the elders, so I turned them down,” he said. “To this day we insist on brand-new water barrels.”

Zohnnie and the volunteers who were starting to show up to help him scoured the shops in Albuquerque, Gallup, as far away as Prescott looking for good deals on new barrels. Then the warriors caught the attention of the Native Hope organization, which named Zohnnie one of its “COVID-19 Fellows” and gave him enough money to buy a flatbed trailer and a 550-gallon water tank.

From then on, “everything grew really fast,” Zohnnie said. Today Water Warriors has four delivery units and four full-time volunteers in addition to Zohnnie, plus a number of part-timers who help out when they can, including a woman who has a full-time night-shift job and volunteers during the day when she’s not sleeping, Zohnnie’s brother-in-law who makes trips out from his home in Oklahoma, and a recent high school graduate.

On May 12, Pam Arthur of Flagstaff joined the team and she and Zohnnie worked together to form a nonprofit, Collective Medicine, to administer Water Warriors as well as other projects. Other team members are Larita Stevens, administrative assistant; Joi Lynch, administrative intern; and drivers C.B. Barton, Leon Curley and Patric O. Bohan.

In the works are a wood-hauling effort for elders and Wristbands for Rez Kids, which raises money to buy carnival-entry wristbands for needy children (assuming we ever have carnivals again). A future project may be to establish alcohol rehabilitation programs on the reservation, which Zohnnie sees as a pressing need. “We have some pretty big dreams,” he said.

Collective Medicine has been criticized for doing things the tribal government should be doing, but Zohnnie doesn’t see his efforts as letting the president, Council and chapters off the hook. “We’re actually doing this to put them ON the hook,” he said. “Hopefully they’ll look at us and see what can be done,” he said. “NTUA needs to step it up a little. The tribal government needs to get their hands dirty.”

At this point, Zohnnie is volunteering his time, but eventually he hopes Collective Medicine will raise enough to pay him and his staff a small salary and be his new career. Even after the pandemic clears up, he notes, people will still need water, and if that need is magically met, the organization is flexible enough to turn its attention to the next thing.

Ultimately, what the Water Warriors are delivering is hope. “Our people are near desperation level,” Zohnnie said. “They’re in desperate need of some positive news.”