Benally: Farmers free to plant what they want

San Juan River Farm Board President Dineh Benally has declared that the farms on the Navajo Nation are not tribal entities but rather belong to individual farmers who can plant whatever they wish.

This declaration came during a somewhat bizarre and contentious Tuesday farm board meeting.

Benally has been under scrutiny recently with his large hemp greenhouses built in the communities of Shiprock, Gaadahi, and Hogback. Not to mention his disregard of Navajo Nation Attorney General Doreen McPaul’s lawsuit against him. 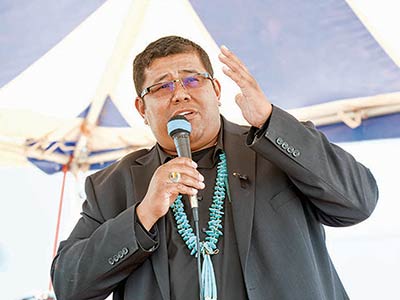 Navajo Times | File
Dineh Benally, shown here in a file photo, says the Navajo Nation has no jurisdiction over what farmers can grow on their land.

“That’s the reason why what we are dealing with is going to litigation,” he said. “They are finding out the farmers waking up.”

In what sounded like a campaign speech, Benally gave a timeline that brought him to what has become large-scale hemp production that has divided the community, the farm board, and has made residents, farmers and school district officials nervous of not just the growth of hemp but also of the people manning the gardens.

“We, as a farm board, stand behind our agriculture development,” said Benally. “We voted on it democratically. In, 2000, the late Ervin Keeswood sponsored a legislation to move forward with hemp cannabis on our farm. It was passed by the 88 councilmen … the president, Kelsey Begaye, signed it into law. Twenty years later we are making their dreams come true. This is in the best interest of the Navajo people.”

Benally continued, saying in 2015 they gained support from local chapter and farm boards and, in 2019, the San Juan River Farm Board passed its own regulation on how to manage hemp production after which they sent their “package” to the U.S. Department of Agriculture. “United States Congress, Donald Trump removed hemp from the controlled substances,” said Benally. “Yet, we still have peyote as a controlled substance. We are moving forward with this new agriculture. Where we want to provide opportunity and jobs for our people.”

“Navajo Resolution No. Co-75-18 also states that, ‘The enactment of this resolution does not authorize the cultivation, growth, possession, development, or propagation of industrial hemp until the Navajo Nation created a regulator system for industrial hemp and obtains the necessary and applicable permits for industrial hemp,” stated the complaint.

Residents, local farmers and some tribal officials aren’t the only ones concerned. The Central Consolidated School District board has spoken loudly about their concerns regarding the hemp farms.

During a July 16 board meeting, the CCSD board said they have been in discussion with the Navajo Department of Justice for clarification on zoning requirements and other regulation of these hemp farms because they are close to nearby schools.

“Obviously the community is concerned as well as we are with our students,” said CCSD board president Gary Montoya. “The concern is not just with the community, but the school board, is the proximity with some of those hemp farms so we are trying to get clarification on zoning as it applies to community and reservation.

“It’s going to take some time to get some information on what they are doing and how they’re doing it,” he said.

Montoya said he reached out to delegate and Law and Order Committee Chair Eugenia Charles-Newton on a couple of occasions but had not received much of a response. As a school board wanting answers, but not wanting to get entangled in the issue, they believe that coming together as a board they can get the answers they want and “possibly have them (farms) removed.”

During the farm board meeting, residents brought up another major concern: the non-Navajo workers brought into the communities to tend to these greenhouses and farms. Mobile home trailers have been reported on farmlands without home-site leases, proper sewage, and at times had not gone through the proper probate process. These mobile homes are where the workers live, and disputes between these non-Navajo individuals and Navajo farm owners have ensued.

“We view this as an encroachment of our own farmland per the 2014 amendment of Title 3 of the Navajo Nation Code,” said Lynda Hayes, a resident, to the farm board. “It is expressed that one of the responsibilities of the farm board is to protect farm lands from encroachment of home site, burial site, church site, business site, advertisement site, real estate development, and urban development.

“Why the mobile homes” she asked, “with no home-site leases and no proper sewage and waste water containment are allowed to remain where they are?”

When it comes to uncertainty about the non-Navajo workers, Benally said this type of discrimination against the “guest” has to stop. But numerous reports of these guests bringing alcohol onto the reservation, claims that they are part of a drug cartel, the establishment of man camps, and even the possibility of human trafficking are becoming louder and louder.

“We need to use outside sources,” said Benally. “To support and help our farmers. We need to stop this discrimination. I’m hearing people are discriminating of our guest. This is 2020, discrimination needs to stop.”

After a few shouts back and forth and “points of order” between Benally and residents had stopped, another odd action took place. Benally put to a vote the removal of farm board member Tracey Raymond for missing meetings and undermining the board’s decision, which passed 3-2.

It was only a few days earlier that Raymond had written a letter of concern over the hemp farms and it had made its rounds on social media. In his letter he said he did some research of his own and found that hemp production is illegal without a license.

A Doodá Cannabis protest is planned for July 31 from 3 p.m. to 7 p.m. from the Salt Creek Wash to the Shiprock Chapter House.