Small businesses ‘sitting in the dark’ since pandemic 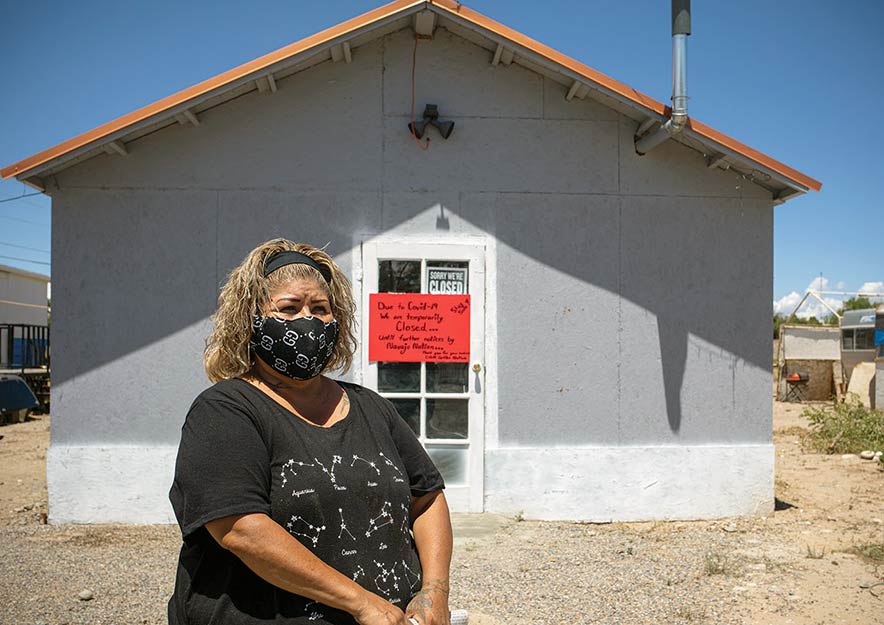 Navajo Times | Sharon Chischilly
Dianna Duwyenie stands in front of her closed restaurant in Shiprock. Navajo small business owners say they haven't had any income for months and need some guidance from the tribal government.

Every day, Dianna Duwyenie watches as long lines form at the drive-in windows of the Shiprock McDonald’s, Sonic and Taco Bell.

Meanwhile, the food stand she owns with her husband, DNM Grillen Native, has been shuttered since an executive order came down from the Navajo Nation Office of Environmental Health March 27. “We could be doing curbside (pickup),” she said. “I don’t understand the difference.”

She has tried calling the tribe to get some explanation and guidance, and ended up feeling like a basketball. “I called the president’s office, who referred me to Council,” she said. “Council told me to call the health department. The health department isn’t answering their phone. We’re just sitting in the dark.”

JT Willie, head of the Division of Economic Development, did not return two phone calls from the Times to ask where businesses should turn for information. It’s tough enough during normal times to run a business on the Navajo Nation. With no land ownership, it’s difficult to collateralize loans.

Then there are the miles of red tape business owners say has not improved much since the tribe took over processing business licenses from the BIA a few years back. But with the COVID-19 outbreak and the closure of non-essential businesses, it’s become nearly impossible, entrepreneurs say.

To complicate matters, they say they have received no guidance from the tribe, and small businesses are conspicuously left out of the discussions on the allocation of the Coronavirus Aid, Relief and Economic Recovery Services Act funds (although Al Henderson of the Dineh Chamber of Commerce assured business owners at the chamber’s last meeting Monday that there was a lot of work going on “behind the scenes” to include businesses in the relief effort).

Baya Meehan, who runs Shash Diné Eco-Retreat with her husband south of Page, Arizona, has watched with clenched teeth as the tourist season passed them by after they invested in a major upgrade. “No guidance whatsoever for small businesses,” she said. “Business stopped and it was a void. We still haven’t heard anything. Are we reopening? What are the guidelines? Not a damn word. It’s insane.”

Shawna Claw of Chinle added that even some essential businesses, such as emergency services contractors, haven’t received any encouragement during the pandemic. “Many Navajo EMT companies paid into NDOH (the Navajo Department of Health) and they were never issued permits to operate during the pandemic,” she said, adding “there is no discussion about the Navajo Nation waiving business taxes during the COVID-19 crisis.”

Trucker Glenmore Begaye pointed out that just because your business is closed doesn’t mean you have no expenses. He’s still paying insurance on his rig even though it’s parked; storefront businesses like Duwyenie’s still have to come up with rent and utilities.

Actually President Jonathan Nez did offer a plan to re-open the Nation during his recent state of the Navajo Nation address, but it wasn’t exactly what the businesspeople wanted to hear. Nez said the Nation will use the “Guidelines for opening up America again” issued by the White House and the Centers for Disease Control and Prevention.

These include a downward trajectory of COVID-19 cases for 14 straight days, a sustained decrease in the number of COVID-19 tests coming back positive, and capacity for all patients who need to be hospitalized. Of these, only the latter goal has been reached … and Nez warned this could change at any time since Arizona’s intensive care beds are 90 percent full and patients could be transferred into the Nation.

After these three goals are met, businesses will be allowed to open at 25 percent capacity, then 50 percent and 75 percent before resuming full operation. By then, warned Duwyenie, there won’t be many Navajo businesses left.

DNM qualified for the Pandemic Unemployment Assistance program, and will probably stay afloat, but Duwyenie said it went against every molecule in her body to apply. “I’ve never applied for welfare in my life,” she said. “Small business owners think of themselves as contributors to their communities. For us, a lot of our customers are elderlies who don’t cook and come to our restaurant every day for a hot meal. We buy our squash and corn locally and support local farmers.

“Now our customers are bringing us little gifts and saying, ‘When will you reopen?’ We have to tell them, ‘We have no idea.’” Germaine Simonson, who runs Turquoise Trail Transport out of Hard Rock, Arizona, said at the chamber meeting (held via conference call) her business was able to apply for the Payroll Protection Program with the help of Rural Community Assistance Corp., a nonprofit that helps small businesses.

But she said the woman who helped her confided that she is only able to assist about one out of 10 Navajo businesses that approach her because they are behind on their taxes and financial records, which are necessary to complete the application.

Contractor Jeff Begay added that the applications for a lot of government programs are online, which excludes people who don’t have good internet access. There is help available even for businesses that don’t quite have their affairs in order.

Karen Allen of the U.S. Small Business Administration told the 38 attendees on the chamber’s conference call their local Regional Business Development Office should be able to walk them through the process, and representatives of U.S. Rep Ben Ray Lujan’s offered that San Juan College in Farmington has a program to help small businesses with the paperwork. Alanna Purdy of Lujan’s office urged entrepreneurs to brave the application process and go after federal pandemic aid, noting that there are still millions of dollars set aside for businesses in the coffers.

Navajo Times | Sharon Chischilly
Dianna Duwyenie stands in front of her closed restaurant in Shiprock. Navajo small business owners say they haven’t had any income for months and need some guidance from the tribal government.

Simonson said she appreciated the federal support, but wished there was more communication from the tribal government — even just to offer some encouraging words. “I have not been contacted by any of the offices to say, ‘How are you? What’s it like out there?’” she said. “Just something like that would be nice.”