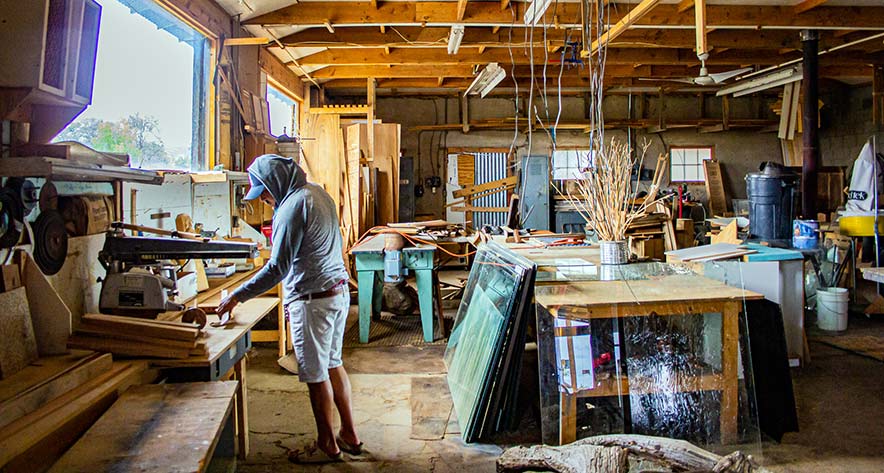 Navajo Times | Cyrus Norcross
This is the inside of Ira Vandever’s warehouse. Vandever aspires to process hemp made products in his warehouse and to provide jobs for the community.

Even though hemp is now legal in the United States, it is still banned on the Navajo Nation, putting the kibosh on what many consider a huge economic opportunity for individual growers and the Nation as a whole.

Diné hemp producer Ira Vandever is living proof that the Nation is not only missing out on economic development opportunities but is losing families to off-reservation lands who have been forced to find ways to make a living elsewhere due to Nation’s draconian cannabis laws.

“We use hemp for fiber,” said Vandever. “We don’t grow it to smoke it or even extract the oils.”

Vandever, a former health-care administrator, restaurateur and business strategist, decided to buy a large parcel of land in Cubero, New Mexico, east of his homelands in Baca/Prewitt, so that he could set up a hemp business, Turquoise Indigo Fibers, without getting into legal trouble on Navajo.

“I was thinking of how to bring all of my businesses together into one spot,” said Vandever. “I consolidated everything and purchased this to be our headquarters. It’s beautiful.”

Vandever also aims to establish a new market and a safe haven for Diné hemp growers who have been left to fend for themselves.

“Manufacturing needs to come back to the Navajo Nation, but right now we have to go off of it to achieve this type of self-sufficiency,” he said.

Last week, Vandever had a “soft opening” for a new storefront at 125 Cubero Loop, where weaving supplies, carding, and spinning tools are available along with a selection of home-grown foods.

“You can come in and buy the yarns, the honey products, the teas,” he said.

Vandever said people can stop by and share their ideas, learn about the products and services available and explore the property that has a rich history of drawing vanguards of innovation and progress.

“It reminds me of the 1920s boutiques,” said Vandever. “It’s like a place where you can go and feel free and your ideas can be taken seriously.”

Commonly misunderstood, hemp is a strain of cannabis with a trace Tetrahydrocannabinol (THC) content of .3 percent or less that is cultivated for fiber and seed production.

This threshold differentiates hemp from marijuana cannabis strains that contain more than .3 percent THC and are used for medicinal purposes and as a recreational drug.

Despite their differences, hemp looks and smells like marijuana, which contributes to the two cannabis strains being erroneously conflated.

To make matters even more confusing, last October the Navajo Nation Council passed a bill to amend the controlled substances section of Title 17 of the Navajo Nation Code and redefined all cannabis that has any THC in it, including hemp, as “marijuana.”

Marijuana is illegal on the Navajo Nation.

Therefore, hemp was criminalized, making it a punishable offense for anyone who possesses, manufactures, transports, sells, uses, trades or delivers it on the Nation.

Penalties can include up to $5,000 in fees and a year in prison, plus forfeiture of property, including leases and permits, and employment with the Navajo government.

“It’s like the craziest and scariest thing that I’ve ever heard,” said Vandever. “I thought there’s no way in the world that if you get caught growing hemp or processing it on the Navajo Nation that they would take your land, seize all of your property, but it’s there (in the law).”

“Ultimately, they can kick you off of the reservation,” he said.

Vandever asked several delegates who supported the bill if the Nation was really going to take land from people that’s been in the family for generations for growing hemp and no one responded.

The passage of the bill was largely viewed as a direct response to Dineh Benally’s 400-acre hemp enterprise that was not legitimately permitted, included marijuana plants, and led to a heated clash between Benally and the local Shiprock community that claimed the unregulated operation was putting its citizens in danger.

At the time, Navajo Nation Attorney General Doreen McPaul filed a lawsuit against Benally, charging his businesses with illegally growing industrial hemp and unlawfully issuing land use permits for that purpose.

On Sept. 18, 2020, a Navajo court issued a temporary restraining order requiring Benally to halt all operations on his farms and on Oct. 5 the bill was signed by President Jonathan Nez, making Benally’s hemp production illegal.

Many say the bill threw the baby out with the proverbial bath water by redefining hemp as marijuana and vilifying legitimate hemp growers, while sabotaging the potential of a hemp industry on Navajo.

“They recriminalized hemp and cannabis on the Navajo Nation,” said Vandever. “It was a direct reaction to one man’s actions.”

The only exception to the hemp ban on Navajo is a Hemp Pilot Research Project between the Navajo Agricultural Products Industry and New Mexico State University that was approved by Council to study the viability of hemp production as an economic opportunity.

However, Vandever says that everything around hemp has already been studied to the fullest extent.

“Hemp is the way to harness land and water resources to bring economic development, manufacturing, and the relationship with the land,” he said.

As it stands now, the only hope for those who wish to grow hemp on Navajo is a loophole in the code that conditionally creates a pathway for hemp production if the Navajo Nation government establishes a regulatory system for hemp.

That responsibility lies with the Navajo Division of Natural Resources but has not happened yet.

Under the umbrella of Vandever Trading Company, Vandever’s new enterprise, just off of Route 66 in Cubero, will also encompass several other ventures, programs and businesses in addition to hemp production.

These include a living history and heritage museum with an arts center and an open-air market that will host artisans, poets, inventors, educators, musicians, farmers, local food and produce vendors, conferences, and festivals; a fiber mill and woodworking workshop; walking trails and summer and winter camps, and more.

Vandever’s Turquoise Mountain Foods business will offer dry goods, bakery items, honey from Diné beekeepers, and fresh produce and meats, and Falling Clouds Catering and “The Loop on Old 66” Restaurant will be opening this fall.

Vandever, who formerly owned a successful restaurant in Ramah, said he’s been part of the food sovereignty and “farm to table” movement for over a decade.

“We’ve always been interested in growing our own food,” he said.

If that weren’t enough, Vandever is also offering business consulting, “incubating and accelerating” services through the Falling Cloud Resource Center to assist other entrepreneurs to grow their businesses too.

“Our resource center and consulting services will give individual inventors, makers, artists, and entrepreneurs the supportive network they need to grow and thrive,” he said.

“We specialize in helping individuals build their own enterprise from idea to incorporation and realization of profits that can support themselves and their families,” he said.

Vandever credits his grandparents Joe and Bessie Desiderio Vandever and his traditional upbringing for his visionary ideas and worldly view.

“My grandparents are the whole reason I do have enterprises,” he said. “My grandfather was really good at taking things that were already established and then making them better.”

Joe was a Navajo Code Talker and a medicine man and Bessie was an herbalist who raised her own cattle and sheep. They both took great pride in their Diné culture.

“My grandmother, who didn’t speak a lick of English, she was the one who could create something out of nothing – out of thin air!” he said. “She raised livestock, dyed wool and made rugs. She was self-sustaining before it was a buzzword.”

“There was never any hesitation about who we were or who we were going to be praying to,” he said.

After living their lives into old age, Joe and Bessie both passed on in 2020.

“It was because of their passing that I started to see that nobody’s really picking up where they left off in the medicine realm, the herbal realm and manufacturing of the wool,” said Vandever. “It’s a way of life. We just started jumping in and doing it.

Vandever says it is because of his grandmother’s legacy that he continues the tradition of raising livestock and working with wool and fabric.

“In our culture we learn about Spiderwoman and the deities and that these things are gifts,” he said. “There are herbs that need to be picked during certain seasons. There are ceremonies. Pretty soon you’re just being guided by our culture and our customs.”

Vandever and his partner Gabrielle Francis are also homeschooling their three young children and sharing the teachings of his grandparents with them.

Vandever has about 15 employees, including family members, who are “making things happen” for the new enterprise every day.

“Everyone is getting involved and it’s just growing and growing so fast,” he said.

His team can help those who are interested in setting up hemp farms (off Navajo), including seed and field preparation.

“We want to create a large workforce of people who are independent, local,” he said. “We can take you through the entire gamut – applications, licensing, prep work of fields, watering, planting, and harvesting.”

Hemp can be grown in three cycles annually, said Vandever, yielding a large crop, and can also be used for remediating contaminated soil because it absorbs toxins out of the ground.

“Hemp is an ideal choice for phytoremediation because it is fast growing, has deep roots and is unaffected by the toxins it accumulates from the soil and air,” he said.

Vandever’s ultimate goal is to create a regional standard for fiber production and resource management to create high quality, regionally branded Navajo merchandise that would add value to the Nation’s existing cottage fiber industry, including its mainstay, sheep wool.

The beauty of hemp is that it can be processed in the same way that wool is by washing, carding, spinning and dyeing.

At the fiber mill, they are making all of their own hand tools and spindles, and carders.

Vandever is already collaborating with traditional weavers to experiment with wool-hemp blends, which he says no one has ever done before.

He said the 50/50 churro and hemp blend works very well for Navajo rugs and saddle blankets.

“You get something very similar to the old days of the Navajo rugs in terms of durability and quality unmatched,” he said.

A 70/30 blend of churro and hemp yields a fine, cashmere like product, he said.

In early 2020, he worked with Diné master weaver Roy Kady and his grandson Tyrrell Tapaha who wove the first ever churro-hemp blend traditional Navajo rug.

“Roy is one of the first people who had the guts to take a chance and just do it,” said Vandever. “That’s huge.”