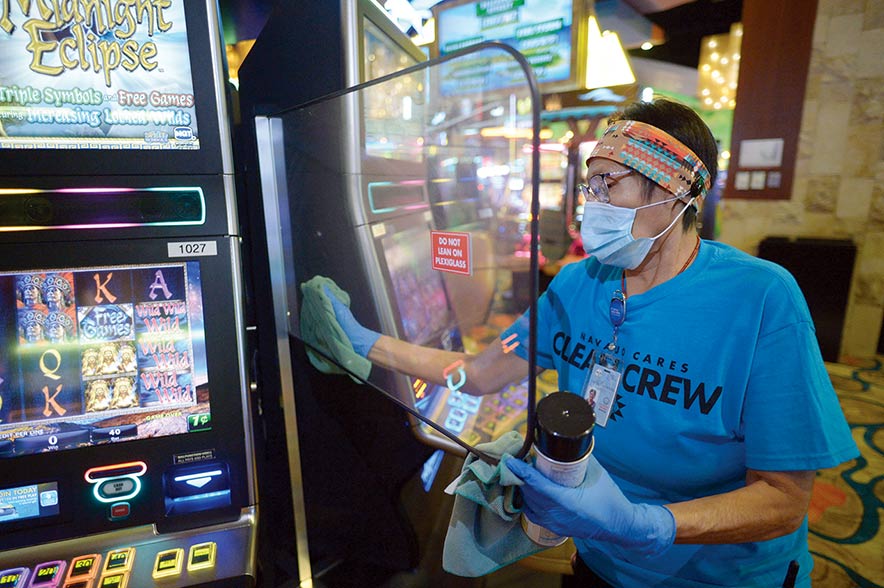 Elnora Youvella is glad to be back at work.

For more than 15 months, Twin Arrows Casino, where she is employed, has been shut down because of the coronavirus pandemic.

Youvella, who is part of the cleaning crew, said she has been out of work for a year and three months, during which she was on unemployment and worked in Flagstaff to stay afloat.

“I’ve been back at work since Saturday,” she said, while cleaning and disinfecting slot machines.

Barbara Otero from Winslow, Arizona, said she is also glad the casino has reopened.

Otero was busy playing her game on the Jungle Cat slot machine. She said she and her sister are regulars at the casino.

Bryce Warren, general manager for Twin Arrows Navajo Casino Resort, said a hundred people were in line to get into the casino when the doors opened at 9 a.m. on Monday.

Fire Rock and Northern Edge reopened on a limited basis on March 19, operating at 25% capacity. Flowing Water also opened on Monday, at the same as Twin Arrows.

Warren said two more job fairs will be held in Winslow in hopes of filling job openings. Warren said 40 positions were filled. Some people were hired, but they decided not to take the job.

“We seem to have a lot of luck out of Winslow,” Warren said.

“We lost about a third of our workforce, but what we’re seeing is some of them are coming back now because we’re open,” he said.

The Zenith restaurant and the buffet are closed, but Navajo Nation Gaming Enterprise CEO Brian Parrish is anticipating reopening next week.

Parrish said last Wednesday the forced closure caused by the coronavirus pandemic was “a long wait.”

The ban on non-residents of the Navajo Nation also is lifted.

The coronavirus was first reported in the Navajo Nation on March 17, 2020, when the tribe’s four casinos were closed.

“It’s been 15 months,” Parrish said. “We’re very excited about this opportunity to reconnect with all of our patrons. On Aug. 1, we’re going to have a grand reopening for all of our properties.”

Masks will be required while inside any of the casinos. Patron’s temperatures will be checked and a government-issued ID such as a driver’s license are required before gaining entry into the casinos.

Warren said the casinos have never asked patrons to show proof of vaccination but they would not say “no” if someone voluntarily did so.

“We have not requested that, but we would not never not say ‘no’ to that,” he said.

As of Tuesday, the Navajo Department of Health reported 31,067 positive cases. The number of deaths due to the virus is 1,357 for the Nation. A nightly curfew from 11 p.m. to 5 a.m. remains in effect until further notice.

Parrish said 80% of all casino employees had been vaccinated. Currently, NDOH is reporting 119,057 Navajo people have been fully vaccinated, and 247,521 doses were administered.

“We’re hoping the Navajo Nation leadership will extend the curfew or lift the curfew in the next week,” Parrish said. “We’re starting off with 50 percent capacity and we’re gonna stick with that until the Nation transitions from the yellow stage to the green stage.”