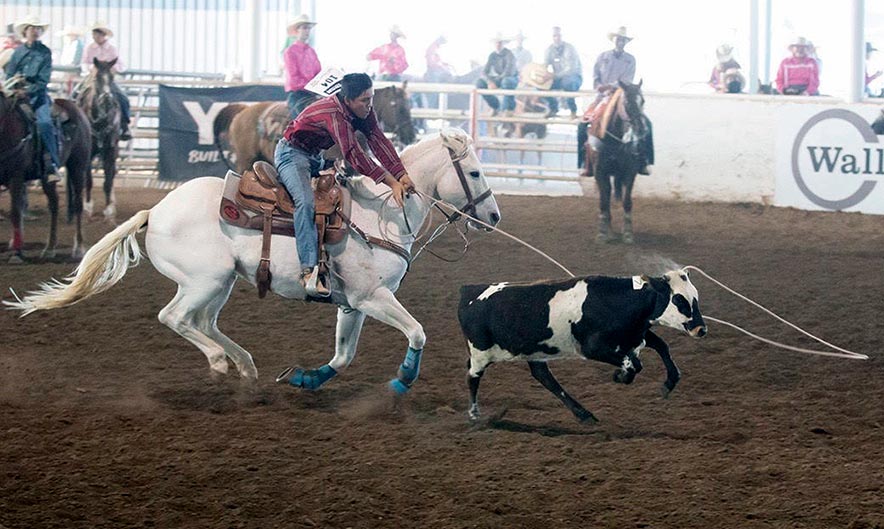 Special to the Times – Candace Begody
Troy Tenorio, of Chinle, attempts to rope his calf in the boys’ breakaway event over the weekend in Buckeye, Arizona. Tenorio finished as the reserve champion in the chute-dogging event.

It took a couple of rodeos for Troy Tenorio to adjust but the Many Farms cowboy is starting to settle in as an emerging chute-dogger.

On Sunday, Tenorio finished with a personal best of 8.77 seconds during the second day of the Buckeye rodeo in the Arizona Junior High School Rodeo Association.

“I got a better time on Sunday,” said Tenorio, who has family roots in the Dennehotso area. “I just wanted to go out there and see what happens.”

What he ended up doing was improving his chances at getting a berth to nationals as he earned 16 points at the two-day rodeo, which included a second-place finish on Sunday.

On Saturday, Tenorio added a 15.72 run for fifth place.

“I kind of messed up,” Tenorio said of his Saturday run. “When the steer came out he pushed me and I fell to the ground. I tried to get up but he pushed me one more time.”

With his two runs he finished as the reserve champion in the aggregate race with a time of 24.49 seconds.

Buckeye cowboy Chad Odom won the average with a time of 17.64 seconds although both cowboys came away with 16 points.

And while Odom won the average race, Tovarai feels that her son is gaining the confidence he needs for a top four finish in the year-end standings in order to qualify for nationals.

Troy is currently sitting in fifth place with 21 points with Odom leading the way with 34 points, ahead of Nolan Anderson (31), Kaden Lincoln (23) and Damian Padilla (23).

Tovarai said her 13-year-old son has been working with a family friend, Dale Etsitty, in recent weeks with his chute-dogging.

“Dale is the ag teacher at Many Farms and he was a part of the U of A rodeo team,” she said.

In addition to Etsitty’s help, Troy has a bevy of mentors from her side of the family.

“My son is a first-generation cowboy in my immediate family but we do have extended family members that do rodeo,” Tovarai said.

She said her older cousins Terry Jo Caboni and Wilbur Tuni have really influenced her son to pursue rodeo.

“A lot of what they did caught his eye at an early age,” she said. “Troy has been rodeoing since he was four, five years old and he’s got into a lot of other rodeo associations.”

As part of his heritage, Troy is also part San Felipe, Santo Domingo and Hopi with his dad, Richard, having grown up on the Santo Domingo Pueblo.

“My husband has told him that he’s the only cowboy in the village that actually rodeos,” Tovarai said.

She said Troy’s paternal side of the family is very supportive in what her son does.

“They give him a lot of encouragement,” she said, adding that his nálí grows alfalfa on the pueblo, 40 miles north of Albuquerque.

“We get hay from them now and then and they really supports him,” she said.

Besides chute-dogging, the Many Farms cowboy also competes in the breakaway, team-roping and goat-tying events.

“It’s become his passion because he does it all the time,” she said.

To help facilitate his desire to improve his roping, Tovarai said they sent Troy to a roping clinic hosted by Tuf Cooper, a four-time world champion in the PRCA ranks.

“He got some tips from him,” she said.

Coming from a large extended family that includes cousins that compete in the AJHSRA and the Arizona High School Rodeo Association, the family gets together on Sundays at their Dennehotso homestead.

“We always take the time to practice together,” Tovarai said. “We cover all the events so our kids can get enough practice.”

Troy concurred, while adding that he’s looking to be more consistent in his final year as a AJHSRA member.

“It takes a lot of practice,” he said. “One by one I want to try and get better in all of my events.”