A longtime stock contractor lost his battle with COVID-19.

Daniel Largo Sr. was admitted to the hospital on New Years Eve and he passed away on Sunday. Daniel was 64.

Graveside service for Daniel will be held on Tuesday, Feb. 9, at 10 a.m. at Sunset Memorial in Gallup. 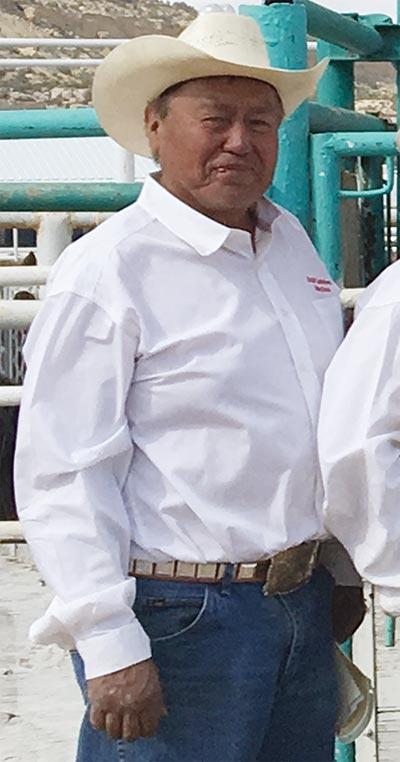 Danielle said her dad made a lot of friends over the years and many revered him, including some of rodeo greats such as Archie Becenti, JR Hunt, Jason Yazzie, Benson Kee, Henry Hildreth and Carleton Pioche.

“My father was a great man, who was really looked up to by others,” she said. “He was married to mother, Betty, for over 40 years and my mother stood behind his many adventures in the rodeo industry.”

“We’re really proud with what my mom and dad accomplished,” Devin chimed in. “They both worked hand-in-hand and what they created helped the rodeo world. We’re just so proud of the legacy that he’s leaving.”

The two siblings said their father was real proud of the long list of animals he produced with the D. Largo Rodeo Company, which he created in 1991.

As part of the family business plan, Devin said his dad sold some of his best horses to Casper Baca, Buster Webb and Cotton Ross.

“I used to ride saddle broncs and I would see some of the horses he raised bucking for these other stock contractors,” he said. “He was real proud of the program he had.”

In addition to bucking horses, Devin said his father also supplied stock for the roping events, which drew cowboys like Ed Holyan, Raymond Holyan and Wally Dennison to their homestead in Pinedale, New Mexico.

“There are so many cowboys that came here to our rodeo grounds,” he said. “He was a big provider for these cowboys that were coming up. There was so many of them.

“My mom and dad really catered to the cowboys,” he added. “They made sure they got what they needed with the cattle and bucking horses.”

And although his interest was mostly in the stock contracting business, Danielle said her dad also hosted a number of rodeos.

“In the early 1990s he started an open show rodeo here in Pinedale,” she said. “Sometimes, it was for one night or for four days. He also sanctioned rodeos with some of the local rodeo associations.”

“Over the years, my father won many awards from the different associations for the quality of stock he maintained,” she said.

And while he had a passion for raising quality stocks, Danielle said her father was very supportive in his kids’ endeavors.

“All of my siblings are service members,” she said. “We all served in the military in different branches.”

“He supported us while we were in the service,” Devin said, while noting that their dad temporarily stopped the rodeo business while his kids were deployed to Iraq.

“Traditionally, he stayed holy during those times so the rodeo took a pause for a couple of years,” he said.

Danielle said her dad was employed with the Gallup-McKinley County School District for over 20 years and he had recently retired to spend more time with his family.

She said her dad loved ranch work and part of his routine was to haul hay and water for their livestock in the mountains.

“He (had) hope to continue his teaching of raising livestock toward his grandchildren,” she said. “My father built our land from the ground up and he really showed us how hard work really does pay off.

The Largo family said they appreciate the outpouring of support as many have paid tribute to their late dad.

“We want to thank everyone for their prayers and their kind words,” Devin said. “We want to thank those cowboys who got to know him over the years. We’re hearing a lot of stories from them about the good old times.”

Devin said he hopes the people will remember his dad’s work in the rodeo business.

“My dad was real proud of the rodeos he produced and the cowboys he helped out,” he said. “He contributed a lot to the rodeo world and I think that’s going to be his legacy.”