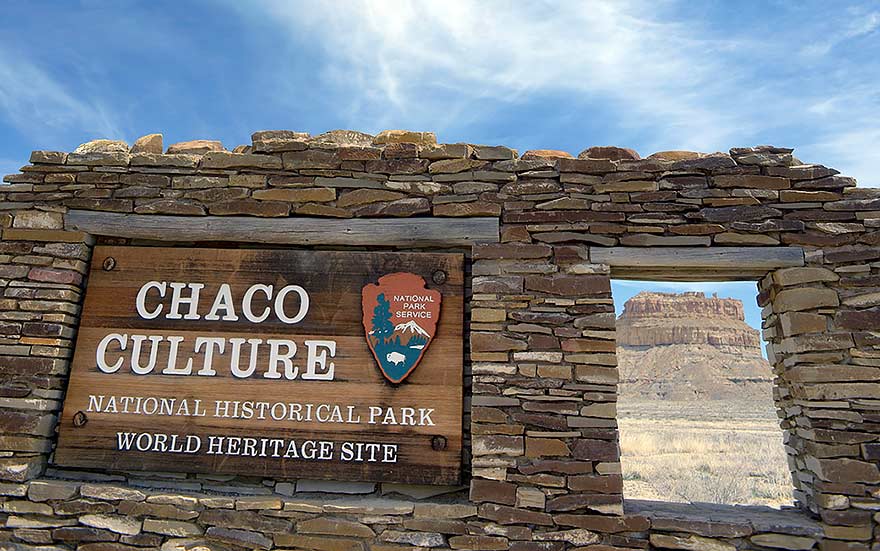 Navajo Times | Donovan Quintero
Clouds move across the sky and over the Chaco Canyon National Monument on Saturday, April 13, 2019.

As tribes are distracted by coronavirus humanitarian efforts, the federal government has proceeded with a plan for fracking and mineral leasing activities near Chaco Canyon.

Although Secretary of Interior David Bernhardt extended the public comment period from May 28 to Sept. 25 on the proposed plan to drill between 2,345 and 3,101 new oil and gas wells across the Greater Chaco area, it came after the U.S. Bureau of Land Management Farmington Field Office and Bureau of Indian Affairs held five virtual public meetings May 14 to 18.

Virtual meetings weren’t ideal for tribal members who would be directly impacted by the proposed plan, either because many are without internet/broadband connection, or like Diné C.A.R.E. vice president and Counselor Chapter Community Services Coordinator Samuel Sage, were busy with community obligations regarding COVID-19 and its impact.

“No, I didn’t listen to the virtual hearing,” wrote Sage to the Navajo Times in an email. “Because of time. Didn’t have it. Busy with chapter emergency operations.”

The plan analyzes resource management issues for lands in San Juan, Rio Arriba, McKinley, and Sandoval counties, including lands surrounding Chaco Culture National Historical Park. The Draft RMPA/EIS provides a unified document that resource managers can use for land use management purposes. This planning effort will update management decisions such as oil and gas development, lands and realty, lands with wilderness characteristics, and vegetation.

The document will facilitate the BLM and BIA environmental analysis and permitting of Indian and tribal mineral development. It encompasses approximately 4.2 million acres of land, including roughly 675,400 acres of Navajo trust surface, 1.3 million acres of BLM-managed land, and 210,100 acres of individual Indian allotments across 17 Navajo Nation chapters, according to BLM.

“When the local (chapter and Nation) leadership are distracted by the emergencies, it is business as usual for BLM,” said Sage. “Even when two Secretary of Interior issued moratorium putting a hold on extraction they were still approving leases in the Chaco region.”

The Navajo Nation is an island on its own as all three states that surround it are beginning to open up to business, even with the threat of COVID-19 still looming.

As of Tuesday night there were 5,533 COVID-19 cases, 252 deaths, and 1,960 recoveries on the Nation, and although there has been some talk of opening the Navajo Nation government, it’s still in the talking stage.

The Navajo Nation is not the only tribe that has historical and cultural ties to Chaco Canyon, as well as being preoccupied with battling the pandemic. Pueblo tribes consider Chaco Canyon as their ancestral home, but have also been working toward fighting COVID-19, which has disproportionally careened onto Native lands.

In April 2019, New Mexico’s congressional delegation visited Chaco Canyon along with Navajo leaders and lawmakers to discuss a bill to withdraw the federal lands around Chaco Canyon from further mineral development by creating a 10-mile buffer zone around the Ancestral Puebloan ruins preserved in the park. Along with this group was Acoma Pueblo Gov. Brian D. Vallo.

“The COVID-19 derailed things for us,” said Vallo to the Times.
“We were getting to a point where the Navajo Nation and Pueblo tribes were working with these agencies to formulate (a plan) under the federal policies that exist that govern this process of consultation,” said Vallo.

But leave it to a pandemic to unravel all the work done between tribes and federal agencies.
As of May 27, Acoma Pueblo had 16 people who were COVID-19 positive with a population of less than 5,000 according to the 2010 census.

In March, Vallo issued a public health emergency declaration, and in April he sent out executive orders consisting of stay-at-home orders, closure of the Pueblo to all non-residents, tribal curfew and limiting of public gatherings, all of which are still in effect.

“The federal government has moved forward with the process even while tribes have made it clear we don’t have the resources in place, and that’s the people resources,” said Vallo. “Because of our tribal offices closures, and full concentration of COVID-19, this is not the best time to be directly engaged.”

When BLM and other agencies decided to move forward with the public comment period and virtual meetings, Vallo said they were taken aback and had requested to pause any public comment period because the tribe hadn’t reviewed thoroughly the draft RMPA, nor did they have the opportunity to regroup with other tribes and agencies to discuss a process that would be appropriate in light of COVID-19.

The All Pueblo Governors association was able to meet with Bernhardt recently and make a direct request to extend the public comment period, which eventually did happen.

But even with the series of events suggesting federal agencies had used the COVID-19 pandemic to their advantage to minimize tribes’ involvement and concerns over the proposed plan, Vallo said he hopes that wasn’t the case.

“That would be a detriment if that were the case,” said Vallo. “I certainty hope not.”
The Farmington office of the BLM did not return multiple phone calls Wednesday.

Congressman Ben Ray Luján and the New Mexico delegation called on Secretary Bernhardt in March to extend the public comment period by 120 days to keep communities safe during the COVID-19 pandemic.

Extending the public comment period during the pandemic “is critical toward ensuring that the voices of tribal leaders, conservation advocates, and New Mexicans are heard in the fight to protect the greater Chaco Canyon region,” stated Lujan.
Public comments can be made at: federalregister.gov/…/notice-of-availability-of-the-farming…