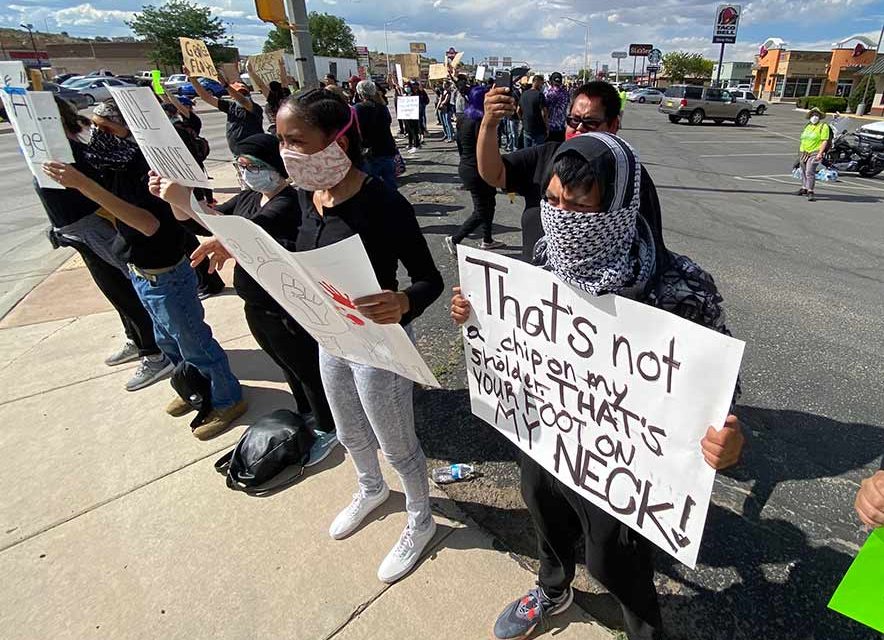 Navajo Times | Donovan Quintero
Citizens rally to remember George Floyd on the corner of U.S. Highway 491 and Metro Avenue on Wednesday in Gallup.

The high desert sun was scorching but that didn’t stop some 150 protesters from Gallup and surrounding areas from coming together last Wednesday to chant “Black lives matter!” And it also didn’t stop an armed group of civilians from turning out under the guise of protecting downtown businesses.

The words “Black lives matter” have been heard around the world, and now in Gallup, New Mexico, since the murder of George Floyd on May 25 by four Minneapolis police officers who have all been charged and detained. This was Jordan Ortega’s first time attending a protest.

“Since this whole incident with George Floyd happened, I’ve been very silent and passive,” said Ortega, 22. “I thought it was none of my business. It’s not my fight and I kept thinking if I don’t fight now, no one is going to fight now.”

Her final push was thinking to herself, if George Floyd came to her and asked her to stand with him, to stand for him, what would she say? “I’d be, like, ‘Yes, I’m going to go out there. I’ll protest with the people and I’ll try to make this change happen,’” Ortega said.

So she painted her mask with a Black power fist and the words “Black Lives Matter.” Then she stood alongside U.S. Highway 491 chanting, “No justice. No peace.” The Black Lives Matter movement was created in 2013 after the acquittal of Trayvon Martin’s murderer. 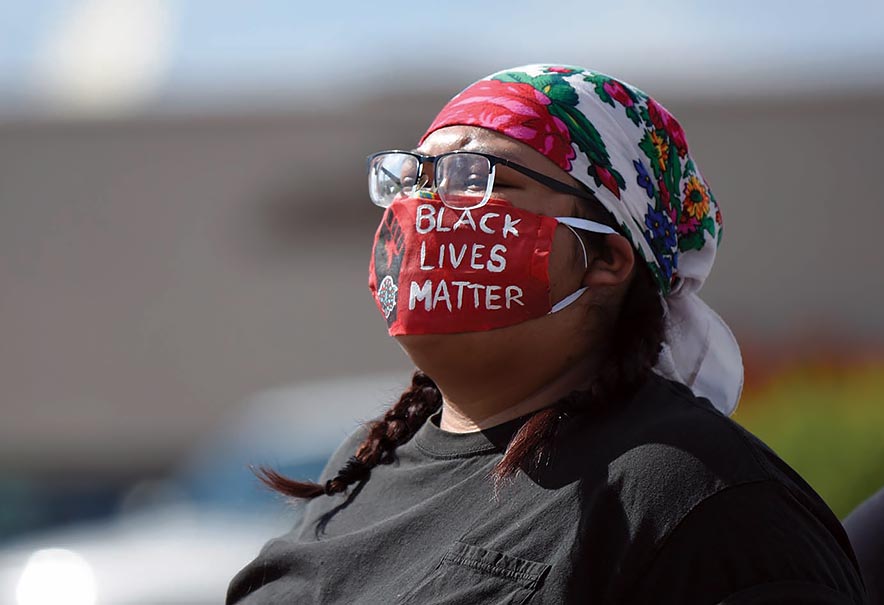 Navajo Times | Ravonelle Yazzie
Jordan Ortega, 22, participates during a Black Lives Matter protest on Wednesday afternoon that started on the north side of Gallup and ended in downtown Gallup.

The mission, according to their website, is to “eradicate white supremacy and build local power to intervene in violence inflicted on Black communities by the state and vigilantes.” The Black Lives Matter protests are not just about George Floyd but all Black folks who lost their lives to police brutality and state-sanctioned violence.

Hovering closeby during the protest were dozens of police officers and their units. All were wearing tactical gear. A caravan of police units stopped traffic for the marchers and followed them from the north side of Gallup to the courthouse where even more police were waiting.

Downtown Gallup was a sea of protesters, police officers and what appeared to be members of a militia. Militia means a “military force that is raised from the civil population.”

James Eby, the director of the Gallup Cultural Center and project director for the Southwest Indian Foundation, founded a group called True Patriot Foundation, which he described as “a veterans’ service nonprofit.”

Members of the group were seen patrolling businesses with guns during the march last week. Those who were a part of his group, that he referred to as volunteers, carried “firearms – handguns to recreational spring rifles and hunting rifles and shotguns,” he said in a phone interview.

Eby said he sees firearms as “a tool.” According to Eby, the group was prepared to fire their guns at people only if “absolutely necessary.” He added that the guns would be used “only in the instance of protecting a life.”

A photo on social media showed people with guns and wearing tactical gear on the roofs of local businesses. “In an attempt to not only make protestors feel more welcome but also to ease the possibility of being called antagonistic, I instructed all volunteers who came to protect the businesses downtown to retreat into the business if protestors were within view,” Eby stated in an email. “All volunteers complied with this instruction and there was no interaction with the protestors and protectors as a whole.”

Businesses downtown had heard about the protest and decided to board up windows to deter property damage and looting that was seen at protests in other cities. Gallup businesses invited Eby and his group, he said, but he declined to name the people in his group or the local businesses that invited him.

Despite a heavy police presence and civilians with guns, Ortega and other protesters said they marched for change. “I know this is a hard topic to talk about, but we got to do it if we want change,” she said. “I had to get off my butt and go out there and make a difference if I want this world to be any better.”

She saw online the photos and videos of Floyd’s murder. The images stuck with her. “My heart broke literally when I saw it,” Ortega said. “I thought it was unnecessary; he was already incapacitated. He already had his hands behind his back, and it was just unnecessary.” 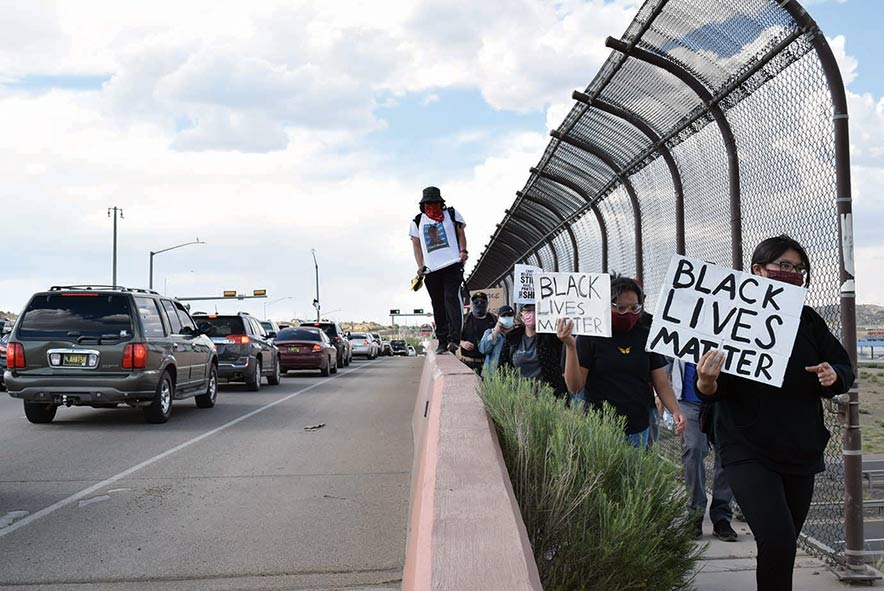 Navajo Times | Ravonelle Yazzie
People participating in the Black Lives Matter protest walk across the bridge on U.S. Highway 491 in Gallup on Wednesday.

Now there is a lingering fear for Ortega because a man died and “no one blinked an eye.” “It scared me to my core,” Ortega said. The police officer, Derek Chauvin, accused of murdering George Floyd, kneeled on his neck for eight minutes and 46 seconds.

Two autopsy reports concluded it was a homicide but don’t agree on the cause of death. One report stated death was caused by cardiopulmonary arrest – sudden loss of blood flow due to heart failure.

The other three officers — Tou Thao, J. Alexander Kueng and Thomas Lane — who stood by as Floyd was murdered, are charged with aiding and abetting in the murder. All three were arrested on June 3. The charges against the officers were filed only after 150 cities across the United States saw an uprising and protests that demanded justice.

With Ortega was her little brother, Joaquin Ortega, 17. “What I saw on my social media wasn’t right,” he said. Joaquin wanted to be a part of a movement that was bigger than him.

This was also the first protest he’s ever attended. He was there to “see if I can make an impact,” he said. “See if we can change the world.” The Ortega siblings wanted to stand in solidarity with the Black community. “We’re here for you,” Joaquin said. “We stand behind you. We stand with you and we’ll fight for you.”

Another young protester was 15-year-old Tyanna Begay. “Black lives do matter and everyone should take a stand,” Begay said. “If we don’t take a stand now the world will never change.” The video of Floyd’s murder went viral on social media and Begay, like others around the world, was a witness to what happened. “I was dripping in tears,” Begay said. “This is not the only time it has happened to an African American. It’s been happening.”

Begay made signs for herself and her family, including her eight-year-old niece Nikki Begay, who marched with everyone else to the courthouse. “We’ve been talking about the protests a lot to her,” Nikki’s mother (name unavailable) said. “She understands what’s going on … She wanted to take a stand and walk with us.”

Nikki’s mother is proud of the younger people who are stepping up to have their voices heard. “It just shows that future generations are rising up and that there’s a newborn era that’s going to take over one day,” she said. “They fully know the value of life.”