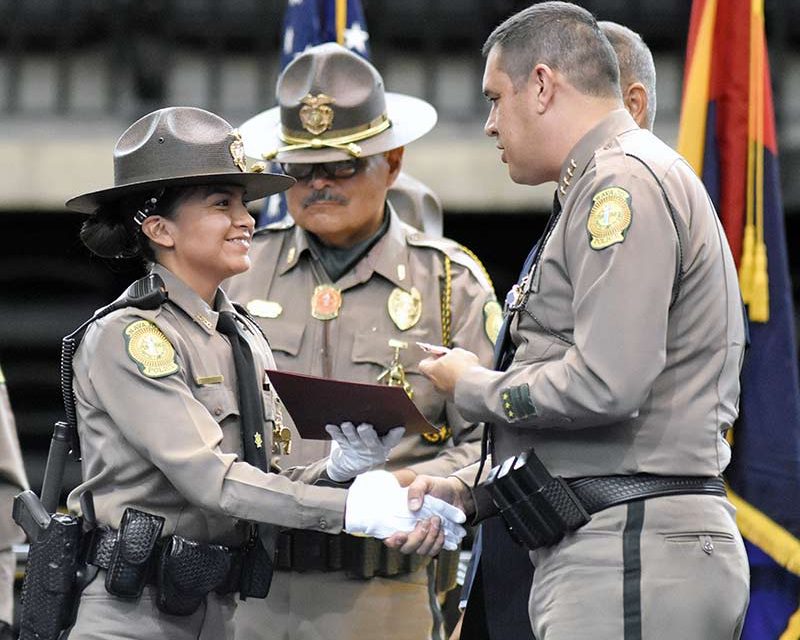 The Navajo Nation Police Academy is projected to begin June 15, and Police Chief Phillip Francisco assures that it’s a go.

Before the pandemic hit the Nation hard in March, the police department was set to start its new academy class that month, but as the numbers of positive cases increased drastically, and the Navajo Department of Health put public safety orders in place — which for the most part would need officers to carry them out — the academy was put on hold.

It was actually the pandemic and the shortage of officers that made Francisco realize holding off on the academy wasn’t the best approach. The Nation’s need for more public safety is a call that has been echoed not just by Navajo politicians, but by the Navajo people as well.

“When this COVID pandemic hit we were inundated with how we are going to deal with this,” said Francisco. “Trying to adapt to it, there were a lot of policy changes, a lot of things to figure out just to operate normally.”

Police officers are not immune to the coronavirus. There are about 10 police staff who are COVID-19 positive, and three officers who were taken to the ICU are stable and are recovering, but won’t be back to work for a while.

But because officers and staff had fallen ill, and because the Chinle area — where the academy is located — had taken a big hit of COVID-19 cases, Francisco had to pull academy staff to supplement and take over the department’s regular duties in the community. But thankfully, no new COVID-19 cases have been reported among staff and officers.

“This is something I’ve wanted to do since I was a kid,” said police recruit Klyton Belone, 21, on why he chose to go into law enforcement.

When it comes to being a recruit at this pivotal point in time, Belone said “It’s interesting” and “it’s all about adjusting.”

Coming up on his fourth year as police chief, Francisco has made good on his vision to resurrect the police academy.

Although this past year has been a dicey one not just because of the pandemic, but also dealing with lawmakers, he continued to prioritize the safety and well-being of his officers in order to ensure the Navajo public had a police force they could rely on.

So far there are over 20 officers that have over 25 years of service. This upcoming class will have about 25 recruits, and once it is done the Navajo police force will be made up of 50% new officers. So far, half of the street officers that are out there now have fewer than five years of experience.

“We’re beginning to be a newer department,” said Francisco. “The … older generation officers who were taught in a different type of academy and different kind of leadership are retiring, Now we have a new generation of officers that are taught under my administration. They are a different breed. They’re on the forefront.”

What does the new breed of policing look like when police officers are being scrutinized even more following the May 25 killing of George Floyd?

“All the officers are disgusted of what happened in the video and we don’t condone that action.” said Francisco during a May 3 town hall.

He said what it comes down to is being vigilant in making sure officers are doing the right thing at all times when it comes to both protecting people’s rights and their safety.

“We are re-emphasizing how we conduct ourselves,” said Francisco. “We’ve secured body cameras for my officers, making sure they’re using it 100% of the time, and keeping an eye on what they’re doing. We have recorded documentation so if we see any complaints of excessive force or violation of peoples rights, we will take disciplinary action on that.”

While the pandemic has stretched Navajo Police manpower a bit thin by having to enforce public health orders, maintain response to emergency calls, and cover the shifts of the ill officers, this has led a few Council delegates to harp on getting cross-commissioned officers from outside departments to pick up the slack.

This does not sit well with Francisco.

“We would like to maintain our own police force and serve our own people to the best of our ability,” said Francisco. “Bringing in outside agencies puts us more at risk of something tragic happening. We are trying to use those cross-commissioning agreements to only provide backup for our officers, and not have them come onto the reservation.”

Like all schools, the academy will have to adapt to the new normal of COVID-19. Rather than 26 weeks it will be cut to 16 weeks because recruits will not be allowed to leave the campus in an attempt to prevent them from being exposed to the virus.

Recruits will also be tested for COVID19 beforehand, and many other changes will be made from the flow of the academy to instruction.

Division of Public Safety and the Navajo Police Department’s need for more funding to operate isn’t a new problem, but the lack of fiduciary support won’t stop Francisco from holding the academy.

Then there is $1 million allocated for personal protection equipment and supplies to sanitize offices. But these dollars have yet to be seen.

“We will be operating the academy on a shoestring budget due to depleted general funds due to expenditures from COVID-19 pandemic response,” said Francisco.