Teller, while struggling to breathe, said on Wednesday morning he was admitted for COVID-19 and showed signs of pneumonia, abnormal readings of his liver, and low oxygen levels. 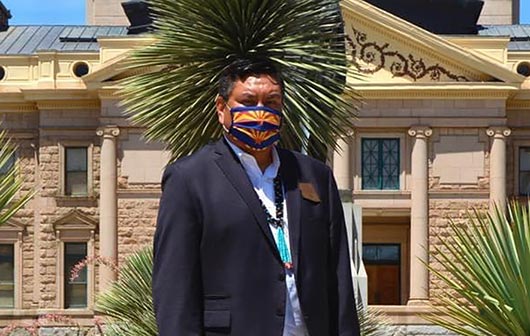 He added he was given Remdesivir and steroids to help him fight the virus.

He isn’t sure where, when or how he caught the highly contagious respiratory disease, but after returning from public service duties in Phoenix from Nov. 4 to 16, he noticed a runny nose on Nov. 17.

“Then that evening, I had a really nasty fever that lasted all night long,” he said. “The next morning I told my folks, ‘I know there is something wrong with me. I’m gonna go in.’”

Teller drove to the Chinle IHS and took a test.

“I went into the hospital on Wednesday to get checked,” he said. “My test came back positive.”

The re-elected Arizona state representative said, after the test, he began to experience “the most extreme pains” he’s ever felt.

“The first four days were absolutely excruciating,” he said. “Just intense headaches. Very excruciating pain. Body aches and fever were really bad. I can’t describe to you how painful they were.”

While in Phoenix, Teller recalled touching items at a convenience store and a gas pump, and forgetting to sanitize his hands. He suspected that was where he may have contracted the virus.

Besides the two times he forgot to use hand sanitizer, he said he has been diligent about wearing a mask, washing his hands frequently, socially distancing from everyone, and using hand sanitizer.

“I was pretty diligent, conscientious, vigilant,” he said. “I had my mask on. I sprayed my hand with 90 percent alcohol that I leave in my car. I sprayed down my office with alcohol. I’m pretty conscientious of the safety issues.”

Since being elected to represent District 7 in 2018, which is basically the northern half of the state, Teller ran for re-election and defeated Republican challenger Jim Parks by a substantial margin.

After defeating Parks, it was back to work, he said.

During the pandemic, Teller said he conducted business via virtual meetings. But often, he said, many organizations requested to meet him in person.

“I make these meetings,” he said. “All I saw were 10 people. They all tested negative. I was the only that got it.”

He said a doctor told him that between eight and 10 days after contracting the virus were “highly dangerous” times.

“I’m in the day eight, 10. It is during this time they’re (patients with COVID) struggling with their oxygen. That’s what happening to me right now,” Teller said.

Teller would pause for long moments to catch his breath and continue speaking. He said the virus was “no joke.”

“It’s very contagious,” he said. “I feel bad because I keep telling my family and friends, ‘Wear your gloves, wear your mask, six feet, social distance. Don’t go places just to go places.’ And here I am.

“It’s imperative to follow our leaders advisement to stay home, to wear a mask, sanitize, wash your hands all the time.”