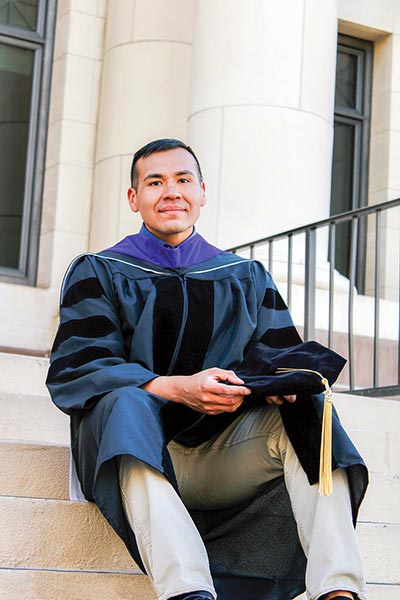 Brad’s family is grateful for the guidance and support from the Eastern Band of Cherokee Indians Scholarship Office.

Brad is also the recipient of the Robert and Amy Barker BYU Law School endowment and the Myron W. Ogden Scholarship.

Brad has been serving in the Army Reserves and will begin deployment in May 2022.

Brad is the grandson of the late Leonard and Louise Sandman of Sheep Springs, New Mexico, late grandmother Sharon Easley of Bend, Oregon, and Harry Talk Jr. and the late Barbara Talk of Sanostee, New Mexico.

Brad’s parents are Roy A. Talk and LaVay S. Talk of Provo, Utah.

Approximately half of Arizona households currently meet this financial threshold.

NAU will continue to provide generous financial aid packages for students living in households with incomes above $65,000.

The changes take effect in fall 2023 for first-year and transfer students who attend NAU in Flagstaff or at one of Arizona’s universities.

NAU President José Luis Cruz Rivera said, “Affordability of college is top of mind for many, and this program ensures that tuition is not a barrier.”

MESA, Ariz. – The United National Indian Tribal Youth group has announced its fifth class of the “25 Under 25 Native Youth Leaders.”

Mary Kim Titla, UNITY executive director, said, “Our Native youth have a passion for building and bettering their communities. UNITY’s 25 Under 25 program recognizes their achievements and encourages these young people to stay involved and further develop their leadership skills.”

Among the list of 25 are Diné leaders Ajah-Rain Yellowhair, 17, from New Mexico; Ally Gee, 22, from Colorado; and Candice Joe, 19, from Arizona.

NPC will award 601 degrees and certificates to 424 students.

The commencement speaker is Luci Tapahonso, the inaugural poet laureate for the Navajo Nation and professor emerita of English literature at the University of New Mexico.

This is the first time the event will be held in the stadium, and NPC encourages families, friends, and the public to celebrate the 2022 graduates.

Five outstanding graduates will address their peers during the ceremony. The graduates are Lauren Stidham, who lives in Mesa; Horacio Luna of Holbrook; Addison Burson, a former resident of Lakeside who currently lives in Casa Grande; Erica Novak of St. Johns; and Desiree Montejano of Snowflake.

Field seating is restricted to individuals with reserved tickets, and open seating will be available in the stadium’s bleachers.

The ceremony will be streamed live on YouTube (www.npc.edu/2022grads).

SJC gradation set for May 14

FARMINGTON – San Juan College will hold graduation ceremonies for its students, as well as those from New Mexico Highlands University’s Farmington Center and the University of New Mexico’s San Juan Center, beginning at 9 a.m. on Saturday, May 14, in the Learning Commons Plaza.

A live web stream will be available at sanjuancollege.edu or through the San Juan College YouTube channel.

The graduate selected by the Graduation Committee to represent the class and speak at this year’s ceremonies is Briana Logsdon, who will receive an associate from the physical therapist assistant program.

Laura Ann Crawford, who worked as the Northwest Region director for Presbyterian Medical Services, will give the guest keynote address.

More than 1,325 graduates are earning associates and certificates, and more than 115 are earning bachelor’s and master’s degrees from Highlands and UNM.

Following graduation ceremonies, a reception will be held on the west lawn of the Henderson Fine Arts Center.