‘Everyone comes here with a backstory’ 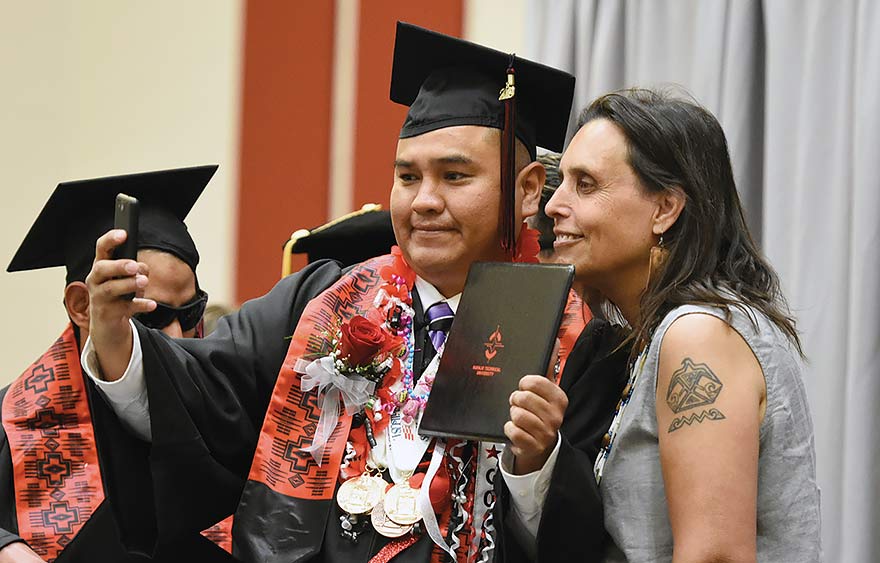 Kyleigh Largo clasped tightly to her dad, Corwin Largo, who had just received his bachelor’s in industrial engineering with a minor in mathematics from Navajo Technical University.

“I really wanted my daughter to say that, ‘My dad is an engineer,’ said Largo. “That was my motivation to finish this degree. It was a challenge. I just want her to live comfortably. I want to take care of her and hope she follows in my footsteps.”

Largo received his degree on Friday, along with 23 others who received their undergraduate degrees, 84 who received certificates, 71 who received associates and 27 GED recipients.

Candid about how a tribal college wasn’t his first choice, Largo said that changed when he actually got on campus and began taking the classes.

“When you start applying for colleges you don’t think of coming to a tribal college until you are on campus,” said Largo. “Everyone comes here with a backstory. I’m glad I came here and finished here.”

She told the audience that she “owes a lot of debt” to the Navajo people, because while a student studying energy economics at Harvard University, she spent a lot of time researching uranium and coal strip mining on Navajo.

“I spent a lot of time here with people who changed my life,” said LaDuke. “I came here as a young woman and it taught me a lot. I saw the massive amount of exploitation, which occurred in our territories. From my experience here I learned more the value of water than I’ve learned anywhere else. Learned the value of what is right.”

Natives taking back their knowledge and education, LaDuke said, was a prophecy that was expressed.

The prophet she refers to came from the White Earth Reservation in Minnesota, where she is from, and foresaw the arrival of white people, the disappearance of Natives as well as their “things,” and the establishment of residential schools.

“They talked about these people who would be born,” said LaDuke. “These new people would find the things that was taken. They would go and reclaim things … in that we would remember who we are. I think that is the age of tribal colleges. When we, as Native people, take back the control of our education and knowledge systems.”

Graduating with her industrial engineering degree, Adriane Tenequer said NTU was close to home and it offered her numerous opportunities to work for various industries. She had worked with the Boeing Company, and now that she has graduated she will be heading to Alabama to work with Jacobs Technology at Marshall Space Center.

As a mother of two, she said her schedule revolves around her children, so with the help of her family and the close proximity of NTU, she was able to pursue her engineering passion.

“Engineering is something I’ve always wanted to do,” said Tenequer. “At one point I want to have my own business here so I can fulfill employment in this area. I’ve had a lot of opportunities through NTU.”

NTU President Elmer Guy spoke on the school’s 40-year evolution, from the Navajo Skills Center to Crownpoint Institute of Technology to Navajo Technical College and then Navajo Technical University.

He boasted that the university was ranked by bestcolleges.com the No. 3 college in New Mexico, outranking the University of New Mexico.

In its 40th year, Guy was proud to announce the school would be presenting its first honorary doctorate degree to New Mexico State Sen. John Pinto.

Pinto, 94, was a Navajo Code Talker and has served in the senate for the 3rd District since 1977.

“As a senator and a code talker he has always pushed Navajo Technical University for funding,” said Guy. “We are honoring that past that has made the university what it is today. In that context, we are honoring Senator Pinto with a honorary doctorate.”

Guy told the graduates saying that he hopes they continue with their education. An inspirational example of this message was AIHEC’s student of the year, Darrick D. Lee, who received his bachelor’s in electrical engineering.

In an emotional message to his fellow graduates, Lee, from Shiprock, said he slept in his truck and camped out at a friend’s house in order to commute to school.

“Whether you plan to go straight to work right after you graduate or continuing your education, just know it’s going to take a lot of hard work,” said Lee. “Everyone has a right to be here to get an education. You are privileged to be here. You are now responsible to use what you learned from here.”