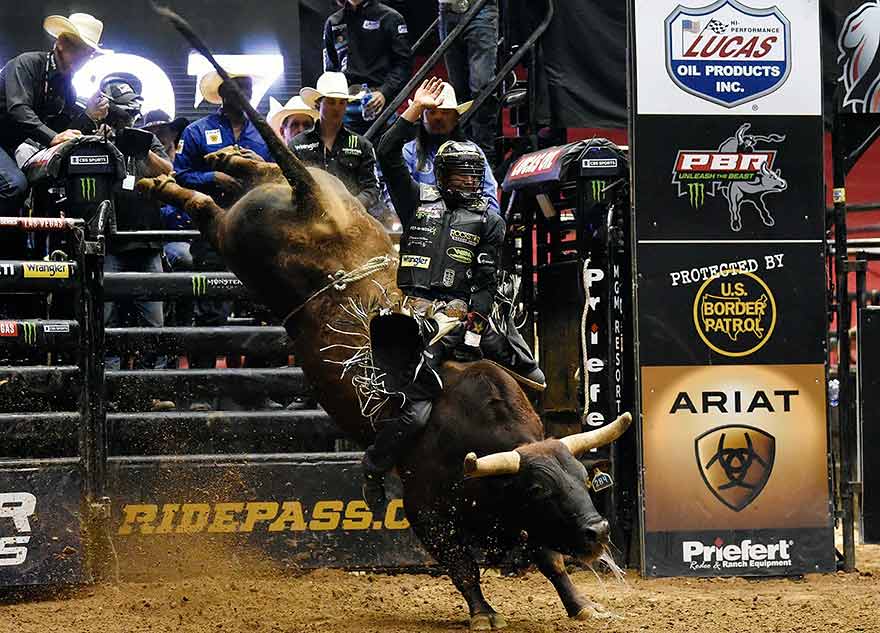 Navajo Times | Ravonelle Yazzie
Cody Jesus attempts to make an 8-second ride at the Ty Murray Invitational on Friday night at the Dreamstyle Arena in Albuquerque. Jesus rode 1-of-4 bulls during the three-day event.

A nagging groin injury may have sidelined Cody Jesus but that didn’t stop him from reentering the PBR’s Unleash the Beast tour last weekend at the Ty Murray Invitational.

The Diné bull rider suspended his vocation for six weeks after straining his left groin during the Tacoma Invitational in late March. Jesus did everything and anything to get back on the tour as he covered 1-of-4 bulls during the three-day event held at the famed Pit.

“I started going to a physical therapist in Gallup and I started acupuncture,” the PBR’s No. 11 ranked bull rider said. “I did that so that I could be ready for the Ty Murray Invitational.”

It was at this event that Jesus got his start two years ago in the PBR ranks. He remembered fondly how things didn’t quite work out in his first try.

“It was pretty much a blur for me,” the Sawmill, Arizona, bull rider said. “I was overwhelmed and I couldn’t think straight, couldn’t focus and everything just got to my head.”

Of the three bulls he attempted, Jesus said all those rides didn’t combine for eight seconds, which he describes as a humbling experience.

“After it was done I was, like, ‘Do I have the talent to be here to get on these ranked bulls?’” Jesus said. “I thought to myself that God had a plan for me and at that time I wasn’t mature enough to be at this level.”

Interestingly enough, Jesus said he caught a glimpse of himself with 2018 Indian National Finals Rodeo world bull-riding champion Latrell Long, who earned an invitation to this year’s Ty Murray event.