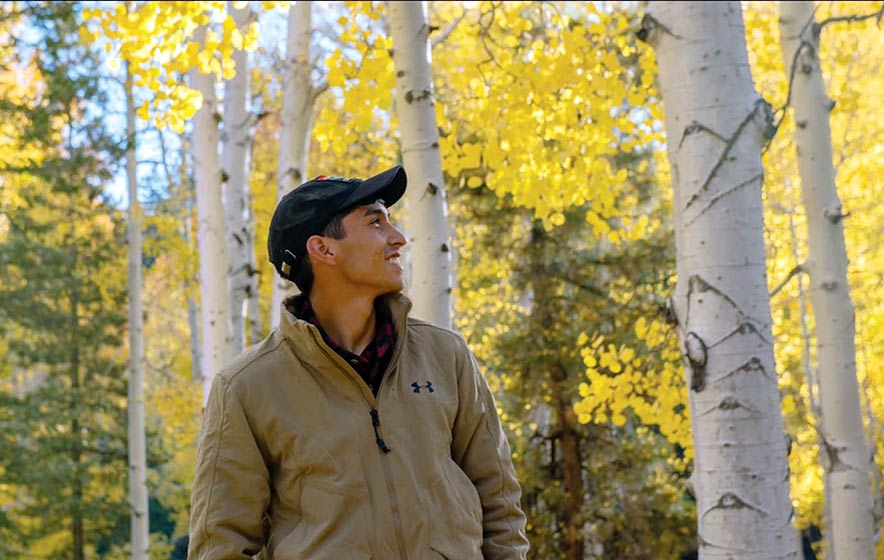 By Stacy Thacker
Special to the Times

His first year at Pennsylvania State University was hard. There were no Native American student groups or organizations to join. He was fresh off the Navajo Nation and looking for student connections.

Timothy Benally, a senior at Penn State, was used to having family around and being surrounded by a community who would drive eight hours to watch a basketball game. Now he was alone and homesick.
“There were pretty much no resources to support Native Americans or their identity,” he said. “I remember my first year, I really struggled with that.”
Benally didn’t know where he fit.

“I felt total imposter syndrome in thinking I didn’t belong there, I wasn’t smart enough to be there,” he said.

Benally, Diné, graduated at the top of his class at Ganado High but he still felt that he didn’t belong at Penn State and he wished for the support of other Native American students who understood what he was going through.

But in order to find Native American groups and conferences, Benally had to travel about six to seven hours to Harvard University to feel a sense of community. He decided to change that and began working to create a community at Penn State.

“The process was long but I had to start building a support group for other Native American students,” Benally said.

He did this by joining the Multicultural Resource Center Leadership Council and worked with the admissions office. He slowly built connections across campus.

In 2019, Benally said two Navajos joined the Penn State faculty and he felt that his goal of a student group was getting closer and closer. The two Diné are Tracy Peterson, director of student transitions and precollege programs in the College of Engineering at Penn State, and Hollie Kulago, an associate professor of education.

“With their help and their knowledge of higher education, they helped boost a lot of the initiatives that I had started,” he said. “We were able to start the Indigenous People’s Student Association.”

In January 2019, they had their official organization and a voice on campus. They found a small Native American student population who was also missing their communities.

With about 20 Penn State campuses across the state, many students were traveling from as far as three hours away to have potlucks and to mingle.

“There is this Western concept of sense of belonging,” Peterson said. “In Diné culture that concept is K’é. Family is really important and that’s where you get your support from.

“It’s not any different when you go to college,” she said. “If you’re Diné, you’re going to be looking for that K’é.”

Peterson said when students find their sense of belonging then they begin to really thrive.

“At a big university like this, Native students go under the radar,” Peterson said, so it’s important to identify them and offer them services.

The student association along with new initiatives on campus is a collaborative effort among students, Peterson said. Native American students, non-Native student allies and university faculty and staff are all working together to make sure efforts are successful.

“Our driving force is our students. We want to make sure that their voices are heard and that we’re advocates,” Peterson said.

The Indigenous People’s Student Association is working on different initiatives throughout the university.

“One of our big initiatives has been creating Penn State’s first official land acknowledgement,” Benally said, “which acknowledges the 15-plus tribes that inhabited Pennsylvania and were displaced off the land.”

The land acknowledgement is ongoing but it’s a major first step for the newly formed student association. The association has also been able to gain a seat in student government.

“That seat will always be available for a Native student to come and give their input in these student council meetings,” Benally said.

Benally is happy to be a part of a team that is helping create lasting changes to the university and although he is graduating and working as a public information officer for the Navajo Nation Speaker’s office, he hopes to continue working with students to show them that their path is out there.

“I really think Penn State can become a hub for not only Navajo students, but other Native students,” Benally said. “Rez kids can thrive, whether that’s on or off the reservation.”