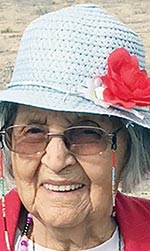 Jane lived in Arizona since the late 1950s and is best known as a Dine’ silversmith and CEO of Navajo Silvercraft based in Phoenix. She participated in numerous arts and craft shows across the country and around the world. Her jewelry was purchased and collected from the Indian Market in Santa Fe, to shops in Scottsdale, Arizona.

Jane also enjoyed being with her children and grandchildren and going to church whenever possible. She always enjoyed visiting friends and family near Shiprock.

Whitney & Murphy Funeral Home is in charge of arrangements. 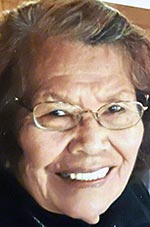 Della, our strong Navajo matriarch, was born Jan. 10, 1930, in Whippoorwill, Arizona, to Bah and Dan D. Begay, into the Kiyaa’áanii (Towering House Clan), born for Táchii’nii (Red Running Into the Water People Clan). Her maternal grandfather was ‘Áshįįhí (Salt People) and her paternal grandfather was Tódích’íi’nii (Bitter Water). She passed away April 21, 2021, in West Valley City, Utah.

Della married Henry McCurtain on Oct. 9, 1965, in Salt Lake City, Utah. She was a loving wife and mother.

Della attended Chinle Boarding School and left Arizona to attend Intermountain Indian School in Brigham City, Utah. After completing her education, she worked at the LDS Hospital as a nurse’s aide. After that, she started a family.

Della was a homemaker and once her children were old enough, she worked and retired from E and J Manufacturing.

Della loved gardening vegetables and flowers. She loved birds, collecting rocks, embroidery, sewing, watching the Utah Jazz, and supporting her grandchildren in their activities. Weaving Navajo rugs was one of her specialties. She loved her cat, Grim, and enjoyed family gatherings.

Della is preceded in death by her parents, Bah and Dan D. Begay; and an infant brother and older sister who was a young girl.

Memorial Redwood Mortuary and Cemetery was in charge of arrangements.

Martha was born Jan. 26, 1947, in Fort Defiance, into the Bit’ahnii (Folded Arms People Clan), born for Naasht’ézhí dine’é Táchii’nii (Zuni Red Running Into the Water People Clan). Her maternal grandfathers were of the Mą’ii deeshgiizhinii (Coyote Pass) and her paternal grandfathers were of the Kinyaa’áanii (Towering House). She passed away April 19, 2021, in Show Low, Arizona.

Martha worked for the Indian Health Service in Fort Defiance and Gallup for many years, retiring in 2011. She was a very caring and loving person, living both by the Navajo traditional way and the Catholic way, in which she was a lifelong parishioner of St. John the Evangelist Catholic Church in Houck.

Martha loved to run, take long walks, travel, attend church and revivals, and enjoyed the company of her family. She was well loved by all and will be dearly missed.

The Murphy family wishes to send their thanks and appreciation for all the outpouring of love and support during this time of loss. 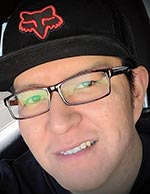 Randy was born March 23, 1993, in Shiprock, to Randy Washburn and Bettylene Lee. He was born for Táchii’nii (Red Running Into the Water People Clan), by Tódík’ózhí (Salt Water Clan). His maternal cheii is Tódích’íi’nii (Bitter Water) and paternal nalí is Tł’ááshchí’í (Red Bottom People).

Randy graduated from Career Prep High in 2011 and attended San Juan College in 2014, where he received his Class A CDL license. He last worked for CNJ Oilfield Services and several companies in the community. He was a very hard worker and enjoyed the field that he worked in.

Randy loved working on his truck, racing, drawing, and his daughters. He loved being a truck driver and took pride in the work he did. He even customized his work semi to his liking.

Randy believed in the Lord Jesus Christ as his personal Savior. He taught his girls to pray daily and to always be thankful.

Randy is preceded in death by his mother, Bettylene Lee; and great-grandparents, Tom and Mae Edwards. 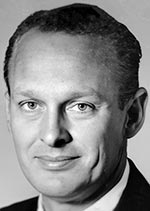 J.R. was born Aug. 9, 1922, to a Texas minister/sharecropper and a former one-room teacher. He was the sixth of eight children. He died April 24, 2021, at Mercy Regional Medical Center in Durango, Colorado.

During the Depression, the family rode in the back of their truck to work in the canneries of California, but eventually returned to rural Donley County, Texas, where J.R. met Margaret Jean Leathers. She fell for him when he sang “Beautiful Dreamer” in a high school quartet. They married in 1943 while he was serving in World War II. He lost two brothers in that war and a third was held for months in a Nazi camp.

After his service, J.R. obtained a degree in education. He also received his master’s degree and his administrative certificate. He taught high school and college Spanish and was a basketball coach in Colorado, Texas, and Arizona. He served as a principal in Pagosa Springs, Colorado, Red Mesa High School in Red Mesa, Arizona, and taught many history and civics classes.

J.R. fervently valued democracy and civil rights. He was drawn to the underdog. As an educator, he sought fairness.

Always a keen sports fan, J.R. was known to write letters to the NFL and NBA about his views on referee calls. He owned and operated health food stores in Durango and New Mexico.

Quick-witted and charming, J.R. worked at the Mesa Verde Museum, Colorado Welcome Center, looked after his bird feeders, set lofty goals for his questionable carpentry skills, and talked politics. He lived near Dove Creek, Colorado, where he began his teaching career.

In his last years, J.R. replaced “thank you” with “bless you”. He was a blessing to multitudes of students who benefitted from his confidence in the worth of a good education and a strong work ethic.

J.R. is survived by his son, Jan; daughter, Sharon McAnear; and five grandchildren and 11 great-grandchildren.

J.R. is preceded in death by his dear wife, Jean; and loving son, Jay.

NASCHITTI, N.M. — Graveside service for Jonathan B. Francisco, 59, of Naschitti, New Mexico, will be held today, April 29, at the family plot in Naschitti, with Sister Marlene officiating.

Jonathan graduated from Cobre High School in Bayard, New Mexico, and from the diesel mechanic program at Navajo Technical University.

Jonathan enjoyed mechanic work, welding, carpentry, tending to the ranch, and silver work. He loved to joke and spend time with family and friends.

Jonathan is preceded in death by his mother, Jannie Francisco; and grandparents, Olive and Martin Francisco.