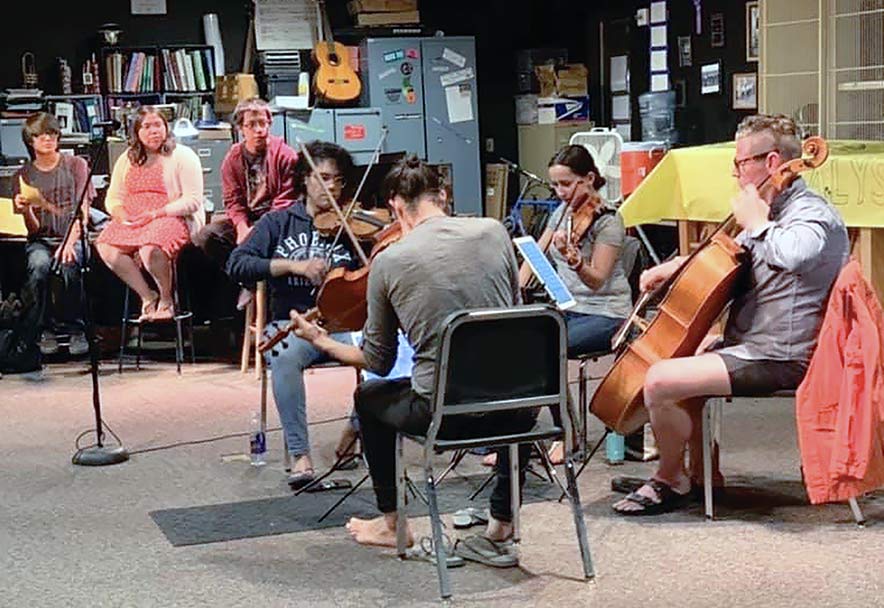 Courtesy photo
The Catalyst string quartet works with Chinle High School students on their compositions for the Native American Composer Apprentice Project last fall. Some NACAP alumni will act as teaching assistants for the new Weekend Music Academy, which will allow youth free access to music instruction on Sundays in Tuba City and Chinle.

With schools across the reservation scrapping their music programs, it’s becoming harder and harder for kids to learn an instrument, train their singing voices or just learn to appreciate the songs they listen to on their smartphones.

That doesn’t sit well with Daniel R. Lewis, founder of the Lewis Prize for Music, who, according to the prize’s website, believes “young people with access to high-quality music learning, performance and creation opportunities will mature into thriving individuals.”

Part of that grant will go to the Weekend Music Academy, which premiers this Sunday at Chinle High School. Any child age 6 to 18 interested in developing their musical skills is welcome to come to the high school’s band room this coming Sunday from 1 p.m. to 4 p.m., where they will have access to three trained music teachers and four teen teaching assistants to help them hone their skills and then jam with others on common material.

“Making music immediately is fun and engaging for all,” said Chinle High School music teacher Eric Swanson, one of the academy’s instructors.

Students of all skill levels, even those who have never picked up an instrument before, are welcome. Staff will provide private lessons with each student, followed by a group lesson and practice time. After a snack break, a jam session will take place to allow students to show off and enjoy their newly learned skills. Practice tips will be offered so students can continue to improve at home between sessions.

“All you need is an instrument!” said Swanson, noting the program will provide pianos and drums, and kids who don’t own an instrument can start by learning to sing. The atmosphere will be, according to Swanson, “an inclusive, positive community-building activity based around learning music.” He added it could be a “game-changer” for kids who don’t otherwise have access to music instruction.

Between the three teachers and four TAs, all of whom are alumni of NACAP, the instructors “have the skills to teach most any instrument a student might want to learn,” Swanson said. “If someone has an instrument a teacher might not have experience with, we can learn the instrument together, the teachers role-modeling curiosity and joy for learning music,” he said.

For the rest of the school year, the academy will alternate between Chinle and Tuba City, but if it’s successful, the organizers hope to eventually spread it throughout the Navajo Nation.

To register a youth for the program, download the form at https://grandcanyonmusicfest.org/education-nacap-sor/ or request a form by email.