When it comes to the discussion of the great ones in professional basketball, from Michael Jordan to Bill Russell to Kareem Abdul-Jabaar, the discourse of those conversations usually fall into the realm of pitting one against the other. 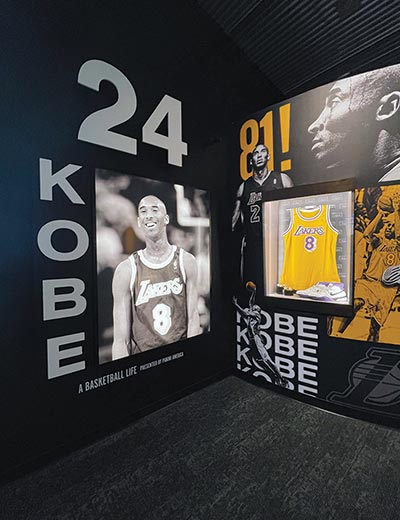 Special to the Times |Kyler Litson
The late Laker’s star Kobe Bryant on May 15 was inducted into the 2020 Naismith Memorial Basketball Hall of Fame.

From NBA titles won to total career stats to who played against better competition, it’s always a heated debate among fans and players of the game.

We often get caught up in these feverish debates about who is better, forgetting about the special memories that these larger than life icons leave on us. For me, a lifelong Los Angeles Lakers fan, many special memories were created watching the late great Kobe Bean Bryant.

Growing up in Window Rock, Arizona, basketball is a staple of life. I believe it comes from the love our Diné people have for the game and the atmosphere it creates.

If I wasn’t watching the Window Rock Scouts with their run-and-gun offense in a packed Veteran’s Memorial Field House, I was watching Kobe Bryant write poetry with motion on a basketball court.

A month ago, I was boarding my first plane ride in well over a year to attend the Naismith Memorial Basketball Hall of Fame Enshrinement Ceremony at the Mohegan Sun Casino and Resort in Uncasville, Connecticut. The reason for attending was simple: to see Kobe Bryant’s induction with the 2020 Hall of Fame class which included Tim Duncan, Kevin Garnett, and Tamika Catchings.

My brother Sheldon, also a die-hard Lakers fan, and I purchased tickets for the ceremony in early 2020. The event was originally scheduled for August of that year but was postponed due to the COVID-19 pandemic.

In the early hours of a cool Thursday morning, my brother and I, both fully vaccinated, boarded a 6 a.m. flight from Phoenix to Chicago, followed by a connecting flight to Boston.

It was strange and daunting to be traveling again after a year and some months in a pandemic. I found myself always alert to make sure my mask was properly on and my hand sanitizer was near. The trip that was long sidelined was finally underway.

On the flight, I began to recount the many memories I had of my favorite basketball player. All the way back to running home from a long school day to watch the “Air vs. Air” game between Kobe and Michael Jordan.

I recalled wearing my pair of the infamous Adidas’ “Kobe Two” shoes to the Window Rock Scouts’ summer basketball camp in Fort Defiance. Everyone called them “space boots” or said my shoes made me look like I had “Michelin Man feet.”

I have a good laugh about that one. In all honesty, they did look like astronaut shoes.

I remember the intense playoff games the Lakers had against the Phoenix Suns in the late 2000s, and the bantering back and forth with friends and family whenever our team got a win over the other.

The first time I saw Kobe and the Lakers live came in the 2010 Western Conference Finals against the Suns at a game in Phoenix, also with my brother Sheldon.

I was in awe as I watched my favorite player race up and down the court, no longer through our fuzzy television screen at home but in-person. That is a truly special moment that I cherish deeply.

I grew up watching Kobe Bryant play basketball. I remember racing home on Indian Route 12 on the blue bus from Window Rock Elementary to catch midseason games. I especially recollect driving down the 101 South Freeway in Phoenix after a day of classes at Arizona State to watch Kobe’s final game.

Even after Kobe’s tragic passing, memories were still made. In the final weekend of February 2020, I traveled home to Window Rock to visit family. My grandfather, Tommy Arviso Sr., also a huge Lakers fan, was over at our house for the evening.

I asked him if he got a chance to see the memorial service held for Kobe and his daughter, Gianna, at Staples Center and he said, “No, I couldn’t find the right channel.”

I pulled up a video of the service on our television and together with my mother, Emily, we watched it. After it ended, I glanced over at my grandpa and saw that he had tears in his eyes.
I consoled him and hugged him and told him, “Grandpa, everything is going to be all right.”

My mother and I drove my grandpa home later that evening and we then talked with him in his small quiet room about life and how precious it is. 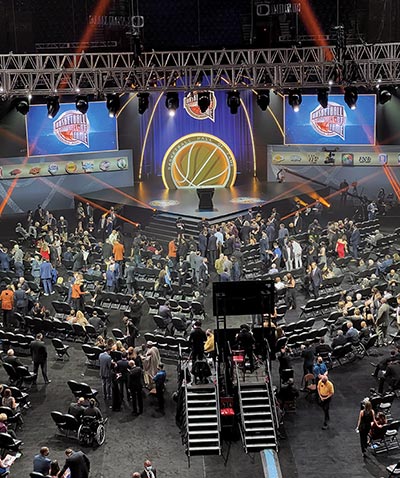 Special to the Times |Kyler Litson
The Naismith Memorial Basketball Hall of Fame Enshrinement Ceremony at the Mohegan Sun Casino and Resort in Uncasville, Connecticut, where on May 15 Kobe Bryant was inducted into the 2020 Hall of Fame class, which included Tim Duncan, Kevin Garnett and Tamika Catchings.

I had no idea that would be the final weekend I ever got to spend with my grandpa and that it was the last time I would ever see him in our family home. My grandpa passed away on April 1st. I think back on that weekend a lot with great comfort and appreciation of it.

Now, I was on a plane to Connecticut, thinking of Kobe and my grandpa, and how they strangely intertwined at the end of their lives and the meaning of it all.

We touched down in Boston, drove about two hours to Norwichtown, Connecticut, where we stayed at a hotel just off the turnpike.

The next day we arrived early at the Mohegan Sun for our mandatory COVID-19 test. The hall of fame induction ceremony required a negative COVID-19 test within 48 hours in order to be allowed entrance to the event. My brother and I did our nasal swab, waited about 30 minutes for our results and they came back negative. Now, we were all set.

Walking through the giant halls of the Mohegan Sun, which is owned and operated by the sovereign Mohegan Tribe, I thought about our casinos back home. You could take all the casinos owned by the Navajo Nation and combine them and it still wouldn’t match the size of the Mohegan Sun. It’s a modern-day castle of gambling and shopping.

The day of the enshrinement ceremony finally arrived, and the area was packed with excited fans of the Lakers, Spurs and Celtics.

In our hotel room, my brother and I got dressed up in our slacks and button-ups because the ceremony dress code was formal. We joked about how this was the first time either of us got dressed up in a long time.

The ceremony was held at the Mohegan Sun arena with capacity well below maximum level and with buffer seating. Everyone was dressed up in suits, button-ups, and dresses.

Some people ditched the dress shoes in favor of their favorite pair of Kobe sneakers like my brother did. Others had their Kobe jersey stitched into the inside of their suit jackets and some just flat out wore their jersey.

We made our way in and quickly found our seats. The event started with the induction of the Minnesota Timberwolves and Boston Celtics star Kevin Garnett.

The speeches by all of the inductees echoed sentiments of hard work and dedication to their craft whether it was playing or coaching. Their remarks, recollections and jokes were all very well done and moving to hear.

After all the other inductees were enshrined, there was only one name left. The crowd inside the Mohegan Sun arena loudly let it be known who it was. “Kobe! Kobe! Kobe!” they chanted.

After a thrilling 20-year career with the Los Angeles Lakers that saw five NBA championships, one NBA MVP award, and 18 NBA All-Star selections, it was time for the crowning achievement of an extraordinary career.

The air was flexing with anticipation and emotion as Vanessa Bryant took the stage with Michael Jordan to accept induction into the basketball Hall of Fame on Kobe’s behalf. Her presence was strong and uplifting as she talked about her late husband and his drive for greatness on the court and off.

She said that Kobe was not just a basketball player, but also a loving father, caring friend, and a true family man. She talked about his daily routine and the sacrifices he made to be the revered icon he is.

Her words were comforting and the perfect encapsulation of everything I’ve come to love and learn from watching Kobe Bryant.

She concluded her speech to thunderous applause and more chants of “Kobe! Kobe! Kobe!” that echoed across the arena and beyond.

For me, Kobe’s basketball life was truly something special and surreal to witness. Starting from the early beginnings of his career and leading up to that exact moment of his induction into the hall of fame, Kobe and his career will be forever ingrained in my love for basketball.

In the waves of dealing with grief, to see Vanessa Bryant stand firm and proud in the presence of family, friends and millions of fans, it will forever hold strong my belief that through the darkest of days there will always be light at the end.