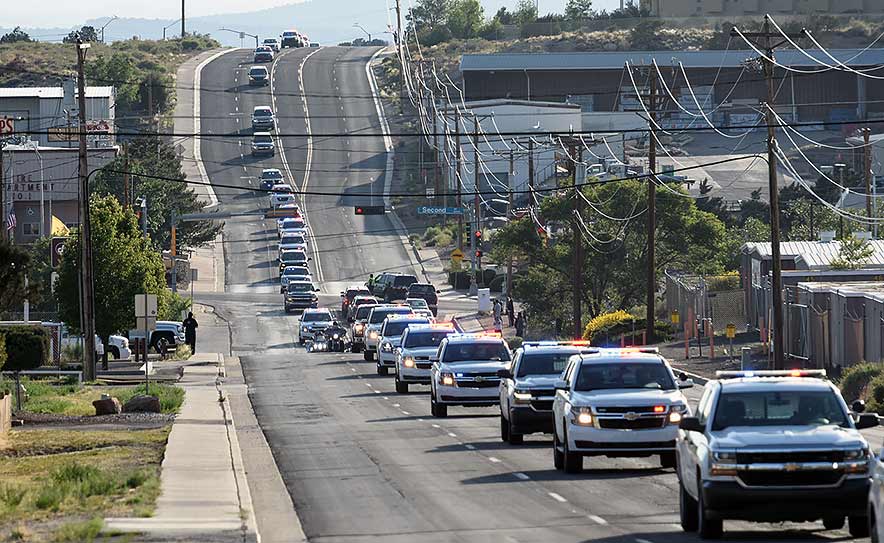 He was a husband, a father, and a Navajo Police officer. Senior Police Officer Michael Lee was also in charge of putting smiles on children’s faces during Christmas in the Chinle District. He gave out toys in the “Toys4Tots” program and regularly traveled to California to haul donated toys back.

“My heart saddens as I express my deepest condolences to the family of Officer Michael Lee and ahxéhéé for your many years of service to the Navajo Nation,” Vernita Largo wrote on Saturday on the Navajo Police’s social media page after learning of Lee’s death due to COVID-19 on June 19. “Children of (Navajo) Nation will miss you during Christmas,” she said, “you were Santa to them, you took long trips and hauled toys back to Nation just to brightened up a child’s face.”

Cdr. Roscoe Herrera, a fellow Navajo Law Enforcement Academy graduate, remembered his classmate from their days at the academy in Toyei, Arizona. The academy then was notorious for having a high dropout rate due to the demanding physical rigors drill instructors forced on police recruits. “We all had to pull together to get through,” Herrera remembered. “We had to depend on each other and work as a team.”

After six months of pushing one another, studying for exams together, running and doing pushups together, Herrera said they got their badges pinned together.

Although it challenged him to stretch his memory back 29 years, Herrera remembered how they “went through hell” to become Navajo Nation Police officers. He was not sure but recalled that 14 recruits become police officers that day in October of 1990, in the midst of the Gulf War. While many young Navajos prepared for war, Lee’s and Herrera’s services to the Navajo Nation had just begun.

Herrera now works with the Apache County Sheriff’s Office. He said he was surprised the “monster” took Lee’s life when he got word of his passing. “When I heard of his passing, I just remembered him and from our academy days,” he said. “I remember working with him briefly in Window Rock when he was there.”

Lee worked at the Window Rock District for seven years. Peterson Zah had become the first tribal president. A year earlier, a riot had claimed the lives of two people when then-Navajo Tribal Chairman Peter MacDonald was placed on administrative leave by the Navajo Nation Council.

As a rookie patrol officer, Lee had to ensure peace and order was maintained, despite MacDonald and his supporters accusing the Navajo Police of overreacting and causing the death of the two supporters. Seven years later, Lee transferred to the Chinle District where he was working before his life taken by the virus at the Banner University Medical Center in Phoenix. Herrera said Lee’s life being taken by the coronavirus saddened him.

“We try and protect ourselves, of course, we put ourselves out there,” he said. “Somebody I went through that hell with to get through the academy, that’s what brought me down. This virus, is a whole different monster, that’s out there.” Navajo Nation Police Chief Phillip Francisco also remembered Lee, calling him a “very dedicated” officer. 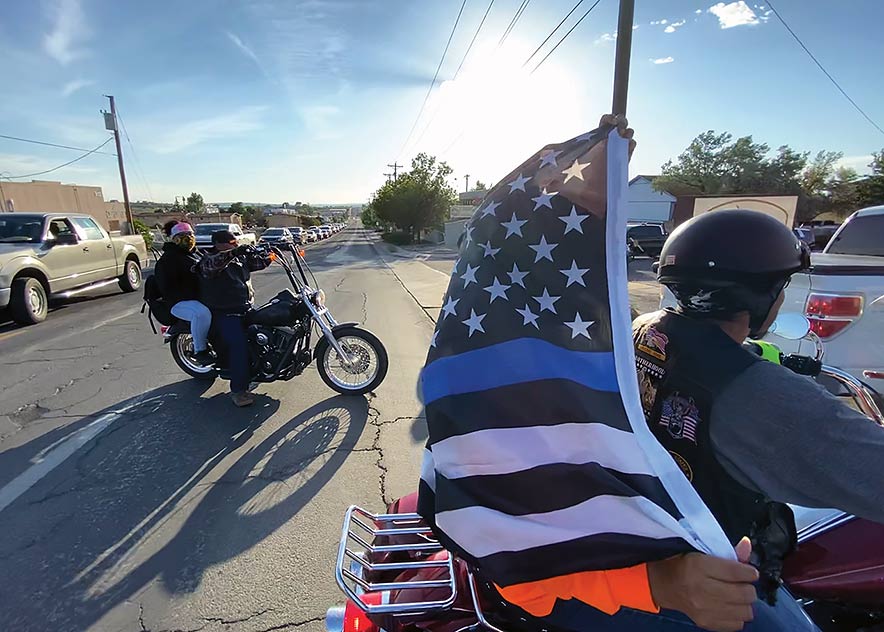 A “thin blue line” flag that represents law enforcement is carried by a motorcyclist who participated in a procession on June 19 for the hearse carrying fallen Navajo Nation Senior Police Officer Michael Lee, who died from COVID-19.

“Officer Lee was adamant about keeping family members safe during this pandemic,” Francisco said. He added Lee was recognized for his efforts and received an award for keeping the “Toys4Tots” program going. “He was dedicated. A great loss,” Francisco said.

On Friday, dozens of law enforcement officers led a procession into Gallup escorting Lee’s hearse. The sound of sirens echoed throughout the area. Navajo and Gallup police officers stood at attention side by side. They saluted their fallen fellow warrior as his body was taken into Rollie Mortuary.

One Navajo Police officer stood at attention as tears slowly rolled down her face. Afterward, the officers spoke amongst themselves, talking about the other officers who were also fighting for their lives against COVID-19. Mauricio Moreno, with Rollie Mortuary, confirmed Navajo Police officers have been taking turns standing watch over Lee’s coffin since Friday, their police units parked in the parking lot.

Services for Lee will be held at the Potter’s House Christian Center in Chinle this morning (Thursday). Navajo Nation flags were ordered to half-staff on Wednesday, ending today. Due to the pandemic, services will be limited to immediate family only, but it may be live-streamed.

“The family of Officer Lee is prioritizing the safety and well-being of everyone who wants to pay their respect and is emphasizing adhering to public health orders as the service becomes finalized,” a statement from the Navajo Police said. Lee’s family is accepting donations and set up a Wells Fargo memorial account called “Memorial Account for Officer Michael Lee.”