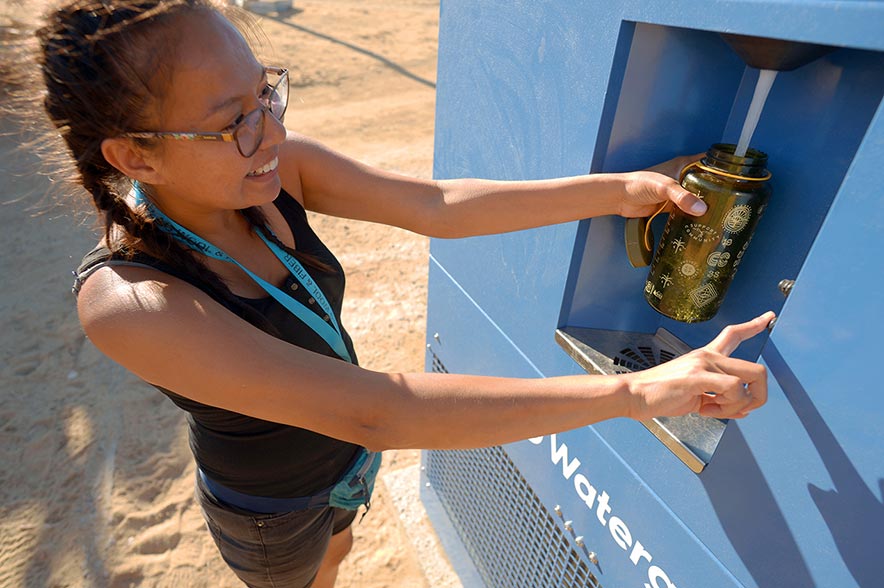 Even in a state of water shortages, the Navajo Nation has immediate access to billions of gallons of water.

The tribe has a right, under New Mexico and Utah water settlements, to more than 33 billion gallons of water on an annual basis.

But the infrastructure to move that amount of water is not in place. Large transmission lines must be built to move the water.

If there was an infrastructure in place, the water could be used by Navajo ranchers and farmers, said Rex Kontz, deputy general manager for the Navajo Tribal Utility Authority, in an interview on Tuesday.

“You could use it for agriculture,” he said. “You’ll have all kinds of water for livestock. We’re already planning on putting more watering stations along the Navajo-Gallup Pipeline and Cutter Lateral Line.”

Kontz said a pipeline is currently providing water to some areas in the Eastern Agency.

“There’s a lot of ranchers on eastern side,” he said. “So we’re gonna say, ‘Well, yeah, we’ll sell you the water, it’ll be cheap water.’

“But we need water flowing to make that pipeline sustainable,” he said. “And we want everybody to use it as much as they can use it.”

Kontz said under the current structure, a Navajo household uses about 140 gallons a day, compared to a home that uses 800 gallons a day in a large metropolitan area.

Instead of utilizing all the water the tribe has a right to, the utility company asked its customers to get into the habit of conserving the water they pay for and use.

On July 7, NTUA restricted the amount of water people could take from its water-loading stations and asked consumers to conserve water.

“We are asking everyone to conserve water and hopefully we won’t have to enact any tighter restrictions,” said Kontz. “Minimizing water use will avoid a crisis situation.”

Kontz has a point. 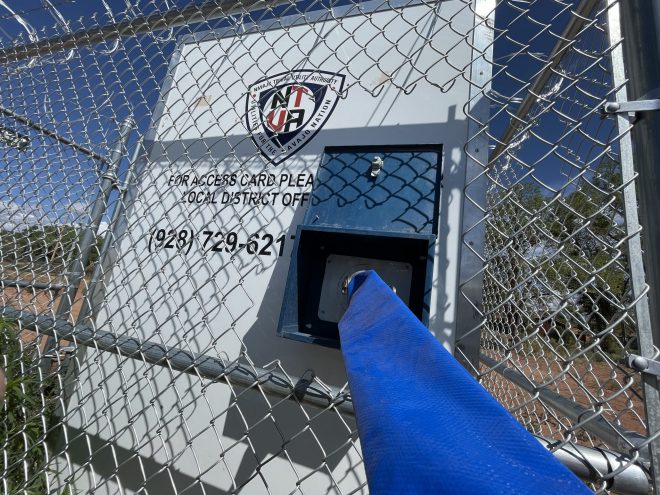 While a few areas in the Navajo Nation received nearly an inch of rain, much of the reservation received less than half an inch of precipitation, despite some places getting a heavy downpour, according to data from the Colorado River Basin Forecast Center.

On June 27, water levels in some NTUA tanks dropped two feet, Kontz said, because some water-loading station customers are filling their 100- to 200-gallon water tanks repeatedly throughout the day.

He said NTUA found one customer took 6,000 gallons of water in two days. The significant drop in water levels prompted issuance of the water restriction.

The restriction, Kontz said, has been helping tank levels to recover.

“However, we are just starting the summer season and anticipate more hot weather through July, August and even September,” he said.

“What people don’t understand is that the groundwater, where you’re pumping water out of the ground, that’s recharged by snowfall,” he said. “So, it soaks in slowly over time and that’s what recharges them.”

Kontz explained how monsoons play a role in resupplying groundwater.

“The monsoons would help by filling up local ponds and places where wildlife and livestock might water,” he said. “It doesn’t really help the groundwater and the supply for the community system. That’s some kind of misunderstanding because we’ve had a long-term drought.”

NTUA has approximately 39,000 customers and has 18 water-loading stations that serve an unknown number of additional customers who do not have access to a piped water system.

Those communities get water from the city of Farmington. The city issued a water shortage advisory and sent a letter to NTUA on May 27, informing them it would encourage its customers to reduce their water usage by 10%.

According to the Navajo Department of Water Resource, the total consumption of drinking water is approximately more than 3.9 billion gallons annually. On average, water use on the reservation ranges from 10 gallons to 100 gallons a day. Neighboring border towns use up to 180 gallons a day.

With water shortages becoming a concern for the future, space-age technology that captures water from the air is being developed.

Watergen, a company based in Israel, recently brought its miracle water-generating machine to Hard Rock, Arizona, where it was set up to demonstrate how it works.

The machine, which looks like a large square blue metal box, requires 208 volts of electricity. For the most part, the water-generating machine sits idle until it turns on, sounding like a refrigerator. It seems to be a promising solution to the tribe’s water shortage woes.

Nicole Horseherder, executive director of Tó Nizhóní Ání, who helped bring the machine to Hard Rock, said the water-generating machine is not going to be a water-savior for Navajos.

“No, not at all,” said Horseherder, who is from Tsé bik’i na’astsxélé, about 15 miles northeast of Hard Rock. “Watergen is only one solution. It’s only one solution to the problem of water. In the bigger picture, it will not solve all the water issues.

“NTUA has not been able to solve all the water and that’s obvious,” she said. “People should understand that one company like NTUA, that just so happens to be able to drill wells and deliver water to people, doesn’t mean that they have all the answers, and we shouldn’t look to them to solve all the problems.”

Kontz agreed and said technology like Watergen’s would not be enough to sustain a home and was suitable only for emergency purposes. His concern was for conserving water.

During the 2020 pandemic, volunteer groups like Water Warriors and DigDeep used various water sources on the reservation, including NTUA water-loading stations.

Koontz said he had a meeting with DigDeep, which provides service to its water customers in the Dilkon area.

“We don’t know how many they’ve done and where they’re hauling their waters,” Kontz said. “We weren’t asked for input on it. So, we had no control over those individuals. And we cautioned, very heavily, about not doing those types of systems in certain areas.”

Horseherder said the chapter has not yet begun enforcing the NTUA water restrictions. She said the chapter wanted more information and to clarify its meaning before starting implementation.

“The clouds come in every day, and it doesn’t rain,” she said. “It’s been very, very hard not to be able to plant corn. It makes life extra hard.

“We have to do our part to respond to the drought,” she said. “If we have livestock, we need to cut back.

“The other thing that we have to do at this time,” she said, “is we need to go out and start land restoration projects.”

And to keep outside influences from influencing Congress from taking more Navajo water rights away, Kontz said the Navajo people must starting planning.

“The real challenge is trying to get all of our people to understand they need to start planning big,” he said. “When you go to the remote chapters, they don’t live that way. It’s real hard for them to envision something. When I bring in younger people, they start talking about all kinds of stuff.”