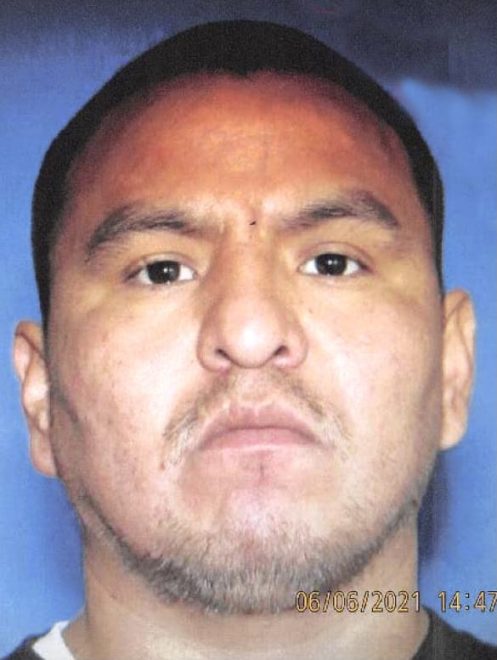 Courtesy Navajo Police Department
Anyone with information about Kendale Johnson is encouraged to called Shiprock Police Department at 505-368-1350/1351, or your local law enforcement agency.

However, authorities are still on the lookout for one more individual: Kendale Johnson.

On Wednesday night, Navajo Police officers and their partners pursued two different vehicles. Johnson is believed to have been in one of them.

The pursuits ended with the occupants abandoning the vehicles resulting in a foot search of the Shiprock area where five individuals were apprehended, according to Navajo Nation Police.

“The last several months, there has been a rash of car thefts and home invasions in the Shiprock area,” said Chief of Navajo Police Phillip Francisco in an interview with the Navajo Times.

“Come to find out that it’s all kind of related,” he said, “so we have been trying to catch this particular gentleman who seems to be heavily involved with it.”

A task force was formed for these crimes, which led to the pursuit.

During the pursuit, suspects threw “homemade spike devices” at officers and two police units had their tires blown out. Another police unit was rammed by one of the suspects.

The arrest of the five individuals resulted from an effort by multiple agencies, including the San Juan County Sheriff’s Office, which provided aerial support, the Navajo Department of Emergency Management, which provided drone support, the city of Farmington’s K-9 unit, Bureau of Indian Affairs, and state and federal officials.

“None of my officers were hurt,” Francisco said. “We are asking the public for help in locating this gentleman who is causing havoc in our community for several months now.”

In March, the Navajo Department of Corrections abruptly shut down the Shiprock Correction Facility. This closure has left the Navajo Nation Police with the arduous task of transporting prisoners to the Kayenta or Crownpoint jails, adding an extra two hours to one call, leaving Shiprock with less officers to patrol the community.

Francisco said this crime spree is widely known, and it is believed that Johnson and other suspects have used the lack of law enforcement coverage as an opportunity to commit more crimes, as they have for the past few months.

“They seem to be organized, is what we think,” Francisco said. “They’ve been watching and monitoring police activity and knew the best times to take advantage of our depleted resources, which have been even more pronounced with the closure of correction center and officers having to transport hours out of district.”

A vehicle Johnson is known to drive, a Black Chevy SUV, was abandoned and recovered last night. However, Johnson managed to elude capture and remains at large.

He has known ties to the Beclabito, Hogback, Shiprock and Dennehotso areas. He is known to frequent the Southeast Heights area in Shiprock.

He is Navajo and is considered armed and dangerous and should not be approached. 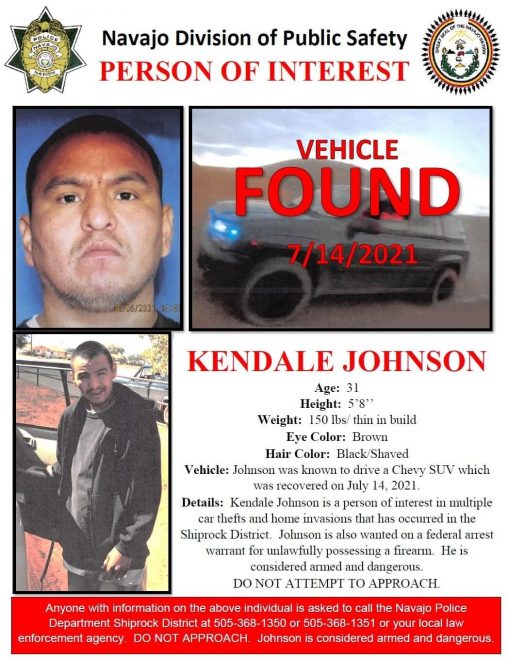 Courtesy Navajo Police Department
Anyone with information about Kendale Johnson is encouraged to call Shiprock Police District at 505-368-1350/1351, or your local law enforcement agency.