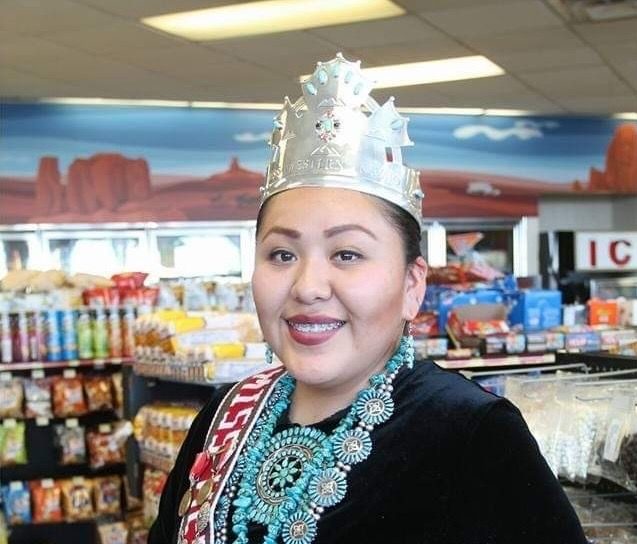 Courtesy photo
Valentina Blackhorse died Thursday of complications due to the novel coronavirus.

They are a year and 10 months apart in age, but Vanielle Blackhorse was often mistaken for her sister, former Miss Western Navajo Valentina Blackhorse, who died of coronavirus Thursday at the age of 28.

“I liked it because people always looked up to her,” Vanielle, 26, said about their resemblance. “She was so smart, she knew everything.”

Valentina and her younger sister Vanielle were pregnant at the same time. They talked about their daughters’ futures and how close their girls would be to one another, just as they were growing up.

“And we planned on enjoying motherhood together because our daughters are only two weeks apart,” Vanielle said in an emotional family interview with the Navajo Times on Saturday morning. “And we would always say we are going to be there for our kids as they go to school and run in pageants.”

“That’s a picture of us three girls together,” said 31-year-old Victoria Blackhorse, Valentina and Vanielle’s elder sister, who showed a selfie of them together. “People used to call us ‘The V girls.’”

Laverne Blackhorse, 62, said she doesn’t remember when Valentina got ill, but her daughter’s boyfriend, Robby Jones, had tested positive for COVID-19 and she was taking care of Jones.

It wasn’t until Robby encouraged Valentina to go to the clinic with their baby that both were tested. Both Valentina and Poet tested negative at the time.

“This is what she told us: I guess her boyfriend told her, ‘Just stay at your mom’s place,’” Laverne explained. “She didn’t want to, but she dropped off her little girl here. She told me she’s going to take care of her boyfriend.

“We kept telling her to go to the clinic. She did, but she was afraid to be admitted. She had pain in her legs, she couldn’t breathe. … Her boyfriend took her to the clinic again and they found out she had an infection and then she got pneumonia and then a liver infection.”

“She was only 28,” Laverne said as she cried. “It’s a very dangerous virus that’s going on that took my baby –– my beautiful baby.”

A GoFundMe fundraiser has been created for Valentina’s funeral expenses. A total of $5,242 has been raised of a $5,000 goal as of Sunday morning, April 26.