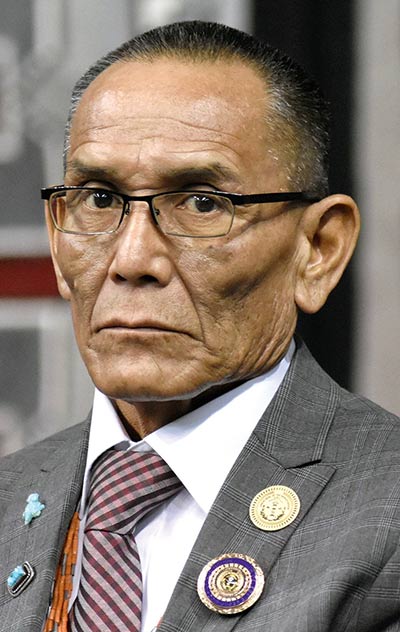 Navajo Nation Council Delegate Pernell Halona from Tohatchi wrote on his now deleted Facebook page that he wanted to share a “message with everyone” before they saw a video being released showing his “private parts.”

Halona claimed he was a victim of a scam.

“I met a women who befriended me online,” he wrote. “She seemed very nice. I know now I should have used better judgement.”

Halona continued writing that he knew he should have stopped the video chat when the woman sent him a nude video, but he kept going because his “curiosity got the best of me.”

Halona spoke with the Navajo Times on Saturday morning and said the woman talked him into sending him a video showing his “private parts.”

After he obliged, he said she told him she wanted $4,000 or she would release the video to his Facebook friends. Rather than give into her demands, he said he decided to go public.

Halona said he called the FBI and said he was told they “would get back to him.”

Halona added he contacted Facebook and said he was told to delete his account, which he did.

“I think I was set up,” he said. “I have a lot of enemies who really want to bring me down.”

Halona said it wasn’t the first time he has met and chatted with women online and but he has used good judgment and did not go any further than that. This time, he said, he was not careful.

“I would how ever like to apologize to everyone for using poor judgment,” he wrote. “I am ashamed and embarrassed for not thinking with the right head.”

Halona won the District 14 delegate seat when his opponent, Steven Begay, died. Olin Kieyoomia was selected to serve as interim council delegate, until Halona was sworn in on Jan. 15.

In his Facebook profile, Halona states that he studied Business Administration/Management at San Juan College and owns a small business: Protree Services. Halona was recently appointed to serve on the Health, Education and Human Services Committee of the 24th Navajo Nation Council.