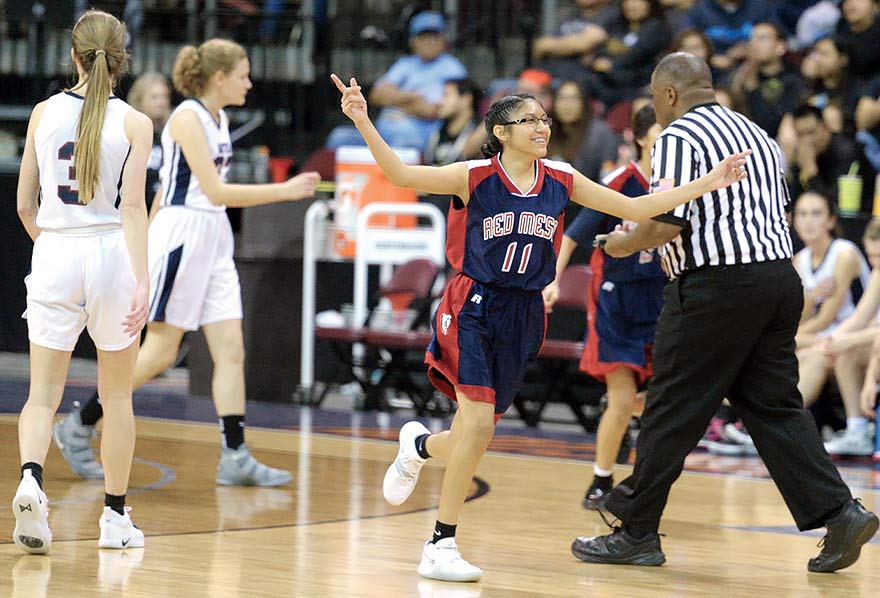 As one of the lower seeded teams remaining, the Red Mesa girls’ basketball team joined top-seeded Rock Point in the Final Four round of the Arizona 1A state playoffs.

The two teams from the 1A North earned victories on Saturday with the Rock Point Lady Cougars pulling away from No. 9 seed St. David late in the third quarter, winning 56-42.

Red Mesa, meanwhile, pounced on No. 3 seed Anthem Prep Lady Eagles in the second half, taking control of the contest with their relentless pressure.

The knockout punch is when No. 11 Red Mesa rattled off 16 straight points midway through the third quarter en route to a 57-36 win.

“In the first half we were trying to figure them out but I think we were kind of scared of their height,” Red Mesa coach Sandy Benally said of their opponent. “At halftime we talked it over and I told them that everything is there, you just need to play as a team.”

Before that momentum-changing run, senior guard Jessica Simpson got things going for Red Mesa with a pair of treys. Her second long bomb gave Red Mesa a 25-16 advantage with just over six minutes left in the third.

Behind six straight points from senior guard Brenna Pillsbury, Anthem Prep got as close as 25-22. Red Mesa, however, took advantage of five miscues by the Eagle to get the seperation they needed.

Senior guard Aaliyah Nez started that 16-point outburst by tallying five of her 13 points for a 30-22 edge. The lead was pushed to 41-22 on a basket by freshman guard Jada Begaye before Anthem Prep ended a three-minute scoring drought with a two-point shot from senior post MJ Roe.

“I told the girls one shot can make a difference and sure enough one 3 changed it,” Benally said.

Red Mesa is schedueled to play No. 2 Baboquivari on Friday at 10:30 a.m. at the Findlay Toyota Center in Prescott, Valley, Arizona. The championship game is slated for 11 a.m. on Saturday. 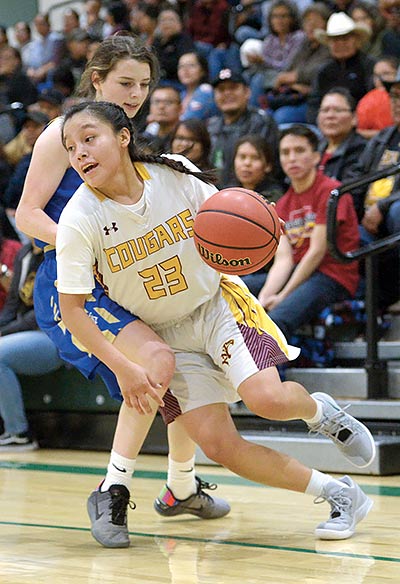 With it being a two-possession ballgame with two minutes left in the third stanza, the Lady Cougars came up with four consecutive stops to close out the quarter.

On their end, they made three baskets for a 45-35 cushion as they coasted from there, winnning 56-42.

“We just needed to watch our turnovers,” Rock Point coach Andrew Reed said of their run. “I thought we were rushing the ball down court and we missed a lot of layups early on because of rushing. We just needed to slow it down a little bit and be a little more patient.”

With his team geared into playing rezball, Reed acknowledged that slowing the pace of the game was hard to do.

“When it comes to game time my girls want to push the ball,” he said. “That’s how we like to play. We want to be aggressive on both ends of the court.”

Reed said he was happy that his team looked poised in the final 10 minutes of the game as they advance to play No. 5 seed Mogollon on Friday at 4:30 p.m. in Prescott Valley.

“It’s anybody’s game so my girls have to stay focused,” Reed said. “We just need to do our job and go after (Mogollon).”

Earlier this season, Mogollon defeated Rock Point by a 51-50 count during the Chandler Prep Holiday tournament.

“They beat us by one point but turnovers killed us,” he said.

In other state action, the Valley Lady Pirates were eliminated in the 2A bracket, falling to Scottsdale Christian by a 44-41 count.

Also on Saturday, the top-seeded Rock Point boys had their season come to an end in a 49-36 setback to No. 8 Mogollon.