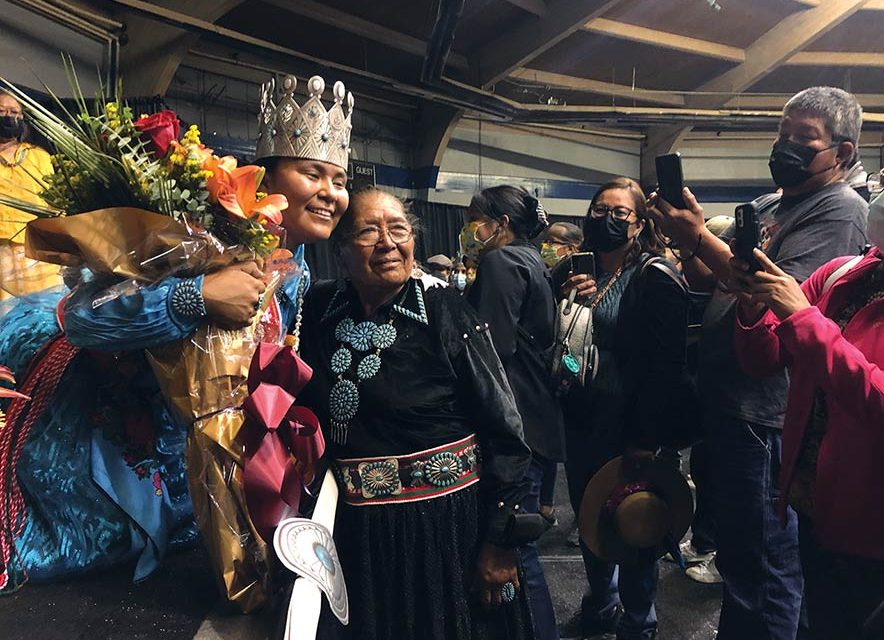 Clitso, 25, said becoming Miss Navajo was fulfilling for the “younger” her.

“I’m really proud of myself because it was younger me that wanted to become Miss Navajo, and it’s me today here,” she said.

Her aunts Fern and Elsie Benally say their niece began learning from her late grandmother, Mabel Benally, not only to use Navajo one day in a Miss Navajo competition but because that was the only way to communicate.

“Both her grandfather and her grandmother do not talk English,” Fern said. “Even on her paternal side, they don’t talk fluent English. They understand English.”

Fern said her niece graduated from Arizona State University, where she majored in engineering.

Even in the midst of attaining her college education, Fern said Clitso never lost sight of who she is.

“And we’re really thrilled for her that she’s been able to carry on her Navajo language however long, you know, even though her grandma, her másáni, had passed a few years ago,” Fern said.

Fern said the public should expect her niece to bridge the gap between young and old alike during her reign and teach children how to love themselves so they can be better prepared to take on the challenges in life.

Elsie said her niece still goes to the Kayenta Unified School District to talk with the students, share her experiences, and encourage them.

Both aunts say they’re exhilarated, excited, and nervous about what’s to come next year.

Elsie joked her niece needs to improve her sewing skills, while Fern said she was looking forward to what the next year brings for her niece.

Clitso said she had a unique upbringing and was raised by her grandparents, who spoke only Diné to her.

When it came time to write down her thoughts, she emphasized her childhood and how she was taught to value and honor herself.

For her essay, Clitso said language and traditions formed the foundation of her paper.

One of the challenges she said she sees is the gift grandparents have of speaking fluent Navajo but choosing to speak English to their grandchildren instead.

“And we are strong,” she said. “And we need to remind ourselves of that.”

She said part of her plan for the coming year as Miss Navajo is to encourage the youth to engage with the elderly.

“Our elders are only here very briefly, and I really hope that they can experience the love in our language, and just hear the words like ‘shiyázhí’ and ‘she’awéé’’ and just experience those feelings that our language can provide,” she said on Saturday night.

For the two sisters she’s gained from competing at this year’s 74th annual Navajo Nation Fair, Clitso said they’re both “amazing” women from whom she gave and received encouragement.

“I aspire to be like them to show the best of myself and to share what they showed me here during the week. They’ve taught me a lot during the week,” Clitso said of Briana Davis, 22, from Many Farms, and Gypsy Pete, 25, from Rock Point.

Davis and Pete also competed for the coveted title.

Clitso said she hopes she makes her family and the Navajo Nation proud as she embarks on her yearlong journey as the tribe’s ambassador.

“I hope that I made you very proud, and I hope to continue to make the Nation proud as I am now an ambassador of the Navajo Nation,” she said.