‘Together as one’: Diné happy to be back at the fair 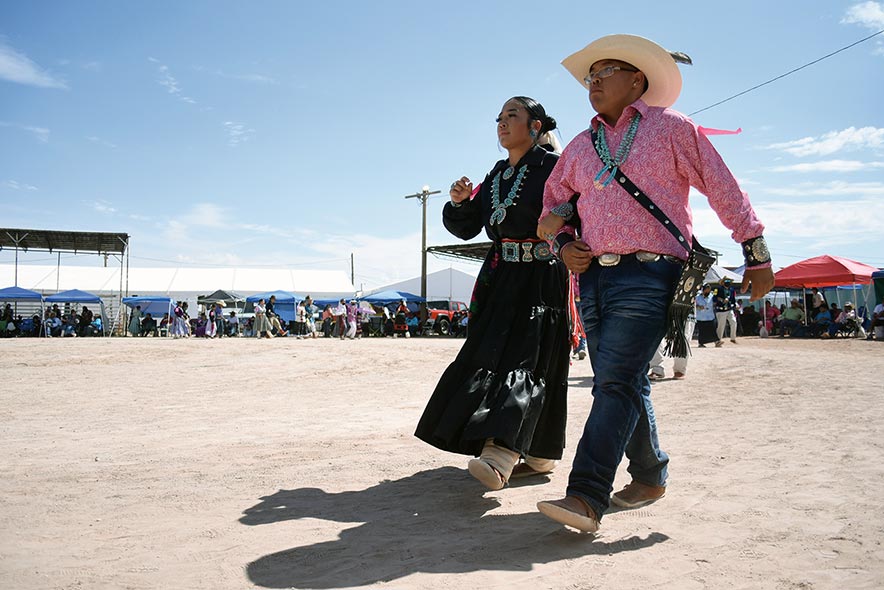 Special to the Times | Ravonelle Yazzie
Jonathan Poonna and Asianna Benalli dance together at the Navajo Nation Fair song and dance event in Window Rock on Sunday.

Standing by the packed song and dance arena last Saturday, Delegate Nathanial Brown said coming back together with friends and family amidst the massive all-ages turnout at the Navajo Nation Fair brought “good energy and good vibrations.”

“I just can’t get enough of it,” said Brown. “It’s medicine! It’s healing!

“I could see our elders, our másání, our cheiis, moms and dads, and especially the children – everyone was just smiling,” he said. “This is K’e. This is relationships.”

Brown said it is a huge relief to be past the fear and anxiety brought on by COVID-19 and subsequent lockdowns.

“We were at one time locked up and afraid,” he said. “People were dying. People were sad and scared.”

Today, he said, people are choosing to be in the present and live again.

“Coming together is what we missed,” he said. “We missed each other.”

“This is who we fight for,” he said. “It is for them that we need to put our differences aside. I could hear my grandma’s voice saying, “Those are our people – those are who you are.”

While watching the steady stream of people joyfully strolling through the fairgrounds and the large exhibition tents, Delegate Carl Slater said things finally felt like the way it was before the pandemic.

Participating in the parade was a high note for him, he said.

“To me, it felt so good to be surrounded by so many people who were just happy about the events, all the floats,” said Slater. “People bring their A game to this parade.”

“It feels so great to be back to the fair,” said Jasmine Blackwater-Nygren, wife of candidate for president Buu Nygren.

“It feels like because it’s back, it’s bigger and better,” she said.

“There was a huge turnout for the parade,” she said. “There’s a lot more things to do. The song and dance is happening, the powwow’s happening.”

Blackwater-Nygren said everything is starting to feel normal again, even though many people were still wearing masks.

“People are starting to feel more confident to be out in public and to be gathering,” she said.

Artist Penelope Joe said for her being at the fair was exciting and emotional at the same time.

“We were all really happy to be together as Diné people,” said Joe.

“It felt really at peace because I felt like I was with my whole family,” said Joe. “Even though some of us are still doing protocols, like wearing facemasks, we’re all together as one.”

Joe spent the whole week at the fair, starting with watching the Miss Navajo Nation pageant, singing the national anthem at the PBR rodeo, hosting her booth at the art market, judging the fashion showcase and then serving as head dancers with her partner, Milton James Jr., at the song and dance.

“It felt really good watching everybody love what they do,” she said. “It really touched my heart being with them and I just loved every single moment.”

This appreciation is even more profound after each and every single Diné has been touched by Covid, said Joe, whether by being sick or losing a loved one.

“We know what it’s like to be heartbroken at that moment,” said Joe. “We’ve all been through it, so seeing each and every one of them at the fair having a great time made me know we’re all going to be OK. At the end of the day, we’re all going to heal from it.”

Diné fashion designer Shannon Tallsalt said that in addition to seeing old friends and meeting new ones, to her the fair has always had to do with preparation, sustenance and survival.

“People bring their arts and crafts, their harvest, and their talents,” said Tallsalt. “People come to the fair to help support their families – it’s just a way of life.”

Tiya Manheimer, who brought her family to the fair from Navajo Mountain, said that it was uplifting to see everyone happy, cheerful and having a good time.

“I think it’s really nice because after Covid everyone’s really celebrating again,” said Manheimer. “It’s so great to be back together.”

Patiently waiting in a long line with his sons for $22 turkey legs at the carnival, Drake Tso from Ganado seemed not to mind.

“It hurts my wallet,” he chuckled. “But I’m really enjoying it – it’s great to be back. Everything’s coming back to normal.”

Taking a rest by the powwow area, Marcina Smith from Shonto said it was worth the long trip to come back to the fair, even though they missed the parade due to getting stuck in traffic.

“My favorite part is the jewelry stands,” she said. “It’s very busy – there’s long lines at all the food stands and all the rides too.”

Shawn and Latonia Begay from Flagstaff said the fair only comes around once a year, so they like to make the time and effort to experience it to the fullest.

“You want to show your kids what your parents did with you growing up and experience it with your family,” said Shawn Begay.

“I think they missed the whole experience and the whole vibe of getting together and sharing in the festivities,” he said.

Plus, being at an outdoor event makes everyone feel safer with Covid still around, said Begay.

“You’re not as nervous, you don’t feel claustrophobic wearing a mask all the time,” he said. “With the ease of being outdoors, you can enjoy the carnival, the powwow or the rodeo.”

Diadre Deswood from Chinle Valley Store said her mother and grandmother are the reasons why her family keeps coming back to the song and dance.

“There’s like three generations here – my mother, myself and my daughter,” she said.

It’s also about carrying on traditions, she said.

“It’s like a ritual thing, almost every fair season,” said Deswood. “We love to sing, we love to dance. This is always going to be a part of us.”

While most people at song and dance were still following CDC guidelines, it all seems more manageable at this stage, she said.

“There are some heartbreaks because some people aren’t here,” she said. “We sing for those who can’t dance.” 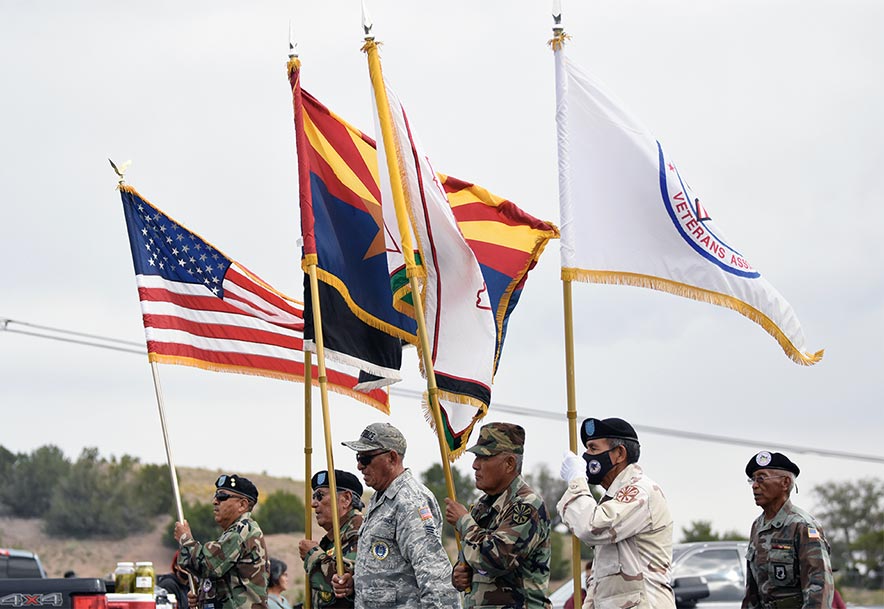 Special to the Times | Ravonelle Yazzie
Veterans with the Tsehootsooi Twin Warrior Society carry the flags at this year’s Navajo Nation Fair parade in Window Rock on Saturday.

“Coming back from two long years, I think that this year’s fair was absolutely a great one,” Fair Manager Leonard Francisco said on Tuesday.

“I think the majority of individuals did enjoy themselves,” he said, “despite some of the changes that had to be made.”

He said certain events like the Baby Contest, Fry Bread Contest, Elder Fest, and Cultural Night performances were canceled this year due to COVID-19 precautions.

“Other than that, everything went great,” he said. “I really appreciated all of the volunteers.”

Francisco estimated that about 75,000 people attended the fair in total, although that number could rise after final tallies are done.

Especially the live music concerts, rodeo events, parade and carnival brought in the big crowds this year, he said.

“It was a time to come together as a Nation and we stood strong, Navajo Nation strong,” he said.