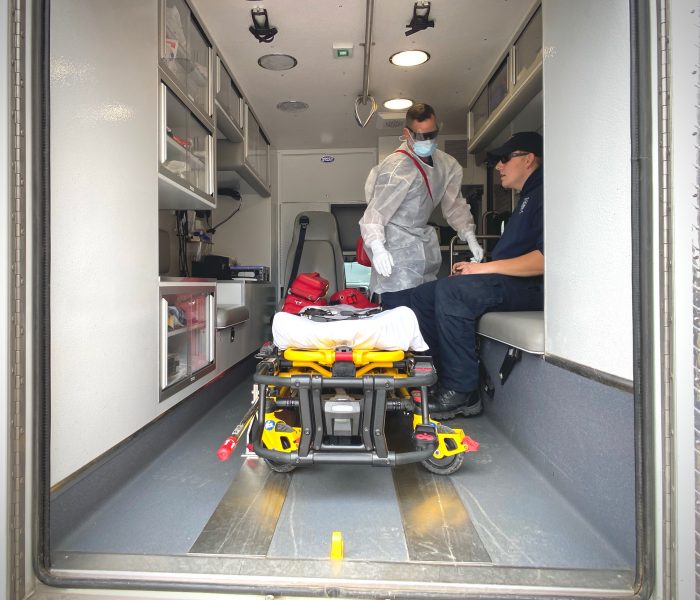 Navajo Times | Donovan Quintero
A paramedic with Gallup EMS conducts a training on how to work with patients suspected to have the coronavirus on March 12 in Gallup.

A first responder in Farmington has contracted the coronavirus.

Georgette M. Allen, spokesperson for the City of Farmington, in a news release, said a member of the Farmington Fire Department tested positive and was placed on a 14-day self-quarantine.

Allen said the FFD employee did not contract the virus while performing their duties. No other FFD employees or members of the public were exposed, according to a New Mexico Epidemiology Office investigation.

On Friday, Navajo Nation Police Chief Phillip Francisco revealed two of his police officers were quarantined for 14 days after being exposed to the highly contagious virus in Chilchinbeto.

The Gallup Police Department, on March 11, began purchasing Clorox bleach and spray bottles their police officers could use to maintain a clean and safe environment in their patrol vehicles.

On March 12, Gallup police, the Gallup Fire Department and emergency management personnel conducted a training on how to work with a person suspected to have COVID-19.

During the training, while transporting a firefighter playing the role of a sick patient to Gallup Indian Medical Center, the hospital called off the training to tend to an actual patient who was suspected to have the virus.

The patient, a healthcare worker, drove into the hospital parking lot that was turned into a “drive-through” testing area, and tested.

The Centers for Disease Control and Prevention recommends people keep a distance of six feet between one another, frequently wash their hands for 20 seconds, stay home when travel isn’t necessary, and not gather in groups of more than 10 people.