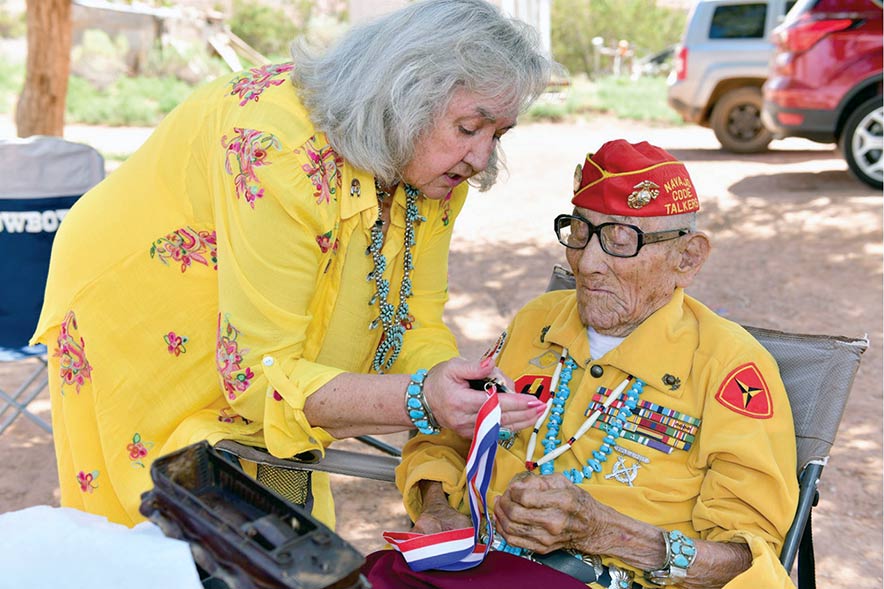 Special to the Times | Bazhnibah
Cecelia Sandoval, a U.S. Air Force veteran who traveled to New Orleans for the American Spirit Awards, shows the medallion to John Kinsel, Navajo Code Talker, at his home in Lukachukai, Ariz.

On June 10, four Navajo men were awarded the 2022 American Spirit Award and medallions.

The American Spirit Award recognizes individuals who best exemplify the outstanding qualities of the American spirit, including teamwork, optimism, courage and sacrifice, and who inspire the exploration and expression of these values through their life and work.

The code talkers played an essential role in transmitting sensitive information on battlefields leading to the end of the World War II.

During the war, the U.S. military employed Native American code talkers in theaters around the world and in the Pacific.

According to World War II Museum documents, Thomas Begay “played an essential role in the Battle of Iwo Jima, sending and receiving more that 800 messages without error.”

John Kinsel Sr. joined the Marine Corps at age 21. He was “assigned to the 9th Marine Regiment, 3rd Marine Division, and saw combat in Bougainville, Guam and Iwo Jima where he was wounded.”

Samuel Sandoval” enlisted at 21 and served in the South Pacific, seeing combat on Guadalcanal, Bougainville, Guam, Peleliu, and Okinawa.”

Peter MacDonald “enlisted in the Marine Corps at age 15 and trained alongside other code talkers at Camp Pendleton” and later served in the “South Pacific and China.”

Because Kinsel was not able to travel to New Orleans to receive these awards, the awards were given at his home in Lukachukai, Arizona, last week.

He was delighted to receive gifts from the World War II Museum.

Kinsel is 105 years old, according to his family.