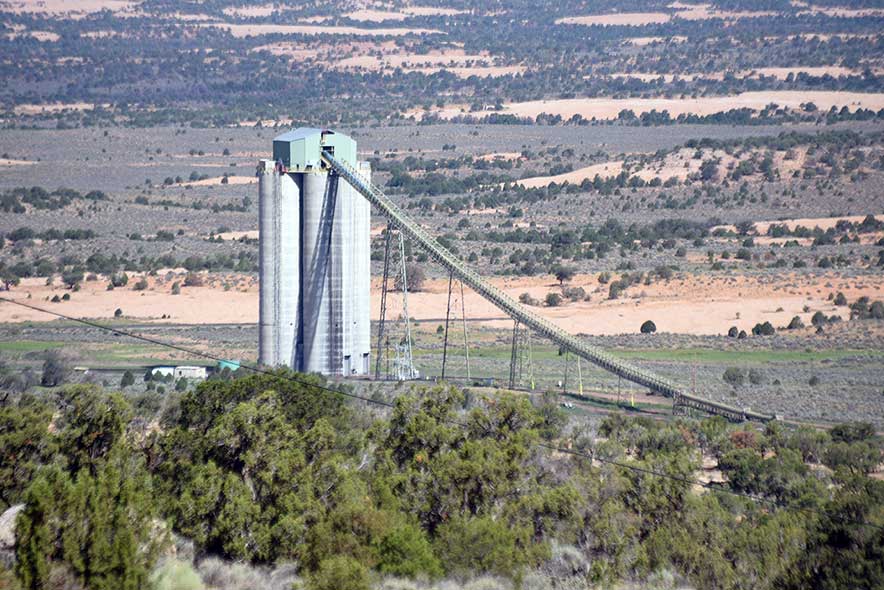 The green conveyor bridge between mileposts 373 and 374 south of Tódinéeshzhee’ was demolished a week ago on Wednesday morning.

The 17-mile conveyor, arcing over hilltops in Dziłyíjiin, transported crushed coal from the Black Mesa Mine – which straddles Diné and Kiis’áanii lands – to the storage silo in the Klethla Valley near Peabody Western Coal Company’s Kayenta Mine.

For 46 years, Black Mesa and Lake Powell locomotives hauled the coal in hopper cars 78 miles to the Navajo Generating Station in Łichíi’ii.

The BM&LP electric train’s last run was in late August 2019.

The coal was used to light up the Las Vegas Strip, Phoenix and Tucson. The power ran pumps along the Central Arizona Project canal, pushing Tooh Bikooh uphill across the state, allowing water for non-Native users.

Garin Groff, a spokesperson for the Arizona Department of Transportation, said the demolition happened last Wednesday morning and caused a short-term closure of U.S. Route 160.

“Everything was taken down, pushed to the shoulder, and then hauled away,” Groff said. “It took about one hour.”

Delegate Herman M. Daniels Jr. said the conveyor belt – and the storage silo – was established within the Shonto Chapter boundary.

The storage silo was not demolished because Shonto officials and residents wanted to turn it into a tall restaurant. But they also have some other ideas.

“(Members) of the Shonto Community Governance said they want to put a restaurant at the top,” Daniels said.

The restaurant would most likely be the only tall restaurant in the region and would offer views of Naatsis’áán, Shą́ą́’tóhí, Dziłyíjiin, and Grand Staircase-Escalante.

“They want to pursue that,” Daniels said. “The silo is within Shonto Chapter.”

Peabody Energy representatives did not respond to calls or emails seeking comments and details.