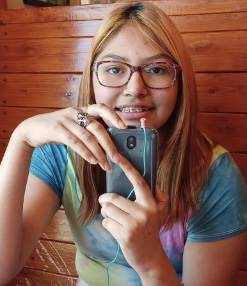 Marissa Jones had just gotten back from grocery shopping and was starting dinner for her family Sunday when her 13-year-old daughter, Lyssa Rose Upshaw, asked if she had time to go for a walk on the jogging trail over a hill from the family’s home in Fort Defiance.

Those were her last words to Lyssa.

Jones was frying up some vegetables when she looked at the clock. It was 5:45. She started to worry and sent her son out to look for Lyssa.

He didn’t see her footprints on the trail, and started to search a nearby wash.

When there was still no sign by 6, Jones enlisted her sister and cousins, all of whom live nearby, to join in the search.

Jones was looking around the bridge by That’s-a-Burger when she got a call from her son, Lyssa’s brother.

“He said, ‘Mom, you need to get over here,’” she recalled. “That’s when I knew something was wrong.”

On her way back to her house, Jones saw some people gathered near her cousin’s home at the top of the hill.

As Jones and her sister started down the hill from the house, to where someone said she would find Lyssa, the dogs came at them, snapping at their legs and arms.

Jones says she was bitten on her arm.

“We had to sort of sit down and scoot down the hill” so the dogs wouldn’t come around behind them and bite their legs, she said.

It wasn’t long before they found Lyssa. She was curled up in a fetal position, her clothes and pieces of flesh scattered around.

“Her legs were all chewed up,” Jones recalled. “She was gone.”

When police came on the scene, the dogs went after them too, according to Jones.

Animal Control was called, but by the time they came, the family had hidden the dogs, she said.

Eventually 12 dogs were found in a locked building on the property and taken into custody as evidence, Jones said.

“They had to check them for blood, hair, anything that might be caught in their teeth or on their coat,” she explained.

She believes there are more dogs Animal Control didn’t find because the family managed to hide them.

Fort Defiance Animal Control officers said they couldn’t confirm that or comment on the case, and the criminal investigator assigned to the case didn’t return a phone call.

Jones said Lyssa’s remains were sent to Flagstaff for an autopsy.

Navajo Nation Police public information officer Christina Tsosie issued a statement urging the news media to “avoid speculation” about the cause of death.

But Jones has no doubt the dog pack mauled her daughter to death.

“Those dogs killed my baby girl,” she said through tears. “This wasn’t supposed to happen.”

According to Jones, the dogs have bitten or snapped at many people, once cornering her niece against a rock until the owners happened to come by and call them off.

“Everybody knows those dogs are mean,” she said.

A quiet, artistic girl who was always carrying her sketch pad around, Lyssa had planned to spend this week getting ready for her promotion from Tséhootsooí Middle School.

“She wanted to get her nails done, her eyebrows done, dye her hair,” her mother said. “She was so looking forward to going to high school next year, and being with her brother, who’s going to be a senior.”

Now the family will be planning a funeral instead of a promotion party.

Jones said the Nation has good animal control laws, but needs to enforce them more consistently.

“They need to go from house to house and see how many dogs people have,” she said. “When I was in NHA housing, I just had one pit bull and they made me get rid of it. But when you live off by yourself, people have seven, 10, 12 dogs and nobody says anything.”

If Lyssa’s death is confirmed to be a result of predation, she will be the fifth person killed by dogs on the Navajo Nation since 2010. The victims include a 56-year-old man near Gallup in 2010, an 8-year-old boy in Pine Hill, New Mexico, in 2012, a 3-year-old boy in Seba Dalkai, Arizona, in 2016, and a Kayenta woman last fall.

The Navajo Nation has five animal control officers and an estimated 250,000 free-ranging dogs.