It’s a go: Wild Thing set to return in July

Swirls of emotions hit Wild Thing promoter Larry Peterson when he got word that his iconic event had to be canceled over concerns of the pandemic last spring.

His show was going to be his 28th event but he had to pull the plug when the state put tighter restrictions on mass gatherings as a way to mitigate the spread of the highly contagious COVID-19 virus.

“It was terrible and it broke my heart,” Peterson said. “It made me sad, and it made me sick. It was just rough on everybody … I couldn’t help the Manuelito Children’s Home and that’s what I do.” 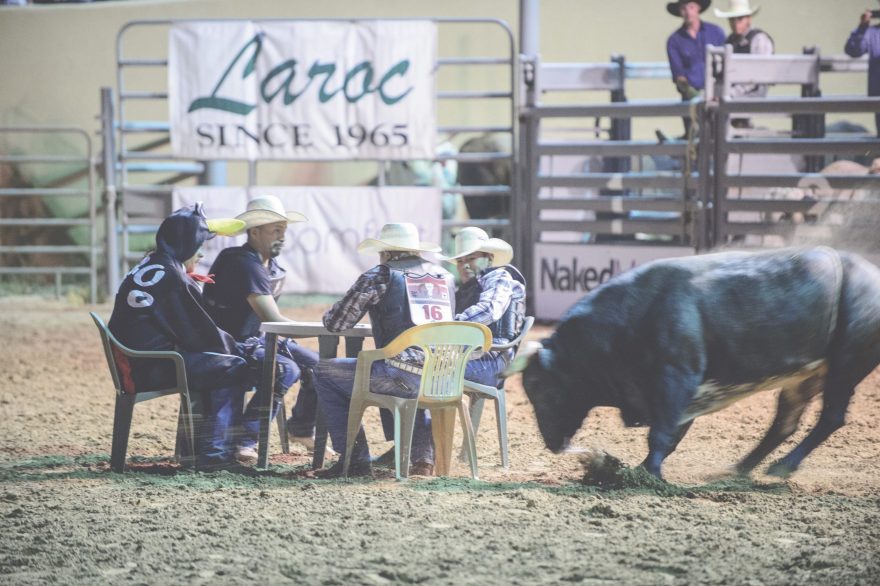 File photo
A bull charges the poker table during the 2017 Wild Thing Championship Bullriding in this file photo. The 2021 event is scheduled for July 9 to 10 at Red Rock Park.

Thanks to the high percentage of New Mexicans getting vaccinated, Peterson got the go-ahead to host this year’s event, which is scheduled for July 9 to 10 at Red Rock Park.

And if the vaccination rate hits 60 percent or above, the event will have no restrictions in terms of capacity limits.

As of Thursday, the New Mexico Department of Health stated that 52.2 percent of New Mexicans are fully vaccinated and 63 percent have at least one dose.

“If we stay in turquoise (the second-best rating in New Mexico’s color-coded COVID risk system) we could do the 75-percent thing,” Peterson said. “But if looks like for sure that New Mexico is going to hit that 60 percent vaccination number in a few weeks then everything will be wide open.”

Peterson said it will be up to individuals if they would like to wear a mask as New Mexico governor Michelle Lujan-Grisham relaxed the mask-wearing protocols last week.

Per the governor, fully vaccinated people don’t have to wear a mask.

“Things are finally going in the right direction,” Peterson said. “I think we’re going to be fine and I don’t think we have to do the 75 percent. I think we’re gonna be able to go 100 percent.”

The Wild Thing promoter said his show in July will be the first event that Red Rock Park has had in the past two years as the pandemic canceled all events last year.

“We haven’t posted or done much but when we found out that we get to have it we ran a nice little video on Facebook,” Peterson said.

Since they released that video two weeks ago, it has been shared 319 times and viewed 20,000 times.

“People seem to be really excited that Wild Thing is gonna happen,” Peterson said. “We’re trying to wake the Wild Thing fans up and, you know, they jumped all over it. They went nuts and tons of people said they’re happy that it’s coming back.”

Peterson said more information will be forthcoming as early as June and for the time being he’s getting prepared for an event that includes music, wooly riding, fireworks and cowboy poker.

“It’s really hard to get things back up and running but we’re going to stick our chest out and do everything we can,” he said. “What makes me proud is when I see that crowd laughing and enjoying themselves. You know everybody has something favorite they love.

“Some love my championship wooly riders and I get comments on that. Some think my announcer is the best thing they’ve ever heard and they comment on that,” he added. “A lot of people go nuts over my fireworks. They love the way that skull lights up and others go crazy and love the cowboy poker. Of course, it’s always a good bull riding, with the caliber of bulls that we bring in.”