Homeless in border town getting by, livin’ 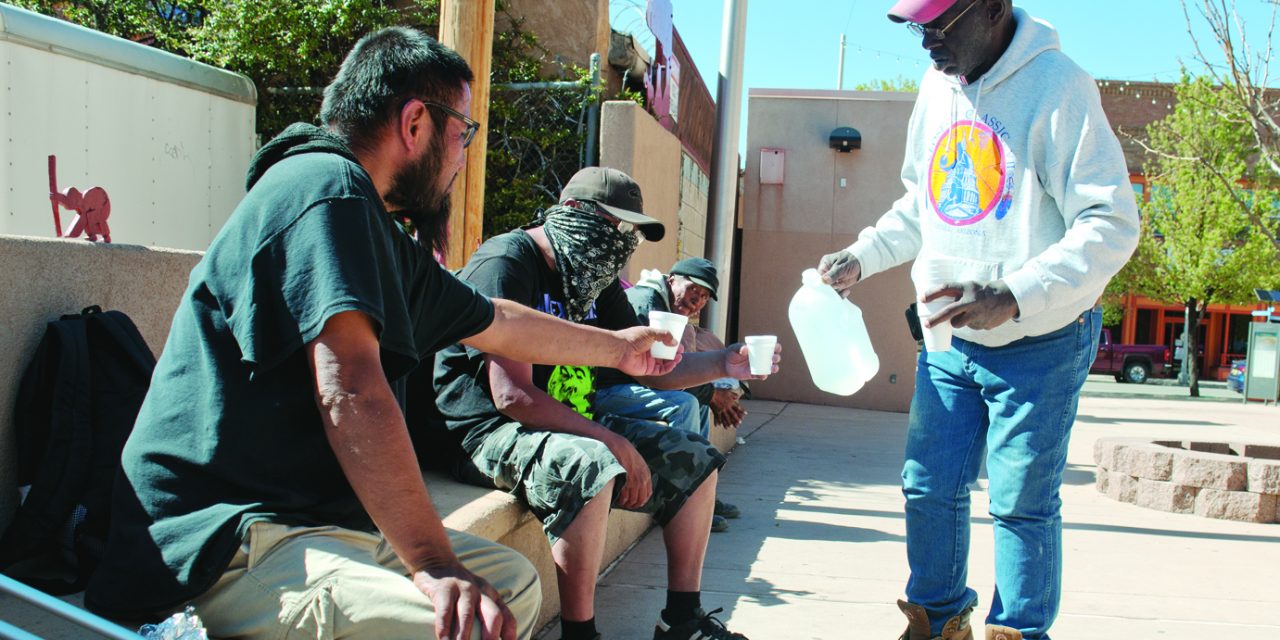 She didn’t hesitate to give what she could give.

Shylah Pettigrew knows all too well what it feels like to be hungry and thirsty.

Her years of living on the streets, as well as the teachings of her mother, taught her to be compassionate, she said.

“You can’t pass somebody by without offering,” she said.

The Lupton, Arizona, native saw her cousin and several other people sitting outside where she was attending a birthday party.

The people, whom the city of Gallup categorizes as transients, or homeless, sat on the concrete bench enjoying the warm Saturday afternoon sunlight in downtown Gallup.

Pettigrew brought out plates of food and some water to the people she refers to as her “street family.”

Her cousin, Shawn Arthur, said he was thankful for the food.

“When you give somebody a soda or a sandwich, you can see the joy in (his or her) eyes,” Arthur said, who is also from Lupton.

Arthur said his family told him he could not go home until the coronavirus pandemic was over. He thought they were joking around until he tried going home one day, he said.

“I tried going back,” he said. “They told me, ‘Nope, you stay in Gallup.’ They said, ‘You stay there until this thing is over with.

“They dropped off my clothes,” he said, “and I carry it around now.”

The street life Pettigrew’s cousin was living is a life she once lived. While the streets offered freedom, they also offer hardships.

Hunger, thirst, a place to sleep, where to use the restroom and maintaining hygiene were some of the hardships.

“Nobody’s perfect, everybody suffers from an addiction,” Pettigrew said. “Nobody’s better than one another.

The heavily tattooed Pettigrew said there was no room for self-pity on the streets.

“Don’t wait for somebody to bring it to you,” she said. “I have to get the point through because you gotta’ do it for yourself. You can’t just sit there all day and let the day pass you by without doing something for yourself.

“If you don’t have a place, build a little hut,” she said. “You can’t sit there and make people feel sorry for you. Especially when this crisis is going on.”

With the pandemic raging in the heart of Arthur’s and Ray-Ray’s hometown, the spotlight, they say, that’s painted them as the being the root cause of the sudden spike in the number of confirmed COVID-19 cases was unfair.

An incident at the Gallup Detox Center, where intoxicated transients unable to care for themselves are taken to, occurred in the first weekend of April.

A man, infected with the virus, was possibly exposed more than 150 other people at the detox center. Since then, the number of confirmed cases in McKinley County skyrocketed from 70 cases, on April 8, to 820 cases, according to the New Mexico Department of Health.

“They think we’re infected,” Arthur said, referring to his family. “We can’t go home because they don’t want us home. They think I might expose them to it. Which might be true, but I got tested already. We’re not carrying the influenza, or whatever it’s called.”

Arthur showed a piece of paper from the Rehoboth McKinley Christian Hospital that stated he was tested for the virus, which, he said, came back negative.

“If you don’t get tested they take you to a hospital and take you a motel and stay there for three days,” he said, as another transient coughed nearby. “For what, you know?”

Since the outbreak, 130 people, according to Rehoboth McKinley Christian Hospital spokesperson Ina Burmeister, were currently being housed at one of the hotels in Gallup.

Both RMCH and Gallup Indian Medical Center were testing the homeless population and then sending them to a hotel room where they waited for test results.

“They stay there until cleared,” Burmeister said on Tuesday.

Neither hospital could force people to stay in the hotels, she added, but most of the people they tested complied and agreed to stay at the hotels and wait for their results.

Capt. Erin Toadlena-Pablo with the Gallup Police said the department’s public service officers only responded to complaints called in by the public.

“We are not looking for people to be tested,” she said on Tuesday. “Nothing has changed as far as our standard operation of procedures.”

Would hurt to lose one 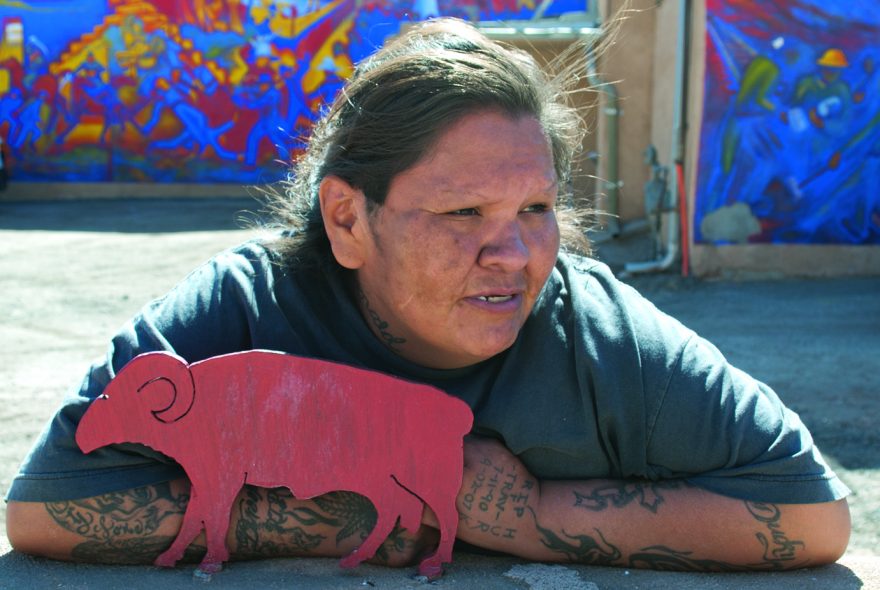 Navajo Times | Donovan Quintero
Shylah Pettigrew from Lupton, Ariz., speaks about her upbringing and how to treat people on April 25 in Gallup.

Pettigrew spoke with her cousin and the other people as they ate the food she gave them.

“You’ve been around them for a couple of years,” she said. “Nobody has a place to get something to eat. There’s really nowhere to turn and it bugs me, you know? That people are quick to judge, to see somebody who’s gonna sit right here.”

“It’s self-morals, self-respect, you know? It’s just who I am. Just to see the reaction on people’s face when you offer them to get them something to eat regardless of this disease that’s going around. It’s just taking care of one another. Just to survive,” she said.

Arthur and Ray-Ray finished their sandwiches and thanked Pettigrew. It was time to head back to their camp, they said, the location of which they wouldn’t divulge.

“We need supplies out here, man,” Arthur said. “Open the public restrooms back open too.”