Gallup lockdown extension granted, to remain in effect until Thursday 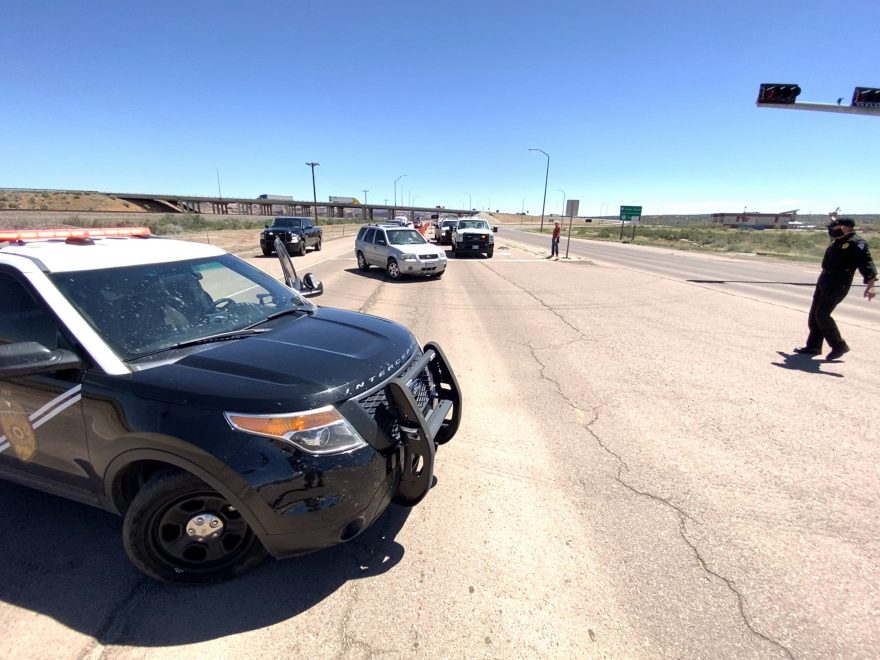 Navajo Times | Donovan Quintero
Lt. Shawn Martin with New Mexico State Police gestures to a vehicle which way to go after it was found the driver was not an essential worker or a Gallup resident on Friday in east Gallup.

A request asking New Mexico Gov. Michelle Lujan Grisham from newly sworn-in Gallup Mayor Louis Bonaguidi to extend an emergency lockdown that has been in place since Friday has been granted.

The lockdown, according to Capt. Erin Toadlena-Pablo with the Gallup Police Department, will remain in effect until Thursday at 12 p.m. The lockdown was granted when outgoing mayor Jack McKinney requested emergency help from the state in an effort to prevent the spread of the coronavirus, which has been steadily been climbing.

The letter, dated May 3, was not changed much from the letter McKinney wrote to Grisham.

“I respectfully ask that you extend of state of emergency pursuant within the boundaries of the City of Gallup,” the letter by the new mayor read. “The request is being made as a result of the COVID-19 outbreak in our community.”

As of Sunday, 1,144 people in McKinley County have been confirmed to have contracted the coronavirus, according to the New Mexico Department of Health. Twenty-one people have died.

New Mexico State Police spokesman Dusty Francisco said the state police had not yet received any notification from the governor’s office.

“For us, the checkpoints and blockades end at noon tomorrow (Monday),” Francisco said prior to the governor’s approval to extend the lockdown.

He added state police, along with the Gallup Police Department and the McKinley County Sheriff’s Office would be manning the various checkpoints currently in place.

“We’re going to continue what we’re doing,” he said prior to the approval.

The closure of Gallup came at the first of the month, a time when many Navajo people went to the city to take care of essential needs like grocery shopping, washing clothes, and getting hay and feed for their livestock. Navajos who conduct business in Gallup will have to wait or go elsewhere if the extension is granted.

Francisco said the checkpoints and blockades currently manned by state police will be guarded by police officers from two city, McKinley County deputies and the New Mexico Department of Transportation.

“Effective at 6 p.m. today (Sunday), McKinley County, the Gallup Police Department and New Mexico State Police are going to to be manning different areas of the checkpoints,” Francisco said. “I-40, Exit 22, eastbound and westbound ramps are closed by New Mexico Department of Transportation. There are no entrance and exits there.”

Francisco said Sanostee Drive, which serves a frontage road for the Mentmore housing area in west Gallup, will also be closed.

McKinley County Sheriff’s Office Undersheriff James Maiorano III said on Sunday, county deputies would be manning the checkpoint at State Highway 118 and Twin Buttes on the westside of Gallup, along with the New Mexico National Guard. “we’re gonna try to treat everyone with respect. We are going to get through this together as a community.

Maiorano added in his 20 years in law enforcement, he’s never experienced anything like this.

“Its all new. We’re all learning together, we’re all trying to work as well together as we can and still keep our community intact and our businesses alive and thriving,” he said. “It’s complicated”

Essential employees will be allowed to drive in the city, as well as Gallup residents with proof of residency, on Monday even with the lockdown in place, Francisco said.

“Continued action is necessary. Only through the extension of the invocation of your authority under the Riot Control Act can our community impose the measures necessary to stem transmission of COVID-19,” Bonaguidi wrote.

The new Gallup mayor also requested the hours Gallup businesses are allowed to operate be extended from 8 a.m. to 5 p.m., to 8 a.m. to 8 p.m.