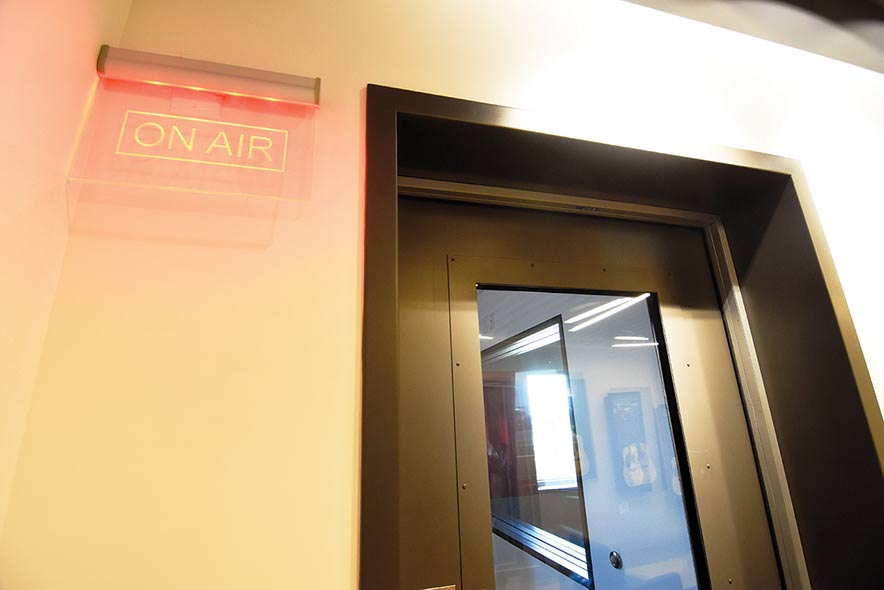 Navajo Times | Donovan Quintero An “On Air” neon sign is lit in this March 5, 2017, photo at the KTNN building in St. Micheals.

Well-known radio personality Dee Yazzie loves her job. She loves speaking her language every day. She loves radio and she loves her community.

In the early days, she didn’t even mind the hour-and-a-half-long drive from her home in Dilkon, Arizona, to the KTNN radio station every morning because she loved going to work.
But that love has been replaced with anguish.

“We would like to look forward to coming to work again,” Yazzie said. “Being happy, a good environment, a home away from home.”

Currently, that is not the case for KTNN’s on-air talent, whose voices people hear as they herd sheep, haul wood and go about their days.

For years, Yazzie was a barrier between KTNN/KWRK General Manager Troy Little and the other on-air talent. Yazzie said she often took the brunt of Little’s bad temper and unprofessional attitude.

There was one moment that she remembers to this day. Yazzie had to take over doing the news because KTNN got rid of their news department. Like any radio host or reporter, Yazzie went to ask for clarification on a word in her script. She decided to talk with Little about it.

Yazzie isn’t the only employee that Little would disparage.

Juelina Livingston left KTNN in August because of the way Little was berating her about her on-air performance. He harshly criticized her and made her feel insecure, she said.
“It really hurt me,” she said.

Why did Little blow up at Livingston? Well, she misspoke and said $5,000 in prize money instead of $500 during a rodeo announcement. She immediately apologized and corrected herself twice on air.

Yazzie remembers Livingston telling her about what happened.

“She was so humiliated,” Yazzie said. “She didn’t want to come back.”

And Livingston didn’t come back to KTNN. She quit her job because of the way Little treated her.

This is just a recent incident but the issues between KTNN on-air talent and Little have been going on since 2013.

“He threatened me one day saying that if we weren’t doing what we’re told to do that maybe I should hold your paychecks as well,” Yazzie said. “(Little) said that to me and here that following payday we didn’t get paid and we walked out that afternoon.”

A previous board member for KTNN had to step in and demand that Little cut checks for the KTNN staffers that same day. By 3 p.m. that day they were paid.

On Feb. 2, 2017, an internal memo was sent to Little from Bob Sandoval, known as “Navajo Bob” to KTNN listeners.

The 2017 memo addressed six key issues: “solicitation or acceptance of bribes or kickbacks,” “abuse of office or position,” “endangering the physical well-being of any individual, including but not limited to, threats or actual violence,” “mistreatment of any individual(s) which jeopardizes health and safety,” “creating discord among fellow employees leading to decreased productivity or a hostile working environment,” and “failure to treat the public or fellow employees with courtesy.”

Four days later, on Feb. 6, 2017, Sandoval, who was selected as the spokesperson for the group, formally requested an “administrative resolvement meeting” with Little.
“We talked but nothing came out of it on February 6th,” Sandoval said.

The issues persisted and Sandoval claims he was retaliated against by Little.

In 2017, during the basketball season, Sandoval was told he would no longer be covering high school basketball for KTNN.

“We used to do sports but because of these allegations that I brought, there was a retaliation against us saying that you will no longer do high school basketball,” Sandoval said.

For a couple years, things quieted down and the KTNN staff didn’t bring up the allegations internally again until August 2019. This is when Dee Yazzie went on medical leave.

For the past couple of years, Yazzie has been the acting lead on-air talent. This is a pseudo-supervisor position, as Yazzie creates the schedules and communicates information from the station administration to KTNN staff. However, Yazzie doesn’t have any authority in her role.

Yazzie’s absence left Sandoval, Dan Arnold and Lee Moffitt to deal with Little’s sometimes irate behavior. Prior to Yazzie’s departure, she said, she was a shield between Little and the other KTNN staff. Yazzie said Little’s remarks would stop at her, so the other employees didn’t have to deal with it.

Now, Sandoval, Arnold and Moffitt were left to deal with Little. So, they sent a letter to Little on Aug. 25, 2019, addressing their concerns once again.

The five-page letter detailed all their concerns including favoritism. There is a huge difference in how KTNN and KWRK staff get treated at Native Broadcast Enterprise, according to KTNN staff.
“But then with his favorites, they were constantly – KWRK – just laughing and giggling in the studio all afternoon long,” Moffitt said. “He’ll go in there and laugh with them, walk out and nothing.

“I’ll barely walk in the KTNN studio to talk to (Yazzie) about something and he sees us in there and he’ll storm in there, and find out what we’re doing and then make a comment about how we should be working instead of just gossiping,” he said.

The favoritism mixed with unprofessional behavior from Little forced Sandoval to once again push for change, he said.

Sandoval and the rest of the KTNN air talent didn’t know what else they could do. So Sandoval went before the Resources and Development Committee on Oct. 30 to report the working conditions at KTNN.

Once again, nothing was done Sandoval said.

“If the environment is not healthy, is not safe, if it’s intimidation, then who do you report to?” Sandoval asked. “Who can resolve this issue? We’ve tried it internally. We’ve tried it with our leaders. Nothing was done. So where does that leave us? Who is going to listen to us to resolve these problems that exist within KTNN?”

This is where the group is at now, wondering how they can once again have a “home away from home.”

Little responded to these allegations via a letter emailed to the Navajo Times.

It states, “KTNN is operating smoothly and is disappointed to hear that someone has made allegations about working conditions. KTNN strives to provide a fair and positive working environment for all its employees and denies that there are any hazardous working conditions or favoritism.

“To the extent any of our employees have issues with their employment they need to follow KTNN policies which are contained in its employee handbook or follow the process provided by Navajo way to resolve these issues which has not occurred.”

Since 2017, he said, Sandoval has sent Little seven documents addressing the grievances about hostile working conditions. The group also took their allegations to the board.

Still the group was ignored, he said.

This happened a few years ago and since then the radio station’s administration has allegedly withheld the date, time and location of board meetings from the KTNN staff.

KTNN staff would like to see a new general manager hired and a new board appointed.

“You got to start from the top,” Sandoval said. “I think that’s the only way everything’s going to be back in its place because they’re not addressing the problem.”