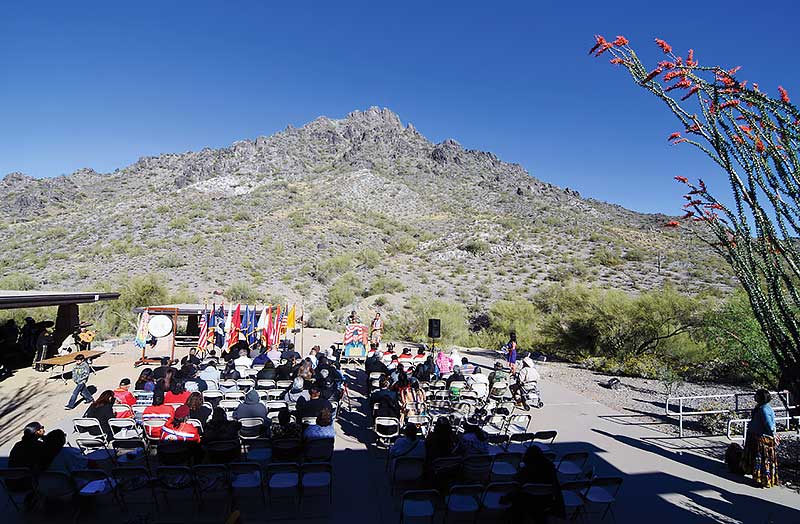 A letter to the new owners of Pointe Hilton Squaw Peak Resort in Phoenix asks them to change its name to the “Lori Piestewa” resort.

On Sunday, Arizona State Rep. Arlando S. Teller, D-Chinle, said the word ”squaw” is a derogatory word used to describe Native American women and is offensive and should not be used in the state of Arizona.

”The term ‘squaw’ is a pejorative slur directed at Indigenous women and girls,” the letter states. “This term espouses sexualization and is ruthlessly offensive to the Indigenous peoples of Arizona and the United States.

Navajo Times | Donovan Quintero
A clear blue sky provides the backdrop behind Piestewa Peak during the Sunrise Service in March 2016 in Phoenix to honor Lori Piestewa.

“We write to you as members of the Arizona State Legislature to dutifully request that the name of this property be changed,” the Aug. 29 letter states. “The surrounding mountain preserve, freeway and other nearby properties, beginning in 2003, have changed their name to ‘Piestewa Peak.’”

The letter asks the firm to name the resort after U.S. Army Spec. Lori Piestewa, from Tuba City, who died on March 23, 2003, during Operation Iraqi Freedom.

Piestewa, 23, and other members of the 507th Maintenance Company were ambushed near Nasiriyah, Iraq, and nine soldiers were killed in action.

Teller said he mailed the letter, which was signed by 17 fellow members of the Democratic Caucus of the Arizona House, on Friday to Fortress Investment Group, based in New York City.

“The Indigenous community believes the continued usage of ‘squaw’ has a correlation to the epidemic of Missing and Murdered Indigenous Women and Girls,” the letter stated.

According to the resort’s website, the resort includes 224 beds, is 48,000 square feet and located on 27 acres.