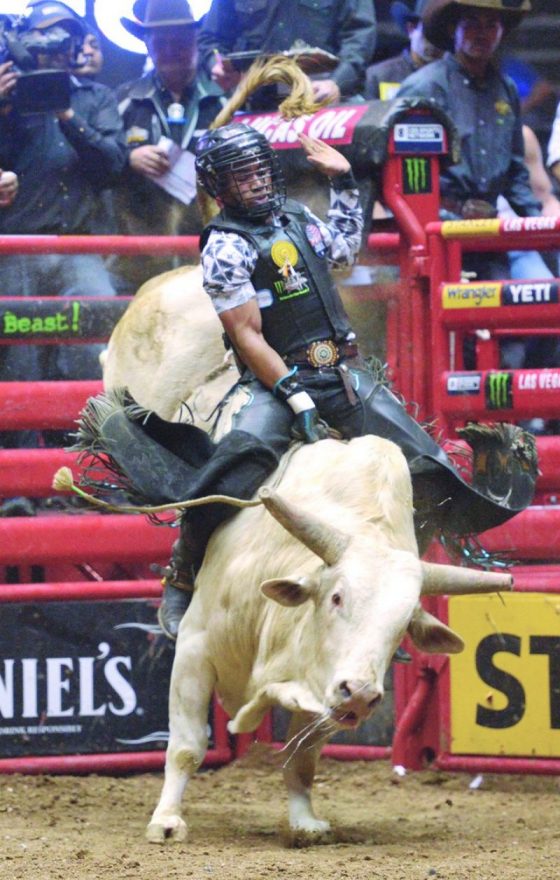 File photo
In this file photo, Keyshawn Whitehorse tries to stay on his bull at last year’s Ty Murray Invitational. Whitehorse is scheduled to ride in Wednesday night’s PBR’s Buckin on the Rez event at the Dean C. Jackson Memorial Arena.

The 2018 PBR season shaped up to be a gratifying year for Diné bull rider Keyshawn Whitehorse.

The McCracken Springs, Utah, cowboy earned the coveted PBR Rookie of the Year award after turning in an 89.5-ride on the final day of the 2018 PBR World Finals.

Whitehorse finished the season 19th in the world and held off Colten Jesse by 128.33 points to win the rookie-of-the-year title.

“I always wear that buckle proudly,” Whitehorse said. “It means a lot to have won that title.”

And while the title recognized his exploits for the 2018 season, Whitehorse said it encompasses more than that.

“It covers the time I spent with my dad training, with him pushing me,” Whitehorse said. “It covers all the prayers I’ve had and all the support from my family, friends and fans.”

He said winning that title also covers the different hardships he’s endured over the years in trying to make a name for himself in the PBR ranks.

After winning his title, Whitehorse said he received some sound advice from his dad. And although he was very proud of his son, the elder Whitehorse reminded his son that his exploits would only become a “good memory.”

“He told me as soon as the sun comes up the next day, it’s going to be a good memory,” Whitehorse said.

Whitehorse is scheduled to ride in tonight’s PBR’s Buckin on the Rez, which is presented by the Navajo Nation Department of Agriculture at Dean C. Jackson Memorial Arena.

According to the PBR, 20 of the top 35 riders in the world are also set to compete including Chase Outlaw, Jose Vitor Leme, Joao Ricardo Vieira and Cody Teel.

The top 15 scorers from round one will get on another bull with the highest combined score from the two rounds being declared the event champion.

In addition to Whitehorse, fellow Diné Cody Jesus will be there to defend his title.

At last year’s event, Jesus rode a pair of 90-point rides to win the inaugural event.

“Oh, man, this means a bunch,” Jesus told the Navajo Times at the time. “I mean when you score a 90-point ride at a PBR, it’s well deserved.”

Jesus is currently ranked No. 13 in the world while Whitehorse is holding down the No. 29 spot.

Whitehorse said he’s excited about competing in the event and he’s looking forward to seeing all of his Diné supporters.

“Their support helps me push on and it keeps me going,” he said. “I’m very thankful for the great fans that I have.”