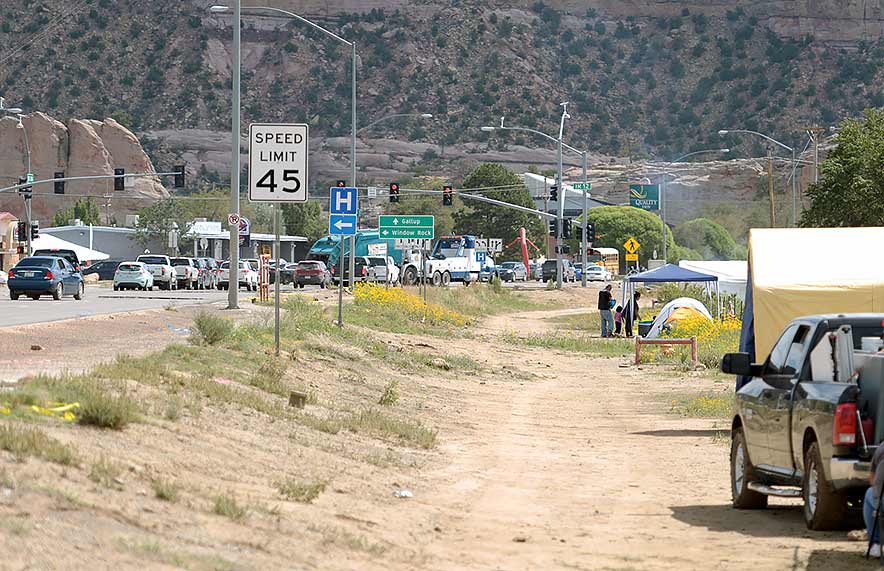 Navajo Times | Donovan Quintero
The south side of State Highway 264 in Window Rock is relatively bare in this photo taken on Wednesday, Sept. 5, 2018, before crowds arrive for the weekend at the Navajo Nation Fair and parade.

If Navajo Nation Fair officials get their way, the spaces along State Highway 264, from the port of entry to just west of the Window Rock Civic Center, will be empty of campers and burrito sellers.

While the Nez-Lizer administration has largely been quiet about it, except for prohibiting candy throwing by parade participants, they have given Navajo Parks & Rec a directive to keep the right-of-way clear of obstructions, like tents and vehicles.

To ensure the peace is kept, the Navajo Nation Police will help fair officials keep the sidewalks clear.

Timothy Begay Jr., the Navajo Nation Fair parade coordinator, said the fair, along with Navajo Department of Transportation and Navajo police, were planning to ensure the sidewalks remain clear.

“We are thinking maybe Thursday, we will be going down the road and if we see stakes, we will be pulling them out,” Begay said. “We will probably do it again on Friday, but we will see how things come out.”

Begay said every year the fair applies for a permit to hold the annual parade that attracts tens of thousands of fairgoers since the fair started in 1946. When the first fair was held, Highway 264 was only a gravel road and not recognized as a state highway.

According to the Rand McNally road atlas, the road was not completely paved until 1961. The highway, which starts in Ya-Ta-Hey, N.M., and ends in Tuba City, is more than 154 miles long.

Fast forward to 2019 and Begay said since the tribe is required to get a permit to have a parade on state property, they are also responsible to ensure public safety.

“ADOT does not want anyone to be camping along the side of the highway, or parking along the highway, I guess for liability reasons,” Begay said. “That’s probably the main issue.”
He added that this doesn’t mean they didn’t want to public to come out and enjoy the fair and parade.

“We’re not discouraging people to not come out,” he said. ‘It’s that we’re just to follow what ADOT wants, because they’re the ones that gave us the permission to use their road, because that’s their road.”

Navajo Police said they would only be helping to keep people from blocking the sidewalks. If they see anything impeding, they will enforce the law.

Lt. Terry John with the Window Rock Police District said speed limit during the parade will also be enforced and be kept under 25 mph.

Bernice Begay, who lives across from the fairgrounds, said she and her family had a bigger concern: lack of portable toilets.

Begay was preparing an area for food vendors to set up their booths last Tuesday morning. She and her family said they would be able to accommodate about 180 vehicles. For a fee, of course: $5 per vehicle.

However, Begay added people also need to use the restroom.

“We invite all these people to come to our fair and parade, but it’s like ‘bring your own toilet,’” she said. “I wish they would put two toilets along the parade route.”

Agriculture Department Manager Leo Watchman assured the Times there would be toilets along the parade route Saturday.

Begay recalled one incident about six years ago when they caught a woman urinating outside their bedroom window.