Diné are turning their hogans into cash on Airbnb

You can almost count all the motels on the Navajo Nation on two hands. But that doesn’t mean there’s nowhere to stay. 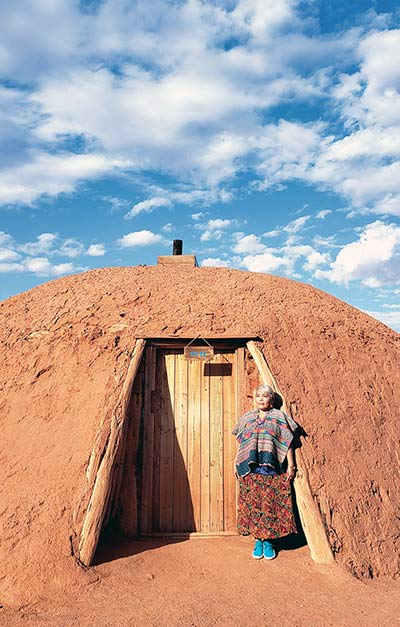 Courtesy photo | Verna Yazzie
Verna Yazzie shows off one of the three hogans she rents out on Airbnb at her home in Monument Valley.

Enterprising Diné from Shiprock to Coppermine are opening up their homes, sheep camps and hogans to curious tourists hoping to get a glimpse of real Navajo life — and doing quite well, thank you.

While a few entrepreneurial Navajos have been hosting tourists since John Wayne days, the underground tourism economy has exploded in the last decade with the advent of Airbnb, Vacation Rentals by Owner and other online companies that advertise the properties and act as a go-between for hosts and guests.

On Airbnb alone, more than 50 sites are listed on the reservation, with surprising variety. You can stay in a room in a family home, “glamp” (upscale camping) in a canvas tent with a real bed and solar lights, experience real Navajo life in a dirt-floor hogan or a sheepherder’s trailer (and in some cases, even help herd sheep). You can pay anywhere from $20 for a room with a shared bathroom to $140 for a luxury off-grid cabin. And people are.

“We’ve been extremely successful,” said Baya Meehan, owner of possibly the reservation’s most elaborate bed and breakfast, Shash Diné Eco-Retreat in Coppermine, Arizona. “We’re selling out the summer as we speak.”

Meehan had a good job off the reservation, but after marrying and starting a family, she wanted off the treadmill. She and her husband tapped into the Grand Canyon Trust’s Native American Business Incubator Program to learn how to start a business. “I can’t say enough about the folks at the Grand Canyon Trust,” she said. “They’ve been really great. Also the Western Agency RBDO (Regional Business Development Office) was helpful.”

Shash Diné has a variety of rooms, from tents to a cabin, and their latest, “The Kyoob,” which will open this spring. “Picture a nice hotel room cut out and dropped in the middle of beautiful scenery,” explained Meehan.

Verna Yazzie of Monument Valley had no mentors and didn’t even know what Airbnb was when she started hers in 2016. “I was complaining to a friend in Pennsylvania about how I couldn’t find a job here, and she said, ‘Your property is so unique. Why don’t you list it on Airbnb?’”

After Googling Airbnb and discovering what it was — an international online listing company that charges a small percentage from both host and guest — Yazzie asked her mother if she could fix up and rent out three small hogans on the family home site. She called her new rental “Monet Valley” (pronounced “Monnett”), because that’s how her Navajo-speaking grandmother said “Monument Valley.”

“The first month (February) was pretty slow, and then by March I was getting reservations every hour,” Yazzie recalled. “It was kind of scary.” Now she’s making a living for herself and her two children, who chop the vegetables for the Navajo tacos every guest gets for dinner the first night, and wash the linens. “They earn their money,” she laughed.

A quick scan of Airbnbs on Navajo shows the same story. Although this is a slow time of year, most of them are already starting to book up for the spring and summer.

The secret to a successful Airbnb is good reviews from guests, and the Navajo properties generally get between four and five stars. The hosts are also highly rated, with a number having earned the company’s “superhost” status — which requires, among other things, that 80 percent of your guests give you the maximum five stars. And some of the highest-rated — not to mention most expensive — properties are the ones with the fewest amenities.

“For the tourists, the more rustic the better,” noted Yazzie. “My hogans don’t even have electricity or running water. They (guests) have to walk to the outhouse, but they don’t complain. It’s a new experience for them.”

Like many Airbnb hosts, Debra Yazzie of Shiprock (no relation to Verna) started out as an Airbnb guest.

“I usually search for hosts before I book through a major hotel chain,” she said.

Two years ago, she decided to try hosting and found it surprisingly easy to get started. She set up a PayPal, Venmo and Google Pay account to give her guests some options. “It took me about an hour to fill in all the basic information and upload a few pictures” on the Airbnb site, she said, and she was in business.

Because she always enjoyed learning about her hosts as an Airbnb guest, she personalized each of the three bedrooms she rents out in her home. The Rez Ball Room has books and posters about basketball and “an ancient trophy” from her days as a standout for the Window Rock Fighting Scouts.

The Code Talker Room has World War II memorabilia to honor her late grandfather, Code Talker Justin B. Yazzie. And the Trading Post Room sports rugs from Two Grey Hills and Ganado, where her cheis and nails are from.

Each room also includes information on the Shiprock Pinnacle, since that is the main attraction in her area, and each guest gets a keepsake refrigerator magnet featuring a photo Yazzie took herself of Tse Bit’ai at sunset.

Yazzie was hoping to meet some exotic foreigners, and she has — her very first guest was Russian. But there are also weary Americans on a cross-country drive who just can’t make the last 20 miles to Farmington and its motels.

“My guests are coming in very late at night, which is fine with me,” she said. But if you don’t want people disturbing you after bedtime, you can stipulate that — each host makes a list of “house rules.”

At Shash Diné, for example, you’re not allowed to arrive after sunset. “We’re an eco-retreat,” explained Meehan. “We don’t want people driving all over the virgin desert trying to find us in the dark.”

Respect for the land and Navajo traditions is something most Diné hosts worry about. “My family has been here for generations,” said Meehan, whose property is also a working ranch. “They hid in these canyons during the Long Walk, so I have a huge amount of respect for this land. We make sure people stick to the roads and trails. We explain to them how fragile the desert vegetation is, which, for people from a place like England, is hard to understand because they’re used to seeing grass everywhere.”

Before Verna Yazzie allows a guest into one of her hogans, she walks through it with them, explaining the spirituality of the way it’s constructed and why the door faces the east.

“People really appreciate knowing the story behind the hogan,” she said. “It makes it all the more special to them, and they respect it more.”

Some hosts offer guided tours of their area for an added charge. Verna Yazzie offers a hiking tour and for those who can’t walk that far, her brother will saddle up a couple of his horses and take them on a ride.

Shash Diné offers the “Navajo Experience” — a traditional mutton dinner, storytelling, an early morning photo tour, and for an extra fee, a personalized tour of the East Rim of the Grand Canyon. Meehan’s six-year-old daughter throws in an unbearably cute tour of the family’s animals for free.

Getting food is a problem at the more remote B&Bs, so hosts partner with food vendors or simply cook something at their own home and deliver it to their guests. Shash Diné has also partnered with a Navajo massage therapist and Reiki master in Page, Arizona, who will come out and work on a guest whose muscles are rebelling after a long hike.

Some of the hosts also have also started to pair up. Verna Yazzie has informal cross-referral agreements with both Shash Diné and Debra Yazzie, and Debra has been wanting to start an association of Navajo Airbnb hosts to trade referrals and tips.

All the hosts we interviewed said they would highly recommend starting a B&B as either full-time income or a side gig, although Verna worries the Monument Valley market is getting saturated, with more than 30 listings. (On the other hand, there’s not a single one near Chaco Canyon, another highly visited place on the rez, so there is plenty of opportunity in some places.)

In addition to making money, the hosts are very much aware that they may be one of the few Navajos their guests meet in their lives, and they feel both honored and obligated to represent their tribe well and make a good impression.

If they want to know how they are perceived, all they have to do is look up their guests’ comments on the website. “From the personal messages and comments provided by my guests on the Airbnb app, I have been able to provide a lot of insight to our Navajo people, land and culture,” Debra Yazzie said.