Missing 13-year-old may be walking streets in Gallup 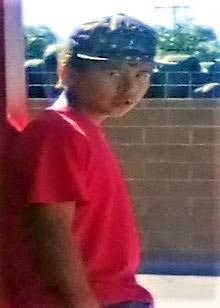 Courtesy Gallup Police Department
Gallup police say Angel Bennett, 13, was last seen on January 10 and may be walking around the streets in Gallup.

The Gallup Police Department is seeking the assistance of the general public to help them locate a missing juvenile.

According to Captain Erin Toadlena-Pablo with the Gallup Police Department, a 13-year-old boy named Angel Bennett was reported missing by his mother.

Bennett was last seen on January 10 at the Hacienda Motel located on the east side of Gallup.

Toadlena-Pablo said Bennett is 5-feet tall and weighs 115 pounds. He was last seen wearing khaki pants and a red and black jacket and may be with a female named Alvina Bitsilly. Toadlena-Pablo said she did not have a description or additional information on Bitsilly.

Toadlena-Pablo said Bennett was seen walking around the Gallup area with homeless and inebriated people, which she said was concerning considering the age of the juvenile.

“Our officers and detectives have been in contact with their sources trying to locate the boy,” said Toadlena-Pablo.

Anyone with information on Bennett’s whereabouts are urged to immediately contact the McKinley County Metro Dispatch at 505-722-2002, or the Gallup Police Department at 505-863-9365.