Winslow boys heat up from downtown to beat Tuba City 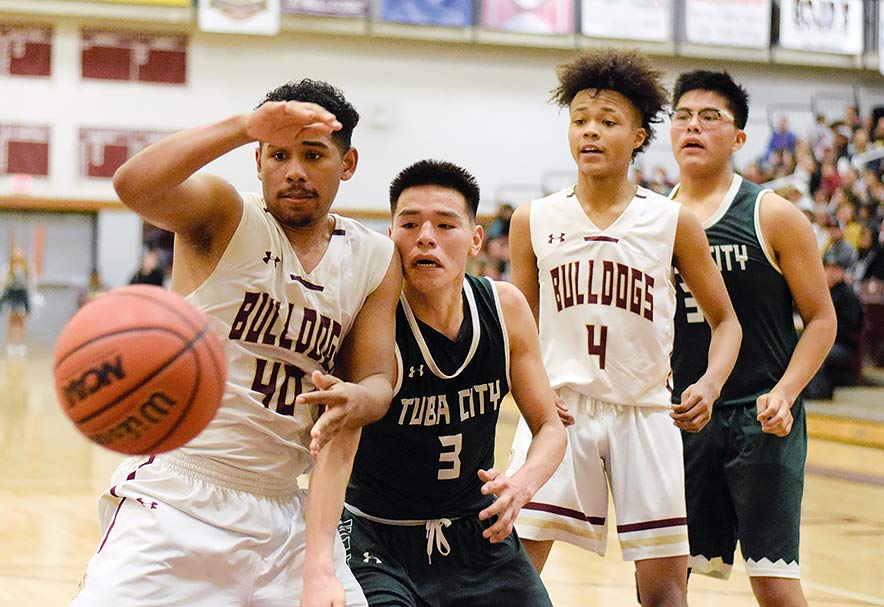 A barrage of three-point shots paved the way for the Winslow boys’ basketball team on Thursday night.

The Bulldogs nailed 13 treys en route to an 80-49 nonconference win over the Tuba City Warriors with junior Tyrell Young nailing six of them while teammate Zane Corum added three.

“When teams play zone on us sometimes we get some good looks from out there,” Winslow coach Scott Corum said.

The fourth-year coach said it was important for his team to knock those trifectas down; otherwise teams are going camp out on his two post players – Zach Wagner and Dustin Richard.

“I thought we had a nice inside-out game,” Corum said. “When we threw it into the high post our wings would relocate and we would kick it back out to those shooters. They did a good job of knocking those down.”

Early on it was Richardson who made his presence known as he helped the Bulldogs stake out a 9-4 cushion with three inside buckets.

Tuba City stayed within striking distance as a trey by Tyler Williams got the Warriors within 19-13 with 1:40 to go in the opening quarter but for the next six-plus minutes Winslow used a 18-6 run to build a 37-19 cushion.

In that stretch, Young scored nine of his game-high 24 points.

“I really think defense was the key tonight,” a humbled Young said. “I really didn’t care about the offense. We just wanted to work on our defense because once we play good defense our offense will click.”

Corum said he was real pleased with his team’s defensive effort as they hounded Tuba City the full length of the court. In particular, he said Richard did a good job of holding junior Jeremiah Byjoe to only seven points.

“We were real concerned with Byjoe,” said Corum. “We wanted Dustin to track him and stay wherever he went. I thought Dustin did a really good job. He’s our defensive stopper on the team.”

With Winslow zoning in on Byjoe, Tuba City had to look to others as sophomore Brittany Hardy and Desean Butler both finished with 11 points each.

Butler, who came off the bench, caused some matchup problems for Winslow with his size. In the third period, the Tuba City post player scored six points during a 9-3 run that got the Warriors within 51-39 with 3:24 to go in the period.

“He changed the game a little a bit,” Corum said. “We didn’t do a great job on being there for the help side and taking away the lob pass. He got good position and scored on us so we had to call a timeout to make some adjustments.”

Offensively, Winslow had 11 players score headed by Young’s 24 and Richard, who finished with 16 points.

“Dustin has added a lot to his game,” Corum said. “He’s added a three-point shot to his game so he can do it all. He can play on the block with his back to the basket; he can face the basket and put the ball on the floor and attack. He can spot up and shoot a 3 so there are so many different ways he can score and he can really cause problems for the other team.”

The Bulldogs also had Wagner finish in double figures with 10 points while Zane Corum added nine.

Winslow’s next game will be on Tuesday when they start 3A East play by hosting Show Low.

Tuba City, meanwhile, will tangle with Window Rock in Fort Defiance on Saturday.