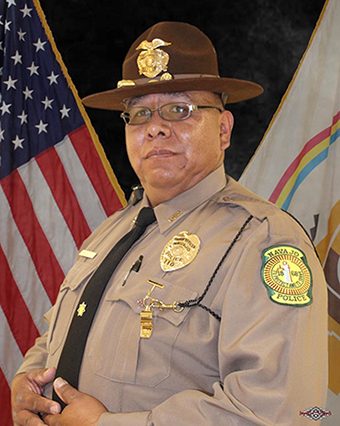 A 29-year Navajo Police veteran died in the line of duty on Friday morning.

Navajo Nation Police Officer Michael Lee, who worked with the Chinle District, died from the virus at Banner University Medical Center in Phoenix, according to a Friday news release.

Chief Phillip Francisco said the department was “devastated and heartbroken” by the news of his death.

“It is with great sorrow that the Navajo Police Department announces the passing of Officer Michael Lee,” Francisco said. “Officer Lee was a husband, a father, a son and a protector of his community.”

Lee graduated from the Navajo Law Enforcement Academy in Toyei, Arizona, in October 1990. During his 29 years of service, Lee worked as a Sex Offender Registration and Notification Act, or SORNA, officer, and worked in Window Rock for seven years at the beginning of his law enforcement career.

He served the Chinle community until his death, the news release said.

“We ask the public to join us in remembering his commitment and contribution to his community and to keep his family in your thoughts and prayers today,” Francisco said.

A procession for Lee began 2 p.m. from the Banner University Medical Center. The route for the procession will go through Payson on Arizona State Road 87, then State Road 260, through Heber-Overgaard, Arizona, then on to State Road 377 into Holbrook, Arizona, and eastbound on Interstate 40 to Rollie Mortuary in Gallup.

Gallup Police Department spokesperson Erin Toadlena-Pablo said Gallup Police was participating in the procession, which, she said, is expected to arrive to the mortuary this evening.

The procession is escorted by the Navajo Police Department, the Arizona Department of Public Safety, the New Mexico State Police, and other local law enforcement agencies.