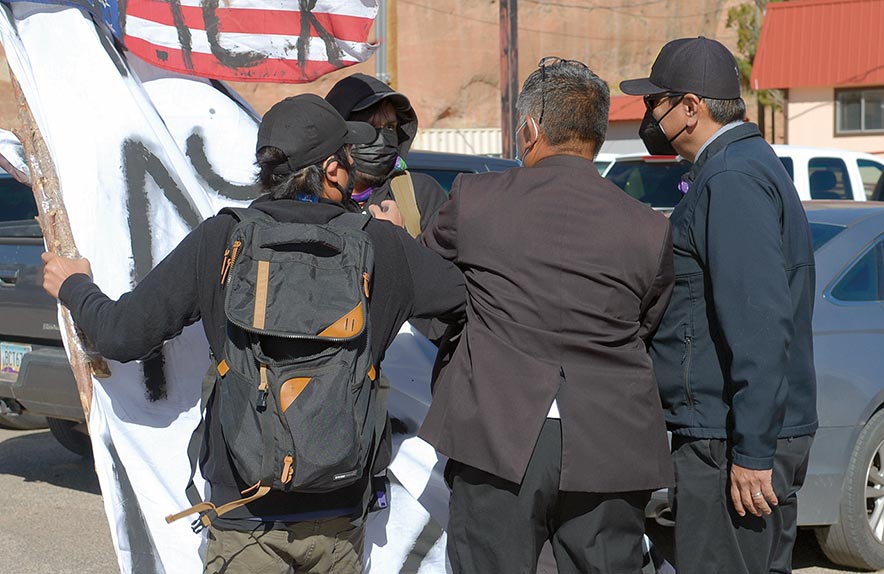 Navajo Times | Donovan Quintero
President Jonathan Nez, right, and protestor Kyle Curley, second from left, exchange words as Executive Security Marwin Joe, rushes between them on Monday in Window Rock. Curley alleges Nez attempted to grab his neck as he tried to move away from him. He said he filed a police report with the Window Rock Police District accusing the president of assault.

Kyle Curley and his brother, Kory, both from Fort Defiance, and in their 20s, were carrying a sign with “Resign Nez Lizer” written on it, began walking ahead of Nez and taunting him. As they were walking, the president approached them.

Nez was on his way back to his office to give his state of the nation address to the Navajo Nation Council’s fall session.

He offered to shake the brothers’ hands, but both rejected his hand and used expletive language as they asked Nez to get away as they walked backward away from the president.

Nez’s executive security, Marwin Joe, watched the three men speaking to one another. Kyle and Kory continued using expletive language to Nez, who was also speaking to them.

Kyle Curley said he and his brother were at the Council Chamber practicing their “freedom of speech on public property” and protesting the Nez-Lizer administration when the alleged incident took place.

“As we were walking towards the president’s office, the (executive security) told us as long as we didn’t get in his way,” Kyle said, “so we were off to the side, well off to the side, and (they) were saying things that we don’t agree with.”

Nez’s spokesman, Jared Touchin, refused to provide a comment: “No thanks. Have a good day,” Touchin said in a text on Tuesday.

Kyle Curley said they participated in the domestic violence awareness march to protest the administration for integrating their religious beliefs with politics, as well as not obeying their own COVID-19 public health policies.

He referenced outside Christian religion-based organizations coming onto the Navajo Nation during the height of the pandemic in 2020, providing donated food and other essential items. Kyle said the administration also made unauthorized travel in 2020 but did not mention who had done so.

The Navajo Times reported on Oct. 1, 2020, that Vice President Myron Lizer traveled to Washington, D.C., and participated in the Prayer March 2020, a Christian-faith-based gathering of about 50,000 people that was held at the National Mall.

At the time, Lizer was on travel to the U.S. Capitol, the tribe was under a 57-hour curfew that required Navajo people to stay home. Lizer was photographed and videoed not wearing a mask and not social distancing at the gathering.

“I was out in D.C.,” Lizer said. “I was invited by Franklin Graham of the Billy Graham Evangelistic Association.”

Lizer stood should-to-shoulder next to the former pastor and others for several minutes without a mask.

On Monday in Window Rock, Kyle Curley said, “And I don’t know if he, if it ticked him off, but he got to a point where he got really upset and he lunged forward and he tried to grab me, or he grabbed my sweater, but he tried to grab … my neck.”

Holly James, who participated in the march, said she saw Nez walking toward the brothers as they told Nez to stay away from them.

“Nez was walking by, there was two young gentlemen carrying a sign, which they were both on the parade route, both Nez and these two gentlemen,” James said. “The two boys were listening to speakers, and then Mr. Nez had passed by and (they) had said some words to him to start the conversation.”

James said she did not hear what was said but she quickly realized there “was some tension.”

“Mr. Nez, I saw him extending hand to shake the young boy’s hand, (but) prior to that the boys were asking Mr. Nez to stay away from them,” James said. “Mr. Nez kept approaching and the boys kept backing away and loudly and clearly stating, ‘Get away, get away from us.’”

“I did see Mr. Nez and the boy physically touch each other,” James said. “I don’t know who first. There was that big flag that was in way at that point.

“But I did see them physically touch each other,” she said. “And then that’s when the security guard had come over. The security guard was with the young boy and Mr. Nez backed off and continued to walk again.”

Kyle Curley said he went to the Window Rock Police District and filed a police report against Nez. He said by text he reported Nez for allegedly physically assaulting him. He added he was given a police log number and would not get the report until two days from Monday.

On Tuesday, Kyle Curley provided the Navajo Times a police report number (01-21-032122) and the name of the Navajo Police officer, T. Dustin, who he said took the information.

He said supporters of the two were seeking legal counsel to represent them.

Rumors of the brothers shaking Nez’s hands surfaced, but Kyle refuted the claim.

“There is no way I would ever let that awful person touch me or my brother,” Kyle Curley wrote in a text on Tuesday. “Nez has radical supporters who support violence and bullying.

“Three words can cause his supporters to literally say anything. In short, we did not, and never would have ever shook that man’s hand,” he said.

He added he and his brothers began receiving threats and said he would stop communicating with the Times for fear for their safety.

After the alleged incident occurred, Delegate Eugenia Charles-Newton said on her social media page that first lady Phefelia Herbert-Nez approached her as she was walking into the Council Chamber.

“The first lady came running up to me and she was, like, ‘This is all you guy’s fault. You guys entice this type of violence on my husband, shame on you,’” Charles-Newton said on Monday.

“The president’s security guard threatened them with being arrested and told them if they didn’t leave, they would be arrested,” Charles-Newton said. “I did make a speech saying perhaps that’s what we need to do to get police to come out, to address our issues to make a sign like that and put it out and get police to respond. But I’m not sure exactly what happened again.”

No arrests or injuries were reported as of Wednesday, Oct. 19.