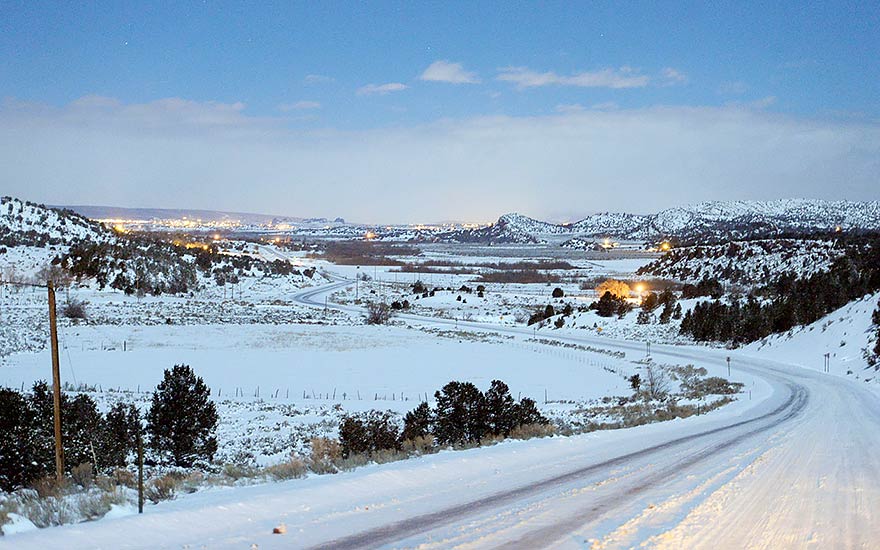 Navajo Times | Donovan Quintero
Recent snowstorms have made travel difficult across the Navajo Nation, and there's another big one headed our way.

After a lengthy debate last week during a special Council session, where delegates discussed how their communities were impacted by the recent snowstorms and were in need of emergency funds, the resolution sponsored by Council Delegate Mark Freeland and co-sponsored by Delegate Herman Daniels was approved 18-2.

“We are stewards of the Navajo people’s money,” said Council Delegate Rickie Nez, who voted for the bill. “I agree chapters need money. Yes, we can distribute money but let’s do it wisely. With this emergency funding we need to be wise.”

Wise spending is the sentiment Nez had in his memo to Speaker Seth Damon on why he vetoed the resolution. He said by declaring an emergency before the storm hit, he meant to put the chapters on notice to muster their resources. He stated many chapters took it upon themselves to provide resources to their community members. The chapters his office visited, he stated, told them they did not need the emergency assistance now but they were concerned about chapters in the higher elevations that could use the assistance.

“While the spirit and intent of the legislation is well meaning there is no need to appropriate more of the Navajo people’s money and take from the reserve account,” stated Nez.

The Office of the Controller has reported that there is only $47,555 in the Undesignated, Unreserved Fund Balance account, Nez stated, and with this appropriation the UUFB would be brought into a negative dollar amount.

“Further, waiving the Appropriations Act to invade the Minimum Fund Balance is not good stewardship of the People’s money,” stated Nez, who also said this type of spending would jeopardize the Nation’s credit rating because they don’t know the accurate balance of the UUFB and Minimum Fund Balance.

During the discussion, Council voted to allocate funding in two parts. Fifty percent of the $3 million appropriation would be distributed equally among the 110 chapters. The remaining 50 percent would have been appropriated proportionally to the number of the registered voters in each chapter.

“I know as Navajo Nation leadership we don’t always make the best decision in what is the best way to handle our people’s money,” said Council Delegate Nathaniel Brown, who was only one of two delegates to vote no. “When we sit here we are all not financial experts. We don’t have the education and background to forecast what that living market looks like.”