NM schools still not in compliance with court order 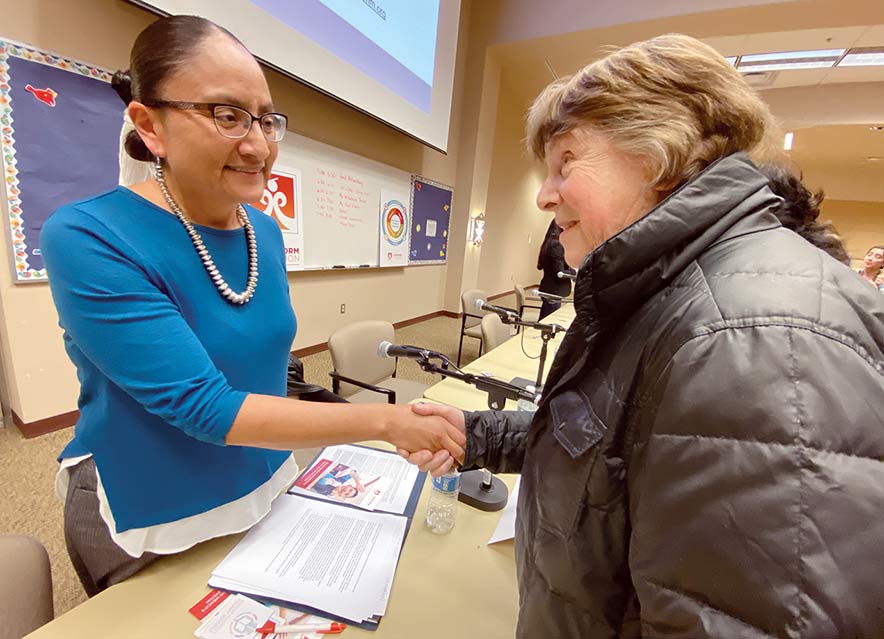 Navajo Times | Donovan Quintero
Wilhelmina Yazzie, left, shakes hands during a Jan. 15 meeting on the court order that was given regarding a lawsuit she filed against the state of New Mexico in 2014. Yazzie filed the suit when she discovered her son’s state constitutional rights were being violated by the state.

Xavier Nez’s mother, like any parent, wants what is best for her son – to become a successful and thriving adult.

His grades, says Nez’s mom, Wilhelmina Yazzie, were all A’s. The honor roll student was at the top of his class in third grade. She considered enrolling him into classes for gifted students.

Then she started seeing a troubling trend. Whenever he took the standardized test — the New Mexico Statewide Articulated Assessment Program — his scores were below what his grades were reflecting. NMSAB tests measure a student’s thinking skills in math, writing, and science.

Thinking he was not being properly taught the curriculum that would prepare him for the elementary school exam, Yazzie visited the school to inquire about it.

What she eventually found out was even more troubling. The state of New Mexico was violating her son’s constitutional rights, as well as those of other low-income students of color. She found out the state’s educational system was not meeting its constitutional obligation to provide an adequate and sufficient education.

So she filed a complaint stating the school lacked what her son needed for his education — even needs as basic as textbooks. Eventually, after repeatedly being told by school administrators they did not have the resources, Yazzie filed her suit against the state in 2014.

In her suit, Yazzie said the state was not funding public education enough, which meant Native American students, like her son, were not being given a chance to prepare for college and for whatever career paths they chose.

And were thus violating their constitutional rights, the New Mexico Indian Education Act and the Bi-Lingual Multicultural Education Act. In 2018, First Judicial District Court Judge Sarah Singleton, who is now deceased, agreed that Nez’s state constitutional rights were violated and ruled in favor of Yazzie, whose suit was consolidated with another similar suit filed by Louise Martinez. Stapleton ordered that the state must comply and gave them an April 2019 deadline to fix the matter.

But at a Jan. 15 meeting at the Gallup-McKinley County School District office, Yazzie said all she’s seen so far was a salary raise for teachers. “I know it’s a lot to do with the state, that kind of holds back everything,” Yazzie said on Jan. 15. “Cultural-wise, nothing really. Nothing yet that I know of. Other than that, I still struggle with my children getting into the required class that would really get them prepared for college.”

Yazzie also said the Gallup-McKinley County School District began working on a plan called Elevate 2022, for which she said she was “appreciative.” “Our school district, I know there are a lot of people that really want to help our students,” she said.

The goals that make up Elevate 2022, according to a letter from GMCS Superintendent Mike Hyatt, are to ensure students are college- and career-ready, recruit high quality staff, improve the academic environment, increase parent and community engagement, improve service to all stakeholders and manage the budget efficiently.

“Elevate 2022 strategically maps out what the district needs to do to ensure that all our students are on the path to graduate and be college- and career-ready,” Hyatt wrote.

The motion, according to Yazzie’s attorney, Gail Evans, claimed that in the 2019-20 school year, school districts in New Mexico used funding meant for at-risk students to fund school operations instead, like teacher salaries.

In 2008 the American Institutes for Research did a study of the state’s education funding. They found New Mexico’s public education system was underfunded by over $600 million. According to the Education Law Center, New Mexico public schools enroll 339,000 students and spend a little over $9,000 per student.

A large percentage of those students — 61 percent — are Latino, 25 percent are Caucasian, and 10 percent are Native American. “To actually provide this vast majority of students with the opportunities to which they are constitutionally entitled is going to take a complete transformation of the state’s school system, rather than a patchwork of weak remedies defendants propose,” Yazzie’s motion stated.

The “remedy” that New Mexico was proposing was “un-doing a few policies put in place by the last administration,” “making a few philosophical shifts” and adding monies to school budgets, which “does not even take us back to 2008 levels when adjusted for inflation,” charged Yazzie in her motion. While school districts like GMCS were attempting to fix their subpar educational system, Yazzie’s attorneys listed a number of concerns in their motion the state had not yet begun working on.

For instance, New Mexico only added $4 million to the Indian Education Fund and $7 million for bilingual programming. They also contend the state’s funding formula did not provide even 25 percent more funding for each at-risk student and was using Census poverty levels that were not appropriate.

To comply with Stapleton’s court order, a number of bills are being considered at the New Mexico Legislature. Eight of those bills, according to Transform Education New Mexico, a nonprofit organization that advocates for students of color, would pump billions of dollars into the state’s public education system if they are passed.

New Mexico House Bill 2, if passed as is, would appropriate more than $3 billion for public schools for fiscal year 2021. As of last Monday, House Bill 138, called Funding for Yazzie Lawsuit Responses, was passed by the House Education Committee and went to the House Appropriations and Finance Committee.

The bill, sponsored by Reps. Derrick J. Lente, D. Wonda Johnson, Anthony Allison and Patricia R. Caballero, would appropriate $18.4 million from the general funds to the Indian Affairs Department for fiscal years 2021 and 2022. Another bill, called the Federally Impacted Location Support PGM, which is not related to Yazzie’s lawsuit, was also steering its way through the Legislature.

Co-sponsored by New Mexico State Rep. Patty Lundstrom, it would appropriate more than $18.8 million for education. Related to federal impact aid, the bill would fund schools, such as those on reservations that don’t benefit from property tax mil levies, beginning in fiscal year 2021 through 2023.

It would partially make up for New Mexico’s long-denounced distribution of federal impact aid dollars, which go to all schools rather than just the ones on trust or public land.

Yazzie said she will continue to advocate for her son Xavier, who is now a junior at Miyamura High School, as well as other students because they deserve to know their Native roots. “They still do not have nothing specific for Navajo history,” Yazzie said.

“They have Navajo-related curriculum in Arizona schools. I wish we had that here in New Mexico to get students engaged. I think racism plays a big role. I don’t want them to ever be ashamed of who they are.”

Yazzie’s youngest son, Reece Black Moon, Lakota Sioux, a freshmen at Miyamura High, gets his teachings from his family back in South Dakota, she said, and has been learning about the Navajo way, too. She doesn’t think the benefits of the lawsuit will come in time for her sons, she said, but that’s OK, so long as the schools are forced to comply. “I teach what I know about Navajo history at home to my sons,” she said. “They’re wanting to learn more. He’s (Nez) very interested in his history.

He’s learning about the Long Walk. We were at an event and had to stand outside in the cold. And he says, ‘Hey, our ancestors went through worse, so this is nothing.’”

Here are the bills in the New Mexico Legislature pertaining to Yazzie/Martinez v. State of New Mexico: